Over the past month I’d been writing a detailed analysis of the state of the Maradonia movie, breaking down what we know, what we didn’t know, and what could be inferred from the semi-frequent posting of pictures to the Maradonia Facebook page. Then, just the other day, the Tesches up and released their movie trailer, which simultaneously answered the majority of my questions while negating the majority of my analysis. Thanks, guys!

At the time of writing, it’s April 2013, and Team Tesch seems completely focused on this movie. The final book in the Maradonia “Saga” was scheduled for publication in 2012 but has been more or less abandoned: there have been no updates regarding the publication date or any news regarding the climactic book in this tale whatsoever in over a year. It’s reasonable to assume there have been delays – hopefully because they’re extensively rewriting it – but the Tesches not acknowledging the delay leads me to believe they’re not even thinking about it.

Which is odd, since they have plenty of time. While Team Tesch is all about the movie, we know that Gloria has had time to post insipid videos to YouTube that are devoid of any content or even rational coherent thought, modeling on the runway, posting highly sexualized pictures of herself online, waxing philosophical about the state of today’s youth while taking the moral high ground over Jersey shore, and of course, directing and starring in the film adaption of her work.

What do we know about the project? The ball got rolling back in mid-2011, when Gerry Tesch apparently attempted to fuck over a few of his business partners, such as the director Troy Bowman and the cinematographer, Paulian Morris. 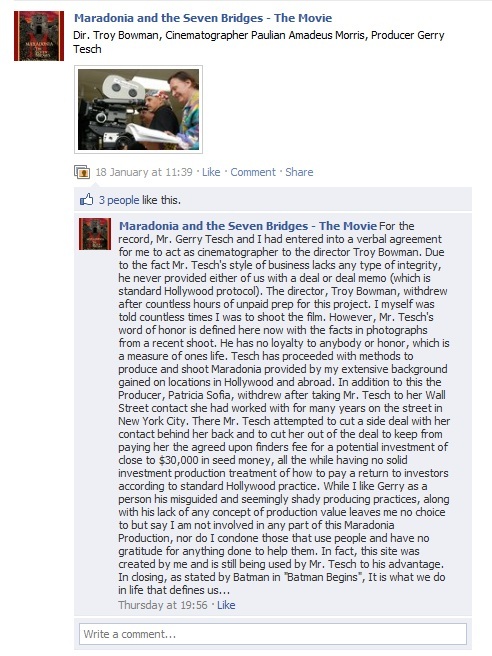 Gloria announced via newsletter that she hoped the movie would be finished by the end of April 2011. It’s now two years later and they appear to have about six minutes of godawful footage that they are shooting on a Canon Rebel T3i with a basic 18-55mm lens, which retails for about $550. 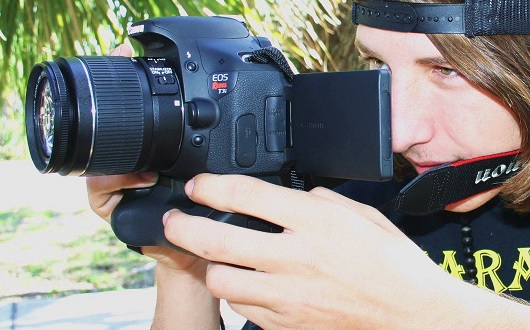 Now, I have nothing against the T3i – I own the exact same model camera, and for that price, it’s hard to beat it for shooting digital video. I’ve personally shot short films on it and they look great. However, if I had the money, I would upgrade to a better camera in a heartbeat. The fact that the Tesches have not done so is indicative they can’t afford to do so.

In the first version of this article, I spent most of the time talking about the single most important issue: money. We know that her parents have deep pockets, and there’s evidence that they have been able to talk a few others into investing. However, unlike book publishing, filmmaking is incredibly expensive. Even if you’re renting and borrowing equipment, calling in favors, blackmailing friends and family, and convincing actors to work for free because it will “build their IMDB resume” – moving trucks to build artificial caves and driving numerous vehicles out to different locations in Florida is not cheap.

Here’s the thing: no matter how hard you try, you cannot make a good fantasy movie cheaply. There’s a specific reason that most cheaply made independent films are set in modern times and have minimal special effects or excessive choreography, and the reason is that all of those things are fucking expensive. It’s true that some films can be made for the comparatively low price of $30,000, such as Kevin Smith’s Clerks. But let’s take a closer look at the actual costs for a film like that:

Consider a typical scene from Maradonia, where Maya and Joey arrived at a village and are greeted by a crowd of people, and what would go into creating that scene:

All of this is required…for a very simple, very short scene where they arrive at a village. And let’s not even get started about the level of special effects a Maradonia film would require, such as magical flying doves, talking snakes and grasshoppers and frogs and unicorns, and Maya and Joey riding a talking eagle covered in eyeballs, swimming with mermaids…the list goes on and on. And special effects, even if done cheaply that make your movie look like an absolute piece of shit, are still expensive and time-consuming to create. I’m not arguing that Hollywood doesn’t indulge in bloated  and unreasonable budgets, because they do, but there’s also a reason why each of the three Narnia movies cost between $150-$225 million dollars.

Of course, there are things the Tesches could do. They could absolutely gut the script. They could have every action sequence take place off-screen. They could use special effects created in MS Paint. They could reduce the entire story to a movie  that has Maya and Joey wandering through the underbrush and occasionally interacting with other humanoids in shitty plastic costumes. There exists a possibility that this film eventually does get finished. But, I think they will run out of money and the entire project will fall apart and be abandoned.

I desperately hope I am wrong. Nothing would bring me greater joy than the Tesches finishing and releasing this movie.

But even if that doesn’t happen, at least we have some footage we can look at and enjoy, because just the other day the Tesches released their movie trailer and launched an Indiegogo campaign to try and raise funds to continue work on their movie. In the original review, I noted that it was interesting that out of all the pictures released so far, they are were remarkably blasé. They featured dramatic shots of people walking, and staying, and lying, and occasionally looking mildly constipated. I wondered when they would get around to shooting an actual action sequence of some kind.

Turns out that the Tesches pulled a fast one on all of us: they weren’t shooting a movie at all! Sure, they said they were, and there’s a theoretical possibility that some of the footage they’ve shot thus far actually makes it into the finished project, but what they really have done is shoot a trailer to try and convince people to give them money so they can actually shoot a movie. Thus far, it’s proved wildly unsuccessful. Despite their amazing perks, most of the donations have been from Gloria Tesch herself, trying to show the campaign being successful. 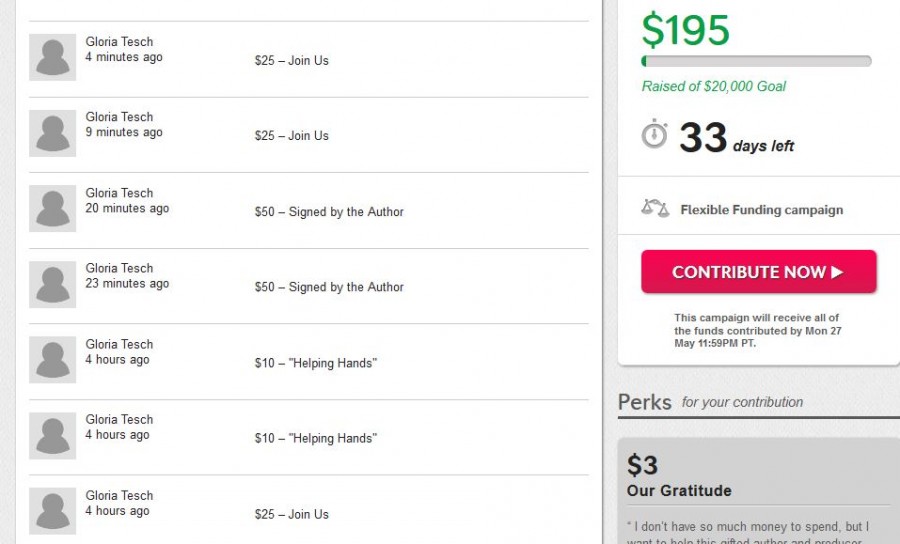 The campaign itself is brilliant, complete with underlined text, italics, Unnecessarily Capitalized Words, typos, atrocious grammar and syntax, and it concludes by comparing Gloria Tesch to Stephen King, Anne Rice, Stephanie Meyer, and J.K. Rowling, and then following up by saying that Gloria Tesch has authored 10 books when she’s actually released 5 (and technically two and a half, since she split them up).

Interesting, although the campaign is only for $20,000, in the description it stated that they will “need definitely” $1 million to complete the movie in the next “eight month”. After this was pointed out, the Tesches removed the text, but not before it was screenshotted  by a helpful Internet denizen.

Which brings us to the trailer itself.

I would like to really tear into the trailer, but I can’t. It’s everything I ever hoped and dreamed it would be.

I was worried, for a bit, that the Tesches might outdo themselves. That they might have hired some very smart, intelligent people who would be able to craft quality cinema and actually be making a movie worth watching, rather than a movie so eye-gougingly bad that it makes Birdemic look like The Godfather Part II. I should have known better than to doubt the Tesches, as they reached deep within themselves to create a trailer that, astonishingly, is even worse than the material it’s based on.

It’s hard to decide which is my favorite part: 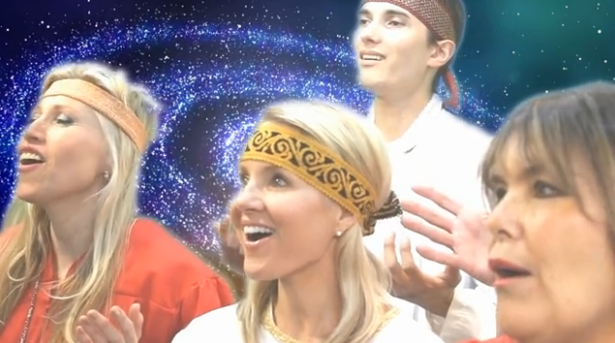 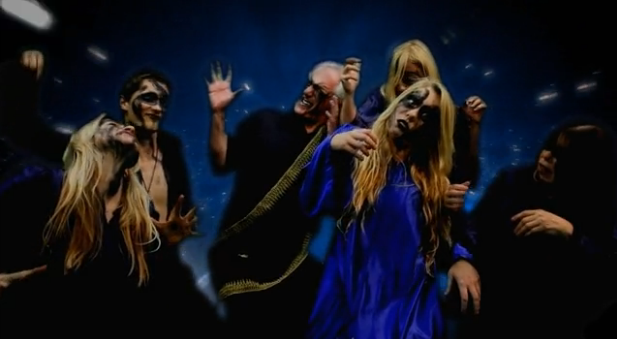 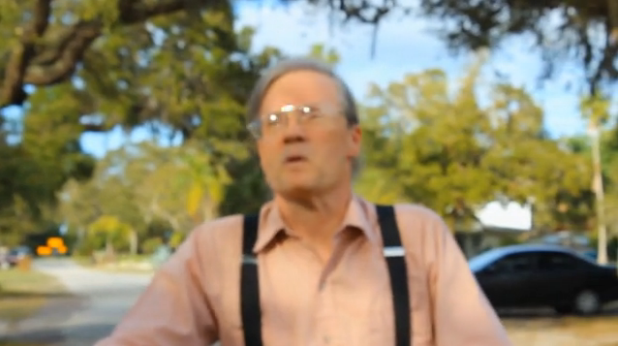 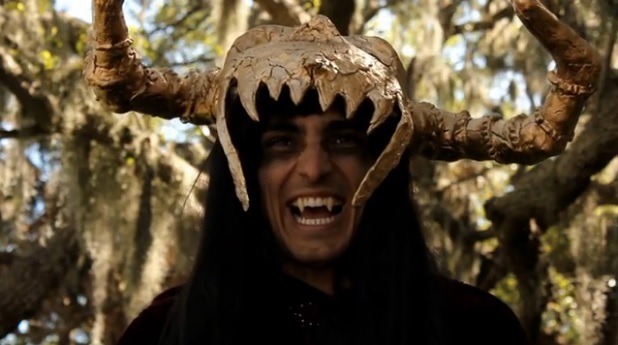 There are really no words that can do this trailer justice. Please, just watch it:

48 Responses to “The State of the Maradonia Movie”