The Secret of Moon Lake » Part 1: What Have I Gotten Myself Back In To?

We open up at the Acknowledgements page where Gloria – sorry, Sofia – thanks God, her father, her mother, her brothers, especially her “little munchkin” Benji. This’ll come back.

I honestly don’t know if Gloria has actually changed her name. Maybe it’s a pen name? She has a new handle on Twitter, at least, and some (but not all) old Maradonia and Gloria Tesch things have been nerfed. I’d guess that maybe she’s trying to distance herself from all the terrible reviews on Amazon for the Maradonia series, which is probably a good idea.

Chapter One – Swept Away

Maradonia is abysmal. It’s only up from there. This book looks…well, not professional, certainly, but…better? It looks like someone was formatting in Microsoft Word and told the program to add a line break at the end of every paragraph. So there’s huge gaps of blank space on every page of this book. Also, the spaces between each line are significantly larger than they should be, so this 340-page book is more like 200 pages. Which is funny for a couple reasons: Tesch clearly still thinks that longer is better, and two, this book is pretty obviously published through Kindle Direct Publishing, which is Amazon’s self-publishing platform. And when you publish via print-on-demand services for paperback books, you have to pay a fee for each book which is based on the size of the book. Longer, thicker books = higher fees = less royalties for you, the writer.

Gloria Tesch is literally losing a decent chunk of whatever money she makes on this book because she won’t just format the fucking book correctly.

Anyway. We get a little weird sequence where a kid named Sam Lawrence is drowning underwater, tangled in reeds, and then, in the midst of the panic of drowning, he thinks back on earlier that day before his life changed so drastically. Like you do, when drowning.

So Sam wakes up. His dad is making breakfast. He looks into the mirror and we get a description of Sam as he looks at himself. That’s a shot, guys. I’ve been in recovery for a few years now which is great and all but that’s a fucking shot. There is no trope I hate more than a character looking in the mirror for an infodump of what they look like.

Sam looks like a kid, nobody cares, and he’s thinking about Moon Lake and his fishing excursion with his friend Ethan. They are going to try and catch the ‘legendary “Big Bass” ’. Yes, that includes the quotation marks. Apparently, this fish is such a big deal people have been trying to catch him for years, and if Sam succeeds he’ll get his picture in the paper and Jessica, from his school, would finally pay attention to him! What a slow news day! And stakes!

[Quick aside: the writing is LIGHT YEARS ahead of Maradonia. Props to Gloria, I guess, for getting better at writing. It’s still not anything close to good. Still though. At this point, she’s vaulted past Stanek in the rankings, and she’s less than half his age! Way to go!] 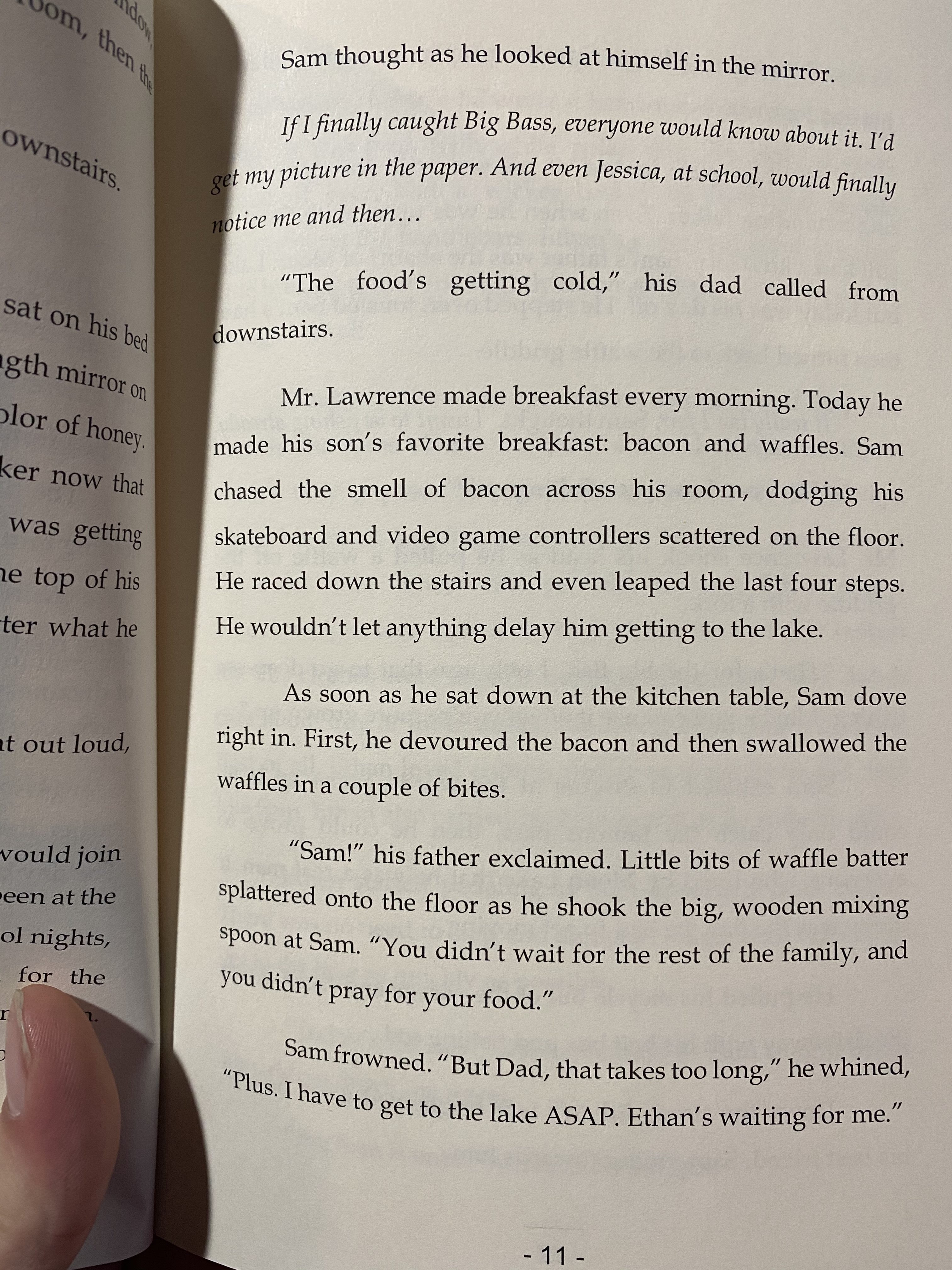 Apparently Sam’s dad makes breakfast every morning which I don’t believe at all since he’s the sheriff of Moon Lake and nobody makes breakfast every morning, unless you count throwing a box of cereal in the vague direction of the table. He yells at Sam that the food is getting cold so Sam bolts downstairs and starts eating. His dad then scolds him for not waiting for the others and not saying grace. Wait, the food was getting cold already but nobody else in the family was even there? What kind of shitty-ass cook is this sheriff? Keep that shit in the oven on warm.

While lecturing, Mr. Lawrence shakes the spoon at Sam, which splatters waffle batter everywhere. Maybe he is just an idiot. Mr. Lawrence insists that there is “always time for prayer” but then they move on and Sam doesn’t pray and nothing comes of it so I’m glad we spent time on this sequence. Sam gets his fishing rod and tackle box and heads off on his bicycle to meet his friend Ethan.

Ethan, we learn, has a pink polka-dotted hand-me-down bike from his sister and isn’t super popular at school because he “speaks his mind” which we’ll find later is code for “is a douchebag”. But they’ve been best friends since kindergarten and they’re both super duper into fishing which really doesn’t ring true. Like, I can buy some modern teens being obsessed with Fortnite, or becoming YouTube prankster stars, or making fun of shitty books being written by delusional authors, but fishing? Get the hell outta here.

They get to the trail to the lake which is next to “creepy old Mr. Brown’s house” and walk over to the lake:

“No one really knew how Moon Lake got its name. Most people in town thought the Native Americans, who used to live there, named it. The name made sense though. The lake was almost a perfect circle, connected on one side to a stream, and on the other to a larger river that eventually led all the way to the ocean. Moon Lake was so big you could hardly see the other side” (page 16).

In other words, everyone really knows how it got its name. Also, when standing at the water’s edge, you can see over eight miles. Eight miles across is a large-ass lake. I’m guessing Gloria Tesch does not have any real idea of how big this is. Let’s see if I’m right!

We learn the lake has a “notoriously strong current” that pulls swimmers towards the out-stream that used to be a river on page 16 but is a stream on page 17. And, okay. Lakes, kind’ve by definition, aren’t known for their super strong currents, and if you have a stream pouring into a lake and a river leading out it sounds like very quickly you won’t have a lake at all, but, sure, whatever.

Blah blah, our protagonists fish for a while and have a great time, so great they don’t even notice the dark clouds creeping in. And then they notice the clouds, and almost instantly it starts pouring down rain in sheets. They decide to get the fuck out of dodge but Sam’s line catches, and then there’s a lightning strike, which surprises him so much he falls straight into the drink. The current pulls him underwater into the reeds. It’s so dark and murky he can’t see more than a foot or two. Oh no! And then he sees something silvery, so he shouts in surprise, which turns out is a really bad idea when you’re underwater.