The Secret of Moon Lake » Part 2: I’m Starting To Remember Why I Quit Doing This Shit

So Sam is underwater, and drowning, maybe.

Underwater, Sam looked up and saw the surface above being pelted with the pouring rain (page 21).

You just told us the water was so murky he can’t see more than a foot. Just how deep is this supposed to be?

When he grabbed the reeds, they sliced into his hands like sharp knives (page 21).

Luckily, Sam’s able to escape this super strong current pulling him underwater that lakes totally have, and surfaces, even farther from the dock. He yells for Ethan but Ethan can’t hear him over the rain and then Ethan starts heading for the trail.

“Oh no! He didn’t see me fall and thinks I already left!” Sam said out loud to himself (page 22).

First of all, people absolutely don’t say shit like this to themselves OUT LOUD and even less so when treading water in a rainstorm after nearly drowning. Also, what kind of chucklefuck is Ethan? You don’t even notice the only other person there fall into a goddamned lake, or notice the waves and splashing, and then when you notice he’s gone you just assume that they left without you and you didn’t just…see them?

Sam tries to swim back to the dock but the current is too strong so he relaxes and floats on his back. Which is actually a smart call. He floats on his back for a long time and finally the current disappears and he’s on the opposite side of the lake, a nice eight-mile float. Turns out when there’s a strong current in a lake, it doesn’t take you to the river stream flowing out of the lake. I’m learning all sorts of things today!

Sam shouts “Thank God!” and wades in. It’s foggy and damp and muddy. He sees a house-shape in the distance and heads through the forest toward it. Upon arrival he sees it’s a run-down boathouse with a broken door. He goes inside.

Rotten barnacles hugged the bottom of the canoe (page 24).

Barnacles are in marine water, not freshwater, Tesch. Google is your friend.

Then the floor beneath him collapsed. Sam screamed at the top of his lungs (page 24)

Don’t worry, dear reader. He just falls six inches and ends up in ankle-deep mud. He climbs out, all disgusted, but sees a shiny object in the mud. Sam pulls it out, and holy shit, it’s a medallion on a chain, with a big turquoise jewel and a bunch of symbols and shit. And…he feels different somehow. The medallion is beautiful, and he feels excited, but simultaneously numb, like there’s some weird magic going on. Okay, so it’s the One Ring.

“Looks like treasure,” Sam said, smiling, “This should be in my collection.” (page 27)

Or, “Looks like treasure,” Sam said, smiling, “I wonder if this gemstone is real, and if so, how much fucking money I can make by selling it?”

Sam is distracted because the forest goes Quiet, all the frogs and crickets and birds go silent, and he gets a weird feeling like Someone is watching him. Then there’s this terribly loud noise like nails on a chalkboard, all horrifying and very scary. Sam decides to leave by announcing it out loud, and takes off sprinting through the woods. But he trips and falls down and scrapes his elbow and then he’s grabbed by an arm! Oh no!

It’s Chief Larson, who is the police chief of the town. Sam’s dad is the sheriff of the county, and Chief Larson is over the town police. Which is, in fact, something that does happen. Well done, Tesch. I sure hope this will pay off in some way later in the book!

We learn Sam doesn’t like Chief Larson because he never smiles and stuff. Larson asks Sam what is going on and Sam tells the truth and then two more people show up, Officer Darby, who Sam knows, and some strange man holding a weird metal box. The stranger mentions “frequencies” and “a disturbance in the reading” and then notices Sam and asks him if he saw anything unusual. Sam says no. And Sam doesn’t ask about that super loud awful sound that just happened, or why they’re all out wandering around in the woods, or really anything a reasonably inquisitive teen might ask. No real reason, of course, except that Tesch is way too poor a writer to make that happen. Like, if you want to set something up for later, just have Sam ask and they give vague cagey answers and then Sam can be all what is it they aren’t telling me and just like that you’ve introduced some dramatic tension into your book. This being Gloria Tesch, tension is not allowed.

Anyway, Sam decides that he won’t tell anyone about the medallion he found and the chapter ends.

The cops drive him home and his parents are elated and hug him and tell him to get out of the wet clothes before he catches his death of cold and all that stuff. His sister, Leah, walks in, all seventeen and wearing a burgundy dress with long dark flowing hair and green eyes.

Sam hated to admit it but Leah was pretty (page 34). 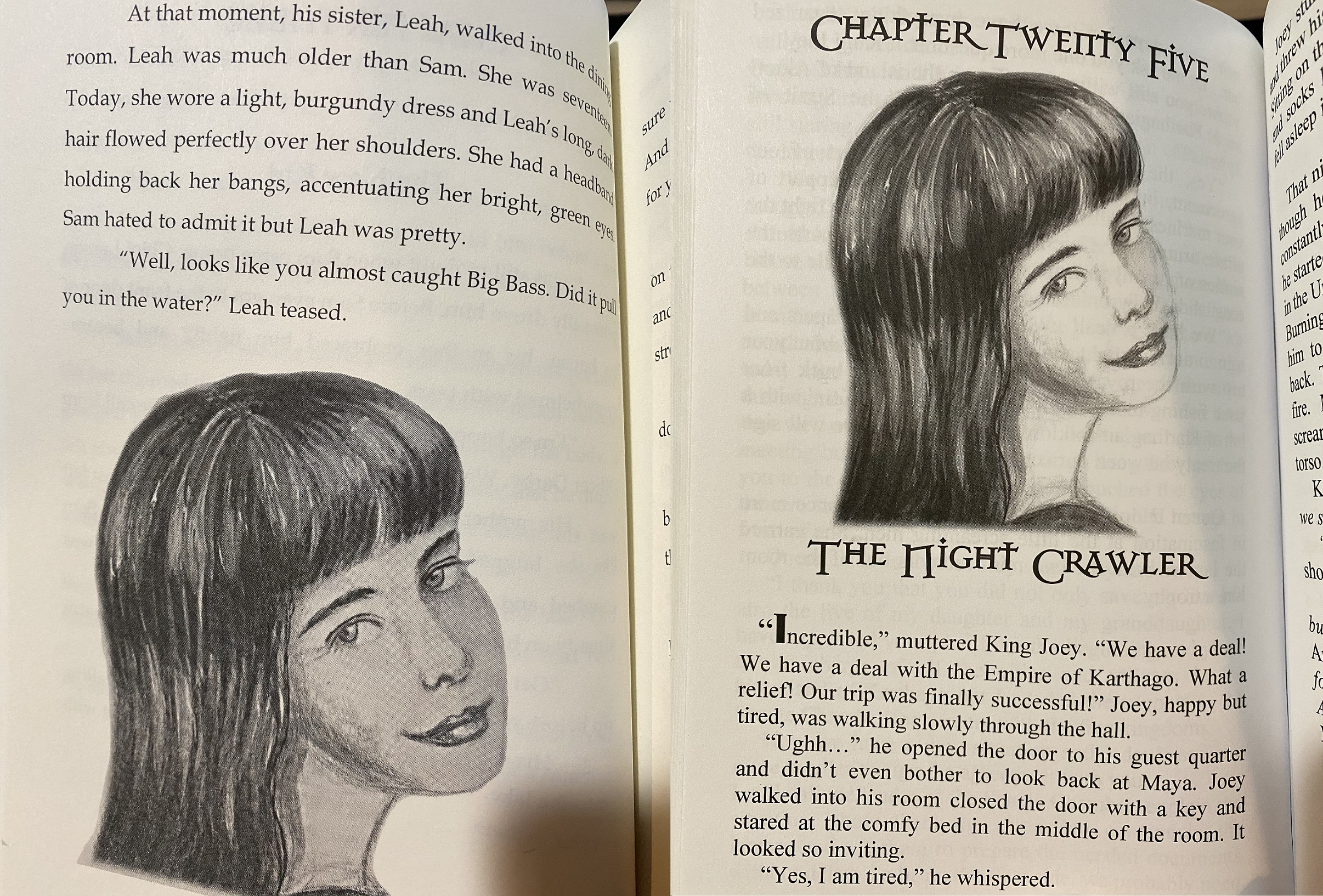 Yes, this book is also illustrated by Gloria Tesch’s mom, and no, her weird-ass art style – if you can call it such a thing – hasn’t improved. That’s probably because they aren’t actually new drawing. This new illustration of 17-year-old Leah was previously featured on page 206 of Maradonia and the Law of Blood. That time it was on 12-year-old Princess Adele because who wouldn’t recycle illustrations of girls five years apart in age? Full disclosure, I didn’t even realize this when I first put this section up and I’m a little pissed at myself, but in my defense, that was eight years ago and those days were kind’ve a blur.

I did notice, however, when paging through this book when I first got it, that several other illustrations were obviously copied from the Maradonia books. I’m honestly not sure if any of these illustrations are new. Maybe the giant ugly fish we’ll see a bit later? New thing to drink for, gentle readers.

Back on topic. Also, that’s a weird thing for a teenage boy to be thinking about his teenage sister. Leah teases him about not catching Big Bass, and then Sam notices a white truck outside across the street and a black SUV pulling up. Apparently they have new neighbors moving in, right as the sun goes down. A boy and his parents get out of the SUV. The boy has weird slacks and a sweater, so Leah jokes that he “looks like a businessman” which is definitely how 17-year-olds describe things. Sam realises that he recognizes the father though – it was that sketchy man with the weird box he met earlier next to the lake! What a coincidence that after falling in a lake and having a current pull you eight miles across it instead of the direction that currents flow and you randomly meet a weird dude in the forest that that same man is ALSO moving in across the street from you later that night! Holy X-Files Batman!

Despite the fact that the sun is setting the movers start carrying all the furniture inside and, luckily, even though you wouldn’t be able to see shit, Sam is able to see exactly what everything is:

Masses of large canvases with oil and watercolor paintings. Most of them looked fierce, dark and ancient. Strange mythological creatures were painted on them like dragons, unicorns, griffins (page 36).

Anyway, an older boy around Leah’s age gets out, all stylish and wearing “big headphones”. Sam teases Leah about him and Leah is instantly smitten with a doglike head tilt and a hair twirl.

We cut forward. It’s dark now, so Sam and Leah are outside watching everyone unload the moving van. In the dark. Sam wants to say hello, so finally they go over and he asks the younger boy if they need any help. The boy says he’s not sure if his parents are okay with that, and Sam notices he has a strange accent. His mother comes out and we learn the boy’s name is Alex, and his mother is “Mrs. Fisher”. Mrs. Fisher has a strange skirt and lots of necklaces and tassels and long wild hair and we’re about to learn they just moved to the US from Romania. Sam thinks that Leah would call Mrs. Fisher a hippie. I kinda feel like Tesch is about to reveal some racist shit she thinks about gypsies. Let’s see who is right!

There’s introductions all round, and we learn the older son is named Marcus and he makes music and he’s “a popular DJ in Romania” so he and Leah split off to listen to music on his wireless Beats by Dre. Sam and Alex opt to keep help unloading and share some incredibly awkward small talk. Sam says ‘Alex Fisher’ is a cool name because “that’s a good reason to be a fisherman!” as if that makes any sense. Alex, meanwhile, has never fished before.

As they carry boxes through the house Sam peeks through an open door and sees a desk covered in unusual electronics and computer screens, which is weird, since this family is literally just moving in, but okay. We learn the Fishers are half Romanian and half Scandinavian. Interesting. In Romanian, that would be ‘Fischer’ so maybe…no, in Danish, it’s also ‘Fischer’. Great work, Gloria! They used to live in Bucharest but Mrs. Fisher wanted to live in a smaller city like Moon Lake so…they moved to America? Turns out Mr. Fisher just got a job here as well, though. File that under ‘obvious, albeit confusing foreshadowing’.

Sam needs to head home, but stops to peek into the strange room on the way out. Mr. Fisher notices and slams the door shut with an angry glare. Holy shit! I bet he’s up to something!

Sam and Leah meet up outside the house. Leah thinks Marcus is “a little odd but cute” but the rest of the family is kind of weird. Outwardly, Sam disagrees, but inside he thinks the Fishers are fairly odd, because modern kids use words like odd instead of weird. He wonders about all the weird technology in the room but not about why Mr. Fisher was out in the woods with some cops, presumably because he’s a moron.

They roll inside and as Sam is about to go into his bedroom he hears his parents talking downstairs about something strange:

“We haven’t had this kind of occurrence in Moon Lake for nearly fifty years.”

“…We don’t know where or what it’s coming from…” Mr. Lawrence paused and picked up his sheriff’s bag. “I don’t understand. It’s like some kind of an echo, and we simply can’t pinpoint the source.” (page 46)

A floorboard creaks under Sam’s foot and he freaks out because he’s worried his parents will catch him dropping some eaves. To avoid suspicion, he loudly announces how good the house smells and asks what’s for dinner.

Okay. We don’t have a location but it’s implied this is New England. It can’t be winter because Sam would have died of hypothermia already, so that puts a summer sunset around 8pm. So now it’s around 9pm and his mother is in the process of cooking dinner?

This is not hard, Tesch. These are the things even very terrible writers can get right.