The Tesches recently re-launched their website – http://maradonia.com/ – which manages to look more professional than any previous iteration while maintaining the utter ineptitude we all know and appreciate. According to the site, they are currently in post-production [!] on the Maradonia movie – now titled Maradonia – the Shadow Empire – which is 140 minutes long and “Coming Soon to a theater near you”.

Yeah, I doubt that. With any luck, we can buy a produced-on-demand DVD or a digital download, but no theater will be showing this garbage unless Gloria’s father rents out an entire theater for the world premiere. Which, come to think of it, I’m sure he’ll do.

The website lists each of the 6 Maradonia books (along with their page count, for some reason) and it states they’re published, even though Maradonia and the Battle for the Key was never published and made available for purchase. It also randomly says “3400 pages of Brimming Adventure” beneath the embedded YouTube trailer. Okay, since you helpfully included your page count, let’s do some quick math: 379 + 354 + 353 + 441 + 418 + 335 = 2280. You suck at math.

More interestingly, there is now another author listed: 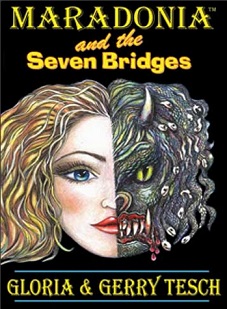 I admit, I kinda always assumed that Gloria had help writing the books from her parents, but not too much help, since, you know, they’re terrible. But now that they’re coming right out and saying it, it raises two points:

Setting that aside, let’s get to the trailer. Which is nine minutes long.

We open with angelic vocalizing as text cheerfully explains that Maradonia is “a world between the worlds”. Um. No, not really, it’s another world, but okay. Text reiterates the “3400 pages”, as if the page count of the book is supposed to build up excitement for the movie. Imagine of trailers for Lord of the Rings

were crowing about how long the books were?

There’s a series of bits of text appearing on the screen about prophecy and passion, which don’t really make sense in any context. It’s a trailer, why are we spending time reading? 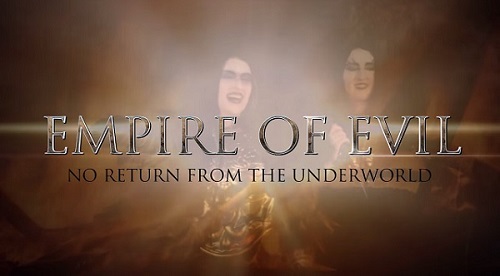 We learn there’s an Empire of Evil which also has something to do with no return from the underworld, which is weird, considering the second book in the series is called “Escape from the Underworld” and it’s about them…escaping from the underworld. I really don’t know what they’re trying to accomplish with this. 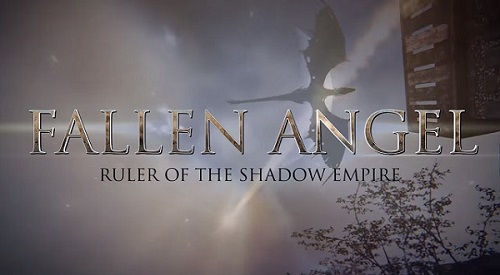 I’m guessing the fallen angel refers to Apollyon. The books never drew any parallels between Apollyon and Lucifer, despite the rest of their Bible plagiarism, however, the first Maradonia trailer explicitly made reference to it.

Then we learn that – 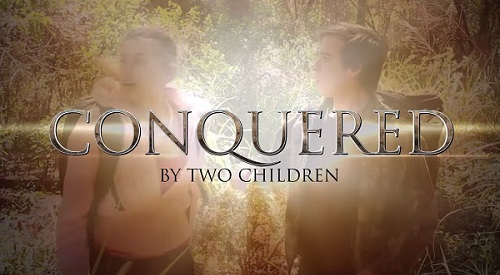 Oh come on! Spoiler alert! Why would you tell us that the kids are going to win??? 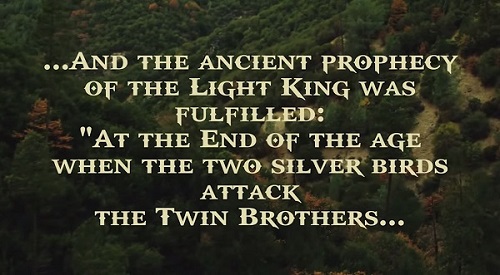 …by which I mean more text on the screen. And they STILL have the 9/11 references. How has this been in development this long and they still haven’t had anyone tell them what a stupid fucking decision that is? So according to this prophecy, when 3,000 people are murdered, sparking off multiple wars and tens of thousands of deaths in the ensuing conflicts, a couple of kids get to ignore the problems in their own world and peace out to the mystical magical land of Maradonia to fix problems there.

In their defense, all of this text is set over some nice soaring helicopter shots over a beautiful valley, which I’m sure was the best stock footage money could buy. 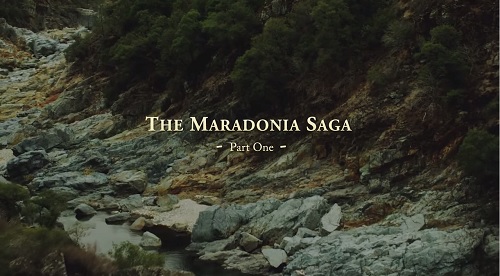 Apparently there will be more Maradonia movies after this one! I pray to Cthulhu that this will actually happen. 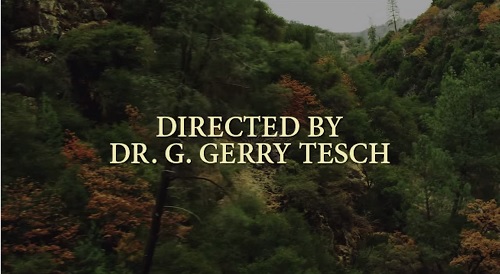 And then we learn who directed this. Her father. Of course. God forbid they hire an actual film director who knows what the hell he’s doing. And didn’t they make a big deal about Gloria herself doing some directing? And camerawork? As well as writing the script and starring in the film? Either way, I’m sure it’s a family endeavor.

Anyway, hopefully you enjoyed these nice helicopter shots, because we’re not going to see professional quality footage for a while. 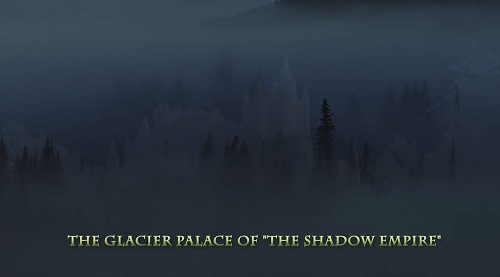 This one may literally have been drawn in crayon.

Next there’s a really, really, really bad CGI shot of a paper-mache dragon flying overhead. Actually, it may just be a single sheet of paper cut in an approximate dragon shape that is being swooped over the camera on a wire. 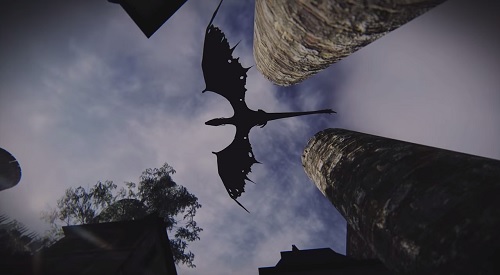 It’s not the worst flying effect I’ve ever seen, but that’s only because Birdemic

There’s a far-too-long shot of people riding horses through a forest – that goes in and out of focus, as an extra feature – someone obviously left the autofocus on, which is the type of mistake they go over not making on the first day of any introductory high school class on filmmaking. We get a static shot of a random castle as horses whinny and dramatic music plays! And then…low production! 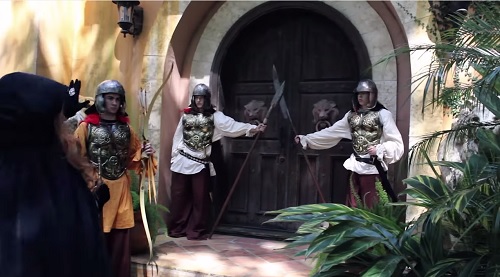 A black-robed figure strides past several guards (who are clearly high schoolers) wearing obviously toy plastic armor. And this is why you don’t try to make medieval fantasy movies without a budget. It looks like shit.

We’re now 2:15 in this trailer – longer than most actual trailers in their entirety – and still nothing has happened.

Still, the lion door-knockers with their spooky magical lightning and eyes that burst into yellow CGI flame do look kinda cool. 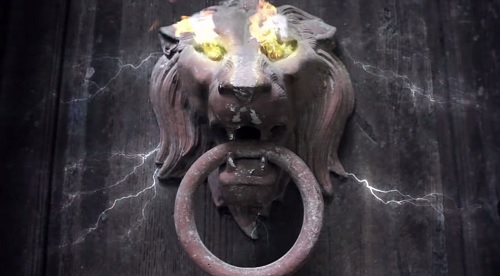 The power of Aslan compells you!

After another establishing castle shot that features the sky turning red, we’re treated to an eclipse and yet ANOTHER title card…and people began singing! When I first watched the trailer I thought they were singing the word “Manitobia” over and over again, which was confusing, until I realized they’re actually supposed to be singing “Maradonia” with an odd accent.

An evil-looking man shouts about “going for the kill”. I’m guessing he’s supposed to be one of the bad guys – Apollyon or Abbadon, no doubt. 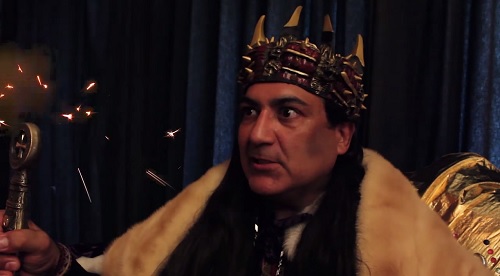 Wait, what happened to that other bad guy from that other trailer? You know, this douchebag: 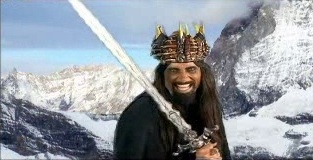 Maybe he was re-cast because his performance was too subtle. 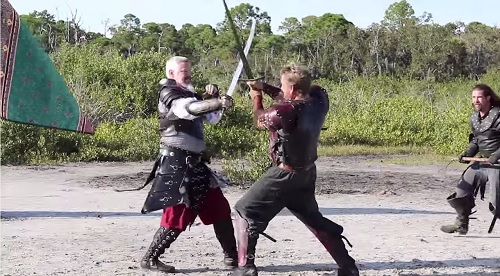 There’s a moment or two of impressively bad choreography from some LARPers the production dug up somewhere, and we promptly cut into some terrible-quality stock footage of some battle that looks like it was filmed in the 1950s: 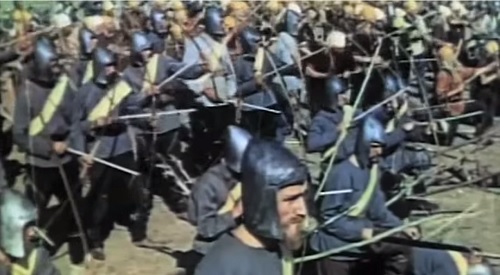 Does anyone know what film this is from?

There’s a few action shots – a boy with a toy bunny finding a corpse, Maya and Joey running through Florida with CGI explosions around them, more fire-breathing paper-mache dragons, and a dude with a katana screaming in the jungle, and a modern-day city. 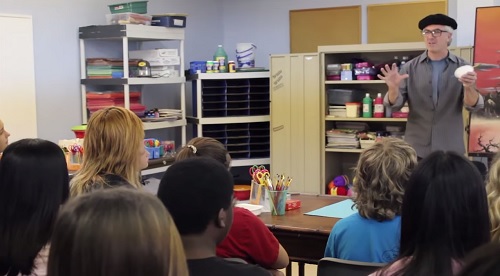 We cut into a school classroom where a teacher is raving about “the color just POPS off the canvas”. This is undoubtedly Joey’s poster that won a contest and earned him a letter from a congressman and a banquet in his honor. Yes, all that actually happens in this book, and I’m so glad it’s made it into the movie as well. 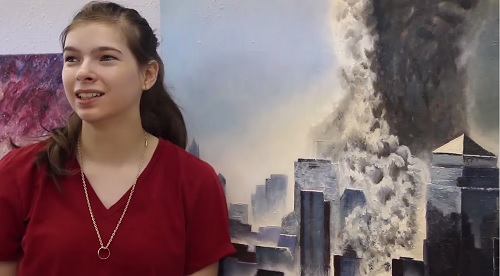 A young lady freaks out about where the evil is coming from, standing in front of a painting which I believe is depicting 9/11. The evil bad guy spits out an IceCreamKoan, and then we meet…a random underling? Abbadon himself? 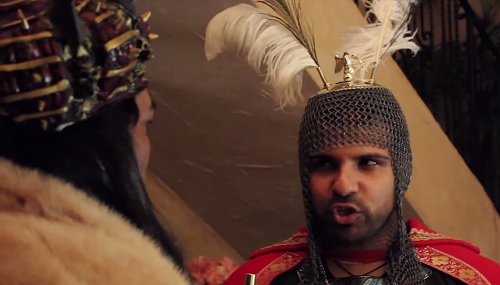 Have you ever heard of “peacocking”?

He rambles about how easy it would be to kill Maya and Joey, but all I can really see is his hat. It’s like some golden skullcap over his chain mail that’s set with an eagle figurine and four feathers. It’s simultaneously the silliest and least threatening thing I’ve ever seen, and this is supposed to be one of our Big Baddies. 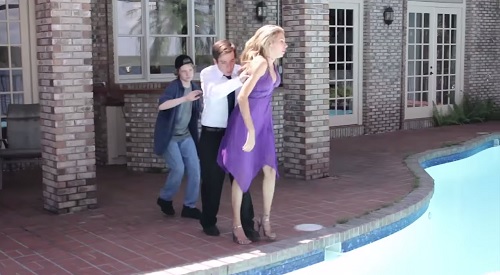 She’s not anticipating the push at all.

We catch a glimpse of Joey shoving his sister into the pool, and Maya floating face-down, and a mermaid-fin, which is all well and good. Some random shots of Maya and Joey being unable to act and exploring a cave, which we already saw in the last trailer.

And then we get this: 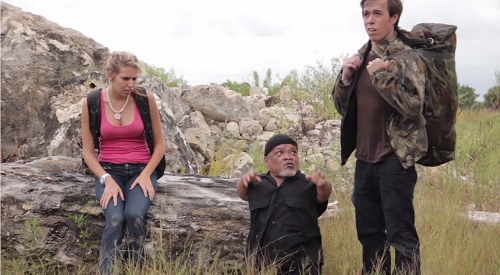 , in the re-released versions of the books, Hoppy (the grasshopper) appears and then turns into a dwarf. I’m guessing this is him. (H/T to brilliant reader Chris) I can’t really concentrate on what the guy is saying (something about ravens) because the wind is blowing his shirt up, revealing his belly.

They meet a snake with a snake that turns into a middle-aged women holding a snake who can’t act, and a kindly old man who starts a CGI fire with his staff, and some hooded witches who cackle and scream in the most over-the-top manner possible. I realize most of these actors realize they’re in a horrible D-lister movie, so they might as well go nuts with what extremely limited acting skills they have, but honestly, if you’re trying to do something on no budget, just make your actors commit to it. It’s like plays – people suspend their disbelief and stop thinking about the fact that actors are standing in front of a big black curtain.

After some random shots, Maya gives Joey a very fake-looking (but richly deserved) slap across the face, which I can appreciate.

A random witch doctor sings while CGI fire spreads around him. 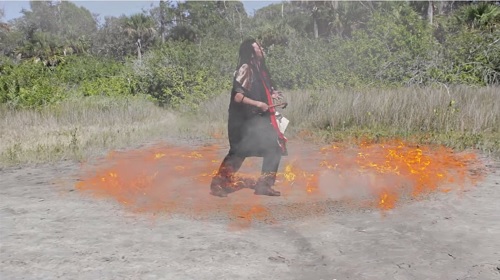 It’s not convincing, even when he tries to call the spirit of “Gary” [???] to come forth. Nor is Maya trying to dramatically recite a Bible verse in front of a crowd of unseen people. Most especially is a scene of the elderly wizard shooting magic-bolts of very bad CGI dirt-explosions that incapacitate some soldiers.

One incredibly bad paper-mache dragon flying over an incredibly bad CGI castle later, and we get more shots of horses pulling carts, people riding on horses, people sitting and trying to look astonished, and inane dialogue. The music builds to a crescendo, and we get…naked Maya! 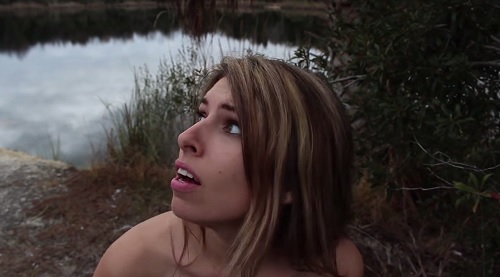 How the hell do I get out of this movie?

Or partially naked. I assume Gloria is contractually obligated to have at least one bathing suit scene in this movie to help her modelling career.

After some horror-movie-shots of people being tortured in a basement, we gather around the table of Apollyon’s council. Unfortunately, they don’t sing the Mother Earth Song. Fortunately, one of them randomly exposits: “Fire! Explosions! People will die!”

Then there’s a dude talking to a snake, which he calls “Leviathan” for some weird reason, and then he….then he…really awkwardly, of course…uh….puts the snake in his mouth. And it’s pretty obviously a live snake that he does this to. I’m not sure if he’s trying to eat the snake, or make out with the snake, or simply assert his dominance over the snake.  It is clear he’s trying to make sure he doesn’t hurt the snake, of course, but I wonder if the American Humane Society was monitoring this scene.

27 Responses to “The Maradonia Movie Trailer”