The Lord of the Rings Spork, Part One

I realize that this is probably going to be a rather controversial spork. My past sporks have been (mostly) of reasonably obscure self-published fantasy books, and generally books that are more or less universally agreed upon as being absolute shit. Sure, Gloria Tesch’s parents think she is amazing, and I know Robert Stanek has at least one fan, but Tolkien? The man is considered the father of modern fantasy. His books are still wildly popular, and were adapted into movies that were also wildly popular.

On the other hand, Christopher Paolini and Stephenie Meyer are also wildly popular and have sold millions of copies of books, and both of them are absolutely terrible writers.

Tolkien’s influence on the fantasy genre is undeniable, and his success is nothing short of amazing. And, while some critics cite him as being a master world builder (I will argue otherwise), there are many who point out his shallow, two-dimensional characters, poor characterization, dragging plot, and the general bloated lifelessness that is Lord of the Rings.

I’ll be honest with you. I hate The Lord of the Rings with the passion of a fiery thousand suns. I think Tolkien was an atrociously bad writer and a hack. And I’m going to tell you exactly why.

My copy opens with a note on the text, which I couldn’t care less about, and then a forward by Tolkien himself, with some pretentious rambling about the writing of the novel, mostly detailing how long and difficult it was to write. Great, Tolkien, try and score some sympathy points right off the bat. Here’s an idea: if you’re going to spend TEN YEARS writing a book, why don’t you make it suck less?

This book is largely concerned with Hobbits, and from its pages a reader may discover much of their character and a little of their history (page 1).

Except, of course, hobbits don’t exist. Tolkien’s going to have lots of these little moments where he breaks the fourth wall to have his narrator explain random bits of trivia about his made-up world. In this case, he decided to begin his book with FIFTEEN PAGES OF INFODUMP about Hobbits. I’m dead serious. The worst part is that the book itself doesn’t begin on that badly of a note – it starts off talking about Bilbo Baggins’ birthday party, and the preparations for it, which is reasonably entertaining and actually starts propelling the plot along (to a point). If Tolkien was actually talented at this whole writing business, we would start there – you know, at Chapter One – and then he could work in the relevant details about Hobbits as we went along.

Tolkien name-drops The Hobbit, that shitty prequel to TLOTR that spawned reader interest into this literary abortion. You know you’re reading true literature when the author mentions a previous book he’s written and it’s mentioned inside the text of the next book.

They were, as a rule, shy of ‘the Big Folk’, as they call us, and now they avoid us with dismay and are becoming hard to find (page 1).

Because Hobbits really exist, kids. They’re just shy of us.

According to the Red Book (page 2)

I’ll touch on this briefly and then try to stop ranting about it because it’s something that pissed me off, and if I rant about it every time it occurs, I’ll never get through this trilogy, and it’s pretty fucking long anyway. I mentioned a moment ago about Tolkien breaking the fourth wall, but it’s a little more complicated than that. Periodically, he decides to pull out his narrator to inform the audience of things, but the really weird thing is that he tries to pretend that The Lord of the Rings is some kind of weird alternate history version of Earth, where Hobbits and Elfs and Dwarfs all exist. In Tolkien’s mind, The Hobbit (the prequel to TLOTR) was written by the protagonist Bilbo Baggins, but as the “Red Book” or “There and Back Again”. I’m not really sure if he was doing a whole “I just found this book and translated it” gimmick, but that wouldn’t surprise me. This was a man so full of himself that he would speak Elvish, the made-up language he invented, with his wife. How sickeningly pretentious can you get?

Tolkien rambles for a bit describing what Hobbits look like (fat midgets) and then he launches into a lot of backstory and goes into the different breeds (Yes. He says breeds) of Hobbits, and dives into a bunch of genealogy. It’s about as entertaining as reading the book of Numbers in the Bible.

Eventually he gets around to the subject of Hobbit-holes. If you’ve been living under a rock, you’re probably unaware that Hobbits live underground in the somewhat obviously named Hobbit-holes. Well, not all of them:

Actually in the Shire in Bilbo’s days it was, as a rule, only the richest and poorest Hobbits that maintained the old custom (page 6).

Of course, that totally makes sense. Like nowadays: the very rich live in huge decadent mansions, and the very poor…live in tiny rat-infested slums. Yeah.

Part Two (yes, this prologue has multiple parts) is about pipe-weed. Because Hobbits smoke pipes. If you’re wondering why, well, here’s a picture of Tolkien: 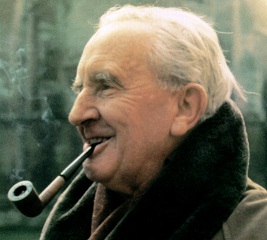 They smoke pipes because he smoked a pipe.

Most of this section is just a quotation from Meriadoc Brandybuck from the book Herblore of the Shire, which, of course, doesn’t actually exist. Want to know a quick and simple way to make your story sound deeper and more layered than it actually is? Include quotations from books or records that don’t actually exist.

The third part is called Of the Ordering of the Shire, and is approximately as interesting as reading the minutes of your local city council meeting. The only part actually worth noting is this:

The Shirriffs was the name that the Hobbits have to their police (page 10).

It’s funny, see, because Shirriff is similar to Sherriff?

The fourth part is the most ridiculously unneeded part of this goddamn prologue. It’s aptly titled “Of the Finding of the Ring” and relates, in excruciating, Tesch-like detail, the section of The Hobbit where Bilbo meets Gollum and gets his magic ring. Now, I can sort of see what Tolkien is trying to do here. This is really the only part of The Hobbit that is actually relevant, and since The Lord of the Rings is all about this piece of jewelry, it kinda makes sense to give that piece of backstory in the prologue, so everyone who hadn’t read The Hobbit would know what the hell was going on, right?

Here’s the problem: all of this is actually going to be related later during the text. You know, where it actually makes sense to put this information? In Chapter Two, all of this story is going to be related between Gandalf and Frodo, in a scene that actually makes sense within the context of the story. Now, I don’t want to give Tolkien too much credit because Chapter Two is a mind-numbingly boring chapter that is nothing but excessive backstory, but at the very least, it makes sense to reveal this at that point. And, if Tolkien had waited, during chapter one, people unfamiliar with the Ring would be surprised by Bilbo’s sudden vanishing. Instead, Tolkien decides to spoil his own story. Smooth.

Towards the end of this section Tolkien mentions that originally, Bilbo wrote a different version of the story, one where Gollum promised to give him a present (the ring which Bilbo had already found), and then when Gollum realized it was lost, Bilbo made him show him the way out of the mines instead. This, of course, is Tolkien’s way of covering his own mistake: the original version of The Hobbit didn’t agree with the subject matter of The Lord of the Rings, and Tolkien, not being a good enough writer to make it work, decided to retcon real life and to re-release The Hobbit with the changes. Being unable to man up and accept the consequences of his inability to plan ahead as a writer, he decided to write it into the story as a bullshit excuse for why the two versions don’t agree with each other.

Tolkien rambles through the rest of the plot of The Hobbit, which I guess is useful if you haven’t read the book, and finally ends on one of the most pretentious bits of this entire book, which is called “Note on the Shire Records”. In it, he relates the history of the various writings of fictional characters. Yes, this is a writer who is pretending that his writings, which of course are “translations” of fictional writings by fictional characters, are within the universe that he has created and are different from other versions of the story. So, instead of writing the story, he’s decided to impress us with his genius. To add to the effect, there’s even a footnote that asks us to look up things in the index. Nice try, John. Not going to happen.

19 Responses to “The Lord of the Rings Spork, Part One”