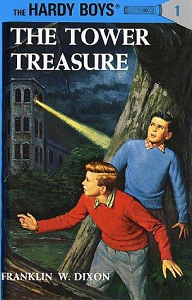 I loved The Hardy Boys. They were one of my favorite series during my formative years and I churned my way through the majority of the series, re-reading my favorites 5-6 times each, which isn’t as impressive as it sounds considering how quickly you can read a Hardy Boys book.

My early writing was strongly influenced by The Hardy Boys, and I made many attempts to write mysteries that involved wildly competent heroes dealing with wildly incompetent international crime lords. It was here that I first began noticing problems with the series, like the fact that they were formulaic as hell. As I would write my own stories, it would come time for my heroes to jet off to some obscure country to follow up on the next clue, and then I was suddenly faced the question: how the hell are they going to pay for this?

I don’t know how the Hardys pay for their plane tickets. Their dad is a retired cop and a private investigator, so I know he isn’t loaded. I also have no idea how the Hardys afford their cars, their motorboat, or their private aeroplane. Or their medical bills, which must be extensive.

Eventually, I began to wonder just how this Franklin W. Dixon guy managed to be such a ridiculously prolific author and discovered the series was actually written by a series of increasingly inadequate ghostwriters. And just like that, my interest evaporated. I felt cheated, manipulated, used. And I haven’t read a single Hardy Boys book since…until now.

From the back cover:

Sons of a famous American detective, the Hardy boys help solve many thrilling cases after school hours and during vacations, as they follow up the clues they unearth in their quest to bring criminals to justice.

Because they have to set a positive example for young impressionable kids, the Hardys can only solve cases after school lets out. Of course, this has no discernable effect on them, since every mystery they take on takes place in the summer or on Christmas break.

If you would like to suggest a Hardy Boys book to be sporked, email me: scavokretlaw@gmail.com

3 Responses to “The Hardy Boys”