The Seven Sleepers Series » Winged Raiders of the Desert 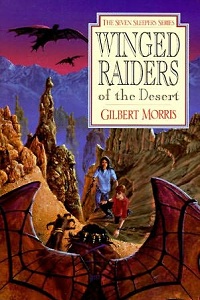 You can buy this piece of shit on Amazon.

During my initial read of Winged, it was so refreshing to be outside of the miserable pestilence that was the previous novel, I almost found myself thinking that this book was good. A few chapters in, I realized, with some horror, that I was actually enjoying an extremely good dynamic going on with one of the characters. It was incredible. Then, of course, about a chapter later, the dynamic completely vanished and we were left with the typical pulp that fills about 130 pages of this 135-page book. Unfortunately, this is actually worse that having a full 135 pages of pulp. The little taste of interesting just shows how good this series could have been, and what a better author could have done if he’d actually given a shit.

Possibly the greatest thing about this book, however, is its back cover:

Evil Lord Necros desires to enlist new soldiers in his army, and he’s chosen the People of the Desert. When they refuse, the Dark Lord makes an alliance with the Winged Ones – men who fly like birds. These men steal from the desert people. Even worse, they capture and enslave them!

I’m guessing this was written by someone who skimmed through a couple of the books, asked Morris what the basic plot was, scribbled the back cover text down on the back of a napkin, tossed it to the printers, and headed off to forget his miserable life in shots of cheap tequila. Because this has at least eight different errors in it. I’d point them out, but there’s really not much of a point. If you like, you can look for them yourself as we go along.

This adventure belongs to Jake. You may recall him – red-haired, angry, and obnoxious. He actually does tolerably well as a leading man and manages to stay away from the bone-headed decisions that Dave, Josh, and Sarah have made. More or less. This would be a step in the right direction, except as a character, Jake is as thin and vapid as a strip of soggy cardboard.

seriously, this series goes on for awhile