The Seven Sleepers Series » Voyage of the Dolphin 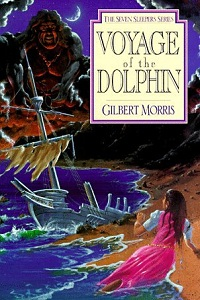 I don’t know why you’d want this book, but if you did you can buy it on Amazon.

Originally, I was under the impression that this book was Sarah’s second adventure. I didn’t remember much from the first time I read it, indicating that it would be thoroughly uninteresting, but that much I thought I remembered. Actually, this is no one’s adventure. Nobody steps up and takes the lead, and nobody does anything. Goel doesn’t make an appearance. I described the fourth tome in this pestilent series as being a whole lot of nothing, but it appears I was sadly mistaken. That title rests firmly upon the shoulders of this volume.

In the rest of the series, except for the first, there’s a stated mission of some kind. Goel wants them to go somewhere and help some people out. Usually they fail, and after Goel fixes everything it’s reasonably evident that things would have been much better off if the Sociopaths never came along. Still, it gives them something to do and an actual reason for going somewhere. Here, there’s no mission. They go along on a voyage, they don’t help or positively impact any of the people they come across, with the possible exception of one, but even that is mostly through the influence of another secondary character.

On the back of the book, at the top, is usually a quotation from the book which is important in some way. For instance, in the last book, the quotation was this: “I’m not going!” Abbey said. “And that’s final.” The summary beneath it went on to describe how Abbey refused to come along with the rest of the Sociopaths. Hilariously, the exact same quotation is used at the top of this book as well, even though it in no way has anything to do with either the summary or the book. The summary itself is uninteresting, except for the final line:

And see if you can figure out why Goel doesn’t rush to their rescue.

You won’t be able to.