The Seven Sleepers Series » The Sword of Camelot 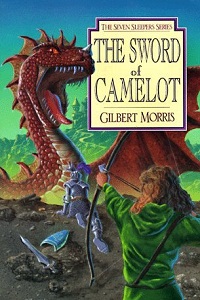 You can buy The Sword of Camelot on Amazon. Please don’t.

Here it is. The book that made me decide to spork this series. And to be perfectly honest (although I’ve blocked most of the later books from my memory) I have the feeling that anything after this book is going to be a letdown. Because really, this book has it all. Nauseatingly stupid plotline? Check. Complete lack of character development? Check. Multiple scenes of plagiarism that would make Christopher Paolini blush? You bet. A plot that is full of fantasy clichés that insult the intelligence? It wouldn’t be Morris without it. Add in a fairly heavy dose of sexist and racist undertones, unintentional homoeroticism, half-bake it, and you get The Sword of Camelot.

This is Reb’s adventure. Although he does more than his fair share of truly idiotic things, compared to Josh and Sarah’s adventures in the first two books, he comes out of this one relatively unscathed.

Okay. He comes out looking worse than he did before. But then again, what did you expect? That’s what passes for character development in Morrisland.

yes there’s another one