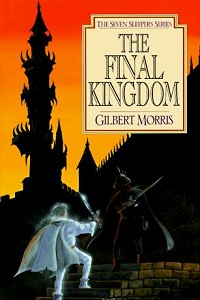 Sadly, you are able to purchase this book on Amazon.

At the end of a ten-book series about the ongoing struggle between good and evil, you’d expect some sort of payoff. Something that ties everything together, that shows you how all the previous books are relevant. A book that takes everything that came before and kicks it up a notch before reveling in the extremely violent battle that lasts for half the book.

You would not expect to spend the first three-quarters of the book on a pointless side quest, one that’s even more pointless than any of the previous novels, with your main characters carrying out the basic function of a messenger pigeon. And the final epic and glorious battle to be quickly summarized in three short chapters at the end of the book.

Then again, this is Morris. You’d think he could write a book without borrowing liberally from The Last Battle

and The Lord of the Rings. But, as will be seen, he can’t.

This is Josh’s adventure. Josh is our main character, he’s the only Sociopath to get a POV scene in every book, he’s the leader of the group, and out of everyone, he’s the most like a real person. This is mostly because he’s the only one that Morris even bothered trying to advance past a stereotype. It would be quite interesting to see this entire book through Josh’s eyes as we look back and see how everyone has progressed throughout the series.

Unfortunately, Josh will spend half of this book MIA.

and we’re done! Morris did write another series but I haven’t sporked it yet.