The Seven Sleepers Series » The Caves That Time Forgot 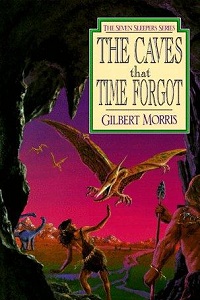 You can buy this terrible, terrible book on Amazon

Before I spork each book, I sit down and read it all the way through, just to get an idea of what I’m in for, what the major themes are (if any), what ideas Morris is trying to get across (and failing) and to get an idea of the book as a whole. It doesn’t take me very long – about half an hour, roughly, as the books aren’t particularly long and don’t require any brain power to simply read.

All in all, I think it’s fairly safe to say that The Caves that Time Forgot can be described as a whole lot of nothing. It’s an extremely bad book, of course, filled with poor writing, plagiarism, inconsistencies, and other things that it just wouldn’t be Morris without. Aside from that, it’s a wholly forgettable and inconsequential little tome.

The book was also published in 1995, meaning it was probably written sometime in 1994 – perhaps, since these books obviously (and as Caves will make abundantly clear) go through no editing process. Which means that in a rather cheap way to cash in on the success of Jurassic Park, this book also has dinosaurs. Yes. Dinosaurs.

This is also Dave’s adventure. Which means that he will be given more chances to screw up, cause problems, and act like an ass than everyone else. So come, let us journey now to the Caves that Logic Forgot.

and yeah, one more