The Seven Sleepers Series » Flight of the Eagles 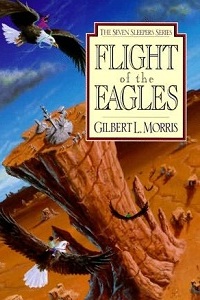 You can buy Flight of the Eagles on Amazon

We open up with a Forward, which quite literally must be seen to be believed.

This is a story about a very ordinary boy named Josh Adams and a very strange adventure he had. Some of you may want to ask “Is it a true story?” I can only say that a true story is not one that has happened but one that could happen. If you are the sort of person who finds “real” people, such as Zachary Taylor, more interesting than Robin Hood, you had better stop here and find a “true” history book. (page 7)

I read this several times and still am not altogether certain of what Morris is trying to say here. There are plenty of stories that could happen and yet are not true, as well as plenty of “true” stories that might not be a completely, 100% accurate depiction of what actually happened. And, considering that it says ‘fiction’ on the back cover and it concerns the ending of this world, I wonder how brain damaged a reader would have to be to ask if it is true.

The next two pages have a large map on them and there’s actually an interesting bit where there are numbers running along the top and the left side. If you have the two key numbers and have a ruler, finding where they intersect will lead you to the desired location. Helpfully, this map has the numbers 1-7, along with an X, pre-printed on it.

There’s also the ‘Mangos River’. Yes. He named it after a fruit. And, printed neatly on the map, is the ‘Ghost Marshes’ and the ‘Murk Wood’. And no, I’m not getting any Tolkien vibes here at all. And yes, I have five paragraphs and we haven’t even started the book proper yet.

4 Responses to “Flight of the Eagles”