The Seven Sleepers Series » Attack of the Amazons » Part Two

The Sociopaths start preparing. Suddenly, Dave, Reb, and Sarah are all expert archers. We’ve never had any mention of this but I bet it will come in handy for later in the book. Then Dave starts arguing with Reb about whether he needs his lariat. Dave says they have to pack light. Why he suddenly cares about these things, I don’t know, especially when Reb will be carrying his own rope. Not to mention that as we all know from Sam Gamgee, you always want to bring some rope. In fact, come to think of it there have been few things more useful this series than Reb’s rope. Reb, of course, wins the argument and brings his rope.

Next, Dave finds that Abbey has packed a bunch of makeup. See, even though Abbey has learned that outside beauty doesn’t matter and it’s what inside that counts, she still has to always look pretty so she brings a makeup kit with her when they’re going to be hiking into the middle of a jungle. Somehow, this makes sense. They argue for a bit, Abbey reiterates that women can do better than men if they have the chance (foreshadowing!), and finally Josh tells Dave to shut up and let Abbey carry whatever she wants.

The first part of their journey is aboard a ship with Abercrombie and Bitch. Considering the utter uselessness of the preceding novel, it wouldn’t surprise me to learn that Morris started writing this book, created Abercrombie and Bitch, and realized that he should write a backstory involving them and make himself a few more bucks.

In the previous book, there was much mention of how much Reb hated the water and how experienced a sailor Token had become and how much he enjoyed sailing, even though this flatly contradicted earlier books. Now this has changed again – Token promptly gets seasick for the first two days and Reb has to take care of him.

Once Token is well, he stands on the deck watching the whales cavort with each other. Abercrombie explains to him that whales aren’t fish, much to Token’s surprise. I imagine most 14-year-olds are unaware of this fact.

That night at dinner they talk about what they’re going to eat when they’re in the jungle. Jake suggests monkeys. Abercrombie says that they aren’t bad, and Bitch tells him that he’s never eaten monkey. Au contraire. They participated in a feast at the end of Voyage of the Dolphin and ate roasted monkey meat. What do we call this? We call this Lazy-Ass Author Syndrome.

Later, Abbey and Dave argue some more. It’s still not that interesting. However, Josh and Sarah are eavesdropping on them, and they use the opportunity to exposit to the readers that they’ve always been friends, even back on Oldworld. Which is patently untrue, and even after they reached Nuworld the first thing Josh did was throw Sarah off a building. But anyway. They share a Moment. Then Sarah gets annoyed that Josh isn’t “romantic” enough and storms off. Ah, teenage angst.

Once they’ve run out of ocean the Sociopaths disembark and bid a fond farewell to Abercrombie and Bitch. Abercrombie gives them some clunky exposition, phrased as advice, and asks if they have their machetes. Reb says yes, and Morris refers to it as a knife. Sorry, but a machete is not a knife.

They take off. Josh angsts about how he’s not a good leader and Sarah encourages him. It’s the exact same scene we’ve had in every book, and it’s not interesting.

Later, Abbey complains about how heavy her knapsack is, and Dave uses the opportunity to make fun of her for bring makeup. In a bit, they stop at a river. Reb and Token start fishing. We learn that Jake comes from New York, effectively proving that Morris has no idea how the geography in Nuworld works.

While they eat dinner, Reb entertains everyone with tall tales. He does, in fact, tell a pretty hilarious story about his dog named Old Blue. His family owned three cows, and every day Blue would go out and bring them in. One day they sold a cow. That night he sent Blue out as usual, and the dog couldn’t understand why there wasn’t a third cow – until they showed him the check that they got for the cow.

The next morning they have a breakfast of bacon. I know I always bring bacon along on my trips into the jungle. Then they walk for half of the day before stopping at a stream. Sarah and Abbey go upstream to take a bath. Afterwards, they dress, and suddenly a bull elephant emerges from the underbrush and charges them. Just like that. Unprovoked. They run off, screaming for Josh. Josh grabs his shirt and waves it and yells. This confuses the elephant, so the rest of the guys grab their shirts and wave them and yell. The elephant gives them a funny look. They all stop. After a moment, the elephant turns and walks away. Sounds like typical elephant behavior to me.

The next day they keep walking. Token doesn’t know the difference between “ambidextrous” and “amphibious”, which gives me great hopes for the future of Nuworld. As a side note, I find it interesting that Token is (by far) the dumbest of the Sociopaths. Yes, he is the youngest, but only by a year. And while they all do extremely stupid things, Token doesn’t even know the most basic of things. I would guess that this is Morris assuming that Token, because he’s black, isn’t very smart and doesn’t do well in school. Ah, racism.

They see smoke ahead, and find themselves at a village. Josh introduces them as being from Goel. The villagers are cheered by that, because they’re followers of Goel as well. There’s a big feast and afterwards Josh gets up and asks if they’ll guide them to the land of Fedor. Everyone freaks out because Fedor is a bad place, filled with bad people, who kidnap them and use them as slaves. Ominous. The chief refuses to help them, so the next day they head out on their own.

Chapter Five – Sleepers to the Rescue

The title makes me laugh. And gag a little, at the same time. I wouldn’t trust the Sociopaths to fetch me a shopping cart, let alone rescue an actual person.

Josh mentions that he doesn’t like just walking blindly through the jungle without knowing what’s coming up. Which, since he’s been doing basically that for eight books now, shouldn’t really bother him. But Reb says that he should go out and be a vedette. Sarah asks what that is. Reb explains that it’s a military term used in the Civil War. A vedette is the same thing as a scout on horseback. I looked it up. Actually, a vedette is a mounted sentry or outpost. A vedette stands in one place on the edge of the army and keeps an eye out for anyone approaching, while a scout actually goes ahead of the moving army and scouts. So Morris has it more or less completely wrong. Go figure.

Reb takes off. The Sociopaths keep walking. Suddenly Reb appears running back towards them, looking serious. He gasps for breath, and then explains that up ahead, a bunch of natives have a captive tied to a post. The captive is a chick, with white skin and red hair. The natives are getting ready to burn her alive.

The Sociopaths quickly decide that they can’t let the natives kill her. They whip out their bows and Reb leads them silently up to the area. I find it slightly hard to believe that a bunch of uncoordinated teenagers with no experience can navigate the jungle well enough to sneak up on a bunch of natives.

Reb asks Josh if they shoot to kill. He has a moment of indecision, because he’s a good person, and, y’know, hates death and all that. Josh says they’ll try to scare them off first and then kill for self-defense, if they have to. I think shooting arrows from the jungle at a bunch of natives and then killing them if they fight back doesn’t really sound much like self-defense.

They sneak up on both sides of a valley where this ritual witch-burning is taking place. Morris describes the chick:

She appeared to be in her late teens, and he noticed that she was very attractive.

Oddly, this is the exact description that every young woman the Sociopaths meet gets. They’re instantly summed up on whether they’re pretty or not. They’re always instantly objectified. 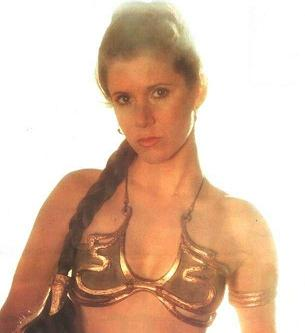 An image no family-friendly Christian novel is complete without.

She was wearing a skirt made out of some kind of animal hide, and a gold metallic halter protected her upper body.

…she’s wearing a Princess Leia gold metal bikini. And she’s tied to a pole. I think I’ve discovered yet another of Morris’ fetishes.

…altogether she made a pathetic picture as she stood there at the mercy of the savages (page 54).

Savages. That’s what the rest of the natives are. Morris describes them as having hideous tattoos. They’re ugly, which means they’re bad. And they’re definitely not worthy of saving or, perhaps, explaining Goel’s love to. But the white girl is worth saving, because she’s attractive. And white. Maybe she’s a convicted murderer being executed after a trial with a jury of her peers and legal representation. The Sociopaths have no idea. They’re just going to attack these people.

So they do. Dave sets off his rape alarm and the Sociopaths shoot a bunch of arrows over the natives’ heads. And by “a bunch”, I mean “seven”. And the natives turn and run away. Yes. 45 to 50 hardcore, heavily tattooed warriors, carrying spears and knives, turn and run like rabbits into the jungle because of a loud noise and seven arrows being shot over their heads.

Her name is Merle. The “savages” were a neighboring tribe that captured her while she was out hunting. Dave tells her they come in peace. Merle asks him if all the men are as tall as him in his country. Dave is surprised and says of course they are. Merle looks at Abbey’s face, which is slathered in makeup. Since they’re in a jungle, it should also be running down her face in streaks and look absolutely horrible. She then asks Sarah if she’s in charge. Sarah is surprised and says that no, Josh is. Merle is then very surprised. File this one under “obvious foreshadowing”. But Merle agrees to take them to her village, and they all traipse off through the jungle.