In 2005, Stanek posted an article on his website about Brian Jacques. During the course of the article, Stanek was careful to never explicitly state that he and Brian Jacques were on tour together, however, things were phrased in such a way to indicate that they were at the signing together, instead of Stanek merely traveling to the book-signing event and posing for a picture as a fan. Later, Stanek amended his captions, although he still left in the phrase “Brian Jacques and Robert Stanek at a recent book signing”, which has implications well beyond an innocent caption such as “Robert Stanek at a recent Brian Jacques book signing”.

Critics quickly pointed out that if one looked underneath the table, it was rather difficult to see Stanek’s legs. This led to a number of blog posts claiming that Stanek had photoshopped himself into a picture with Brian Jacques but had forgotten (or did not have the skill) to photoshop his legs in as well. The now-defunct CrapAuthors.com claimed to have contacted Stanek’s webmaster to verify if Stanek and Jacques had ever gone on tour together. Jacques’ webmaster allegedly said that they had never heard of him. I attempted to contact Jacques or his webmaster through Jacques’ website to confirm this, however, I have not received a response. Since Jacques has now experienced Author Existence Failure, I doubt I will ever be able to get his opinion on the matter. 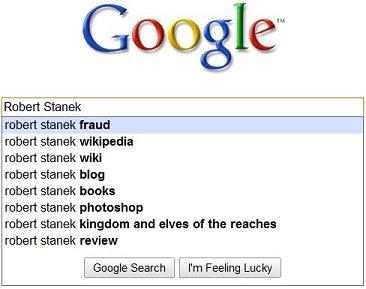 Fortunately, I don’t need it.

The allegations of photoshopping did not stop, to the point that for some time one of Google’s recommended searches for when you typed in “Robert Stanek” was “Robert Stanek photoshop”. Eventually, in late 2009, Stanek decided to respond to the incident on his blog. He could have just deleted the entire page and tried to pretend it never happened, which would have been difficult, considering how many people around the internet had copies of the picture. A better, more even-keel approach would have been to post the picture, admit that he had just met Brian Jacques at a book signing, claim that he had never said anything to the contrary (which he probably could have gotten away with), and say that the reason why the picture looks like crap was because it was taken with a crappy camera.

Stanek, however, does not always make the best decisions, and instead he decided to post several high-resolution photographs of the event to prove that he was actually there. Unfortunately for him, this also conclusively proved that he had photoshopped the original picture.

He also could not leave well enough alone and admit that he had been there as a fan rather than as an author. And so he came up with a new explanation to make himself sound more important than he actually is: by implicating that the only reason Brian Jacques was even there in the first place was to meet his good friend Robert Stanek!

No, it wasn’t a coincidence. Olympia, WA is a large city with a lot of people who like Brian Jacques.

Take a look at these two photographs below. They are not the same picture because Robert Stanek did not post a high-resolution copy of the original picture that all the fuss was about – ostensibly, because doing so would prove he’d photoshopped the photo. However, it seems obvious that these two pictures were taken only a few moments apart. In the left picture (which is real) Jacques is signing a book, and in the right picture (doctored) Jacques is then passing it to the woman on his right. Note that the girl on the far right of the image has her hands and her hair in a very similar position in both images, along with several wrinkles in the sweatpants of her right leg that are virtually identical. These pictures were taken in very short succession.

I have circled the trash in front of Stanek as its absence is crucial to any claims of photoshopping. As we have established, these two photographs were taken very close to each other. Why would someone swoop in, gather up most (but not all) of the trash, remove it from the shot, place an extra book on the very edge of the table that was not there before, and then take another picture? Why would any rational person do that? More importantly, if Stanek is telling the truth, why did he not post a high-resolution copy of the original photograph? Why did he post two different pictures to prove that the original was genuine? I think the reasonable application of a little logic to this situation points very strongly to some photoshopping going on. But as nice as logic is, we still have the question: did Stanek really photoshop the picture?

The answer is yes, and I’ll be happy to prove it.

(I apologize for the blurriness of some of these photographs, as I was forced to blow up the original picture, which has led to some (but not all) of the heavy pixelization you’ll see.)

Notice the color of the edge of the table on the left of the picture. It’s very dark directly in front of Brian Jacques. It’s also dark immediately to the right of his arm, and then it suddenly gets extremely light in front of Robert Stanek. If you look at the snippet of the right from the high-resolution unaltered photograph, you can see that this sudden change in shade directly corresponds to our mysteriously disappearing trash. The table goes from being light tan to very dark to very light. Why is there such a drastic change in colors in just a few inches of actual space?

First, compare the table directly below the book in both pictures. You can see that it’s slightly whiter, which is caused by the light striking the white pages of the book and then reflecting off the table itself. This is the same in both pictures. You will also notice a similar reflection in the left picture directly beneath the coffee cup. In the right picture, the reflection is still there, but there is no coffee cup. What is causing this reflection?

Look at Stanek’s shirt, directly above the table. There are three horizontal lines running through the blue there, along with unnatural pixelization above it that was not caused by the image being blown up.

Stanek is squatting behind the table, most likely with his wrists on the very edge and most of his arms hidden behind the table. Take a look at these three images. The left image is the unedited image, the center is the photoshopped image, and the one on the right is my roommate’s hands, mimicking Stanek’s pose. In all three images you can see the wrist on the left hand sloping down towards the edge of the table. The right wrist should be sloping down to the left of the image. In the real photo, his wrist is hidden by the coffee cup. In the photoshopped photo, his wrist is nonexistent. His hand just appears out of the blue pit that is his sweater and is not actually attached to anything.

I believe the logical conclusion to all this is obvious. Stanek wanted the photograph to appear as if he and Jacques were on a book tour together, and the trash in front of him was prohibitive to that end. If two authors were signing books together at an event, one of them would not have a pile of trash in front of him in the space he needs for signing books. So Stanek photoshopped the trash out of the frame and added in the extra book on the right to make it appear they were at a joint signing. During the course of the photoshopping, the underside of the table grew blurred, creating the illusion that Stanek’s legs were not there, which led to the initial accusations of photoshopping. And the rest, as they say, is history.

That being said, I am not afraid to admit when I am wrong. All Stanek needs to do is post a copy of the original photograph in high resolution and prove that it is genuine and not only will I immediately take this the article down, I will issue him a public apology.

In the same location on his website, Stanek had an article about himself and RA Salvatore. Like the Jacques article, Stanek is careful to steer clear of making any actual claims, but the article is written in such a way to make it appear than it was more than it actually was. Like the article title – “Close-up with Robert Stanek & RA Salvatore”, or the quote, “The two Roberts […] met at a book event”. Again, this was obviously just another case of Stanek going to a signing as a fan and posing for a picture with a real author. Which you could pretty much tell from the picture that Stanek posted himself: 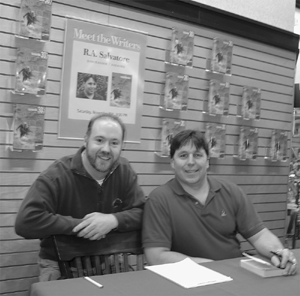 Notice the sign on the wall behind them…it only lists RA Salvatore’s name.

And, of course, if two authors are at a book event together, both in their professional capacity as authors…they both get chairs.

But, Stanek decided to complicate things with his series of rage-filled blog posts:

This would never do. So I wrote RA Salvatore and asked him. He he wrote me back, and we exchanged several emails. He was extremely polite and friendly, for which I have the utmost respect for him. This was part of his response:

no, I’m not familiar with Mr. Stanek on any personal level, or familiar at all with his works.  I note that he called me “Rob,” and no one ever calls me “Rob.”

The first part did not surprise me, but the second part did. Salvatore goes by Bob. It’s how he signed his emails to me. Stanek cannot even get his name correct.