Robert Stanek has never been shy about responding to his critics, although he tends to do so from behind a sockpuppet account. There are several notable exceptions, which I will get to in a moment.

It is possible, I suppose, that the many, many responses to criticism are from Stanek’s outraged fans and can not be blamed on Stanek. There’s just one problem: Stanek, as far as I can tell, does not have any fans. More importantly, knowing that Stanek writes from behind sockpuppet accounts and knowing that Stanek responds viciously to his critics, there is no reason for me to think that Stanek isn’t behind the many sockpuppet flames of his criticism.

A perfect example of this is the Jeff Darcy situation: He wrote a negative review of Keeper Martin’s Tale and posted it on his blog, where he also speculated that Stanek was writing his own reviews. About a month later, someone going by the name of Jake showed up and posted a flame on the blog:

Conversation about Robert Stanek continued in the blog comments for several years, until someone pointed out that a member of the only Robert Stanek messageboard on the internet had made some rather serious allegations about Darcy, as well as posting his personal contact information:

I contacted Jeff Darcy personally to get his side of the story. The person posting on Stanek’s messageboard had said that Darcy was a child abuser and posted his home address. After Darcy contacted ProBoards, the posts were removed, but they showed up later on Squidoo and were not removed until Darcy contacted Seth Godin.

Darcy also had this to say (quoted with permission):

If I were an author, part of my motivation would be the thought of bringing some good to the world.  If I were aware, as Stanek most assuredly is, that people were doing such spiteful and dishonest things in my supposed defense, I would openly and forcefully condemn them.  Stanek does no such thing.  In fact, he actively encourages them by playing up the persecution complex every chance he gets . . . and this is all assuming that the “fans” aren’t Stanek himself, which I seriously doubt.  No matter how you interpret what’s going on, Stanek is not only a truly awful author who fraudulently re-publishes the same material in different covers and who spams Amazon reviews, but he’s an immoral sack of shit in even worse ways as well.

I can only agree.

Although there are many more examples I could cite, I will restrict most of my analysis to Stanek’s blog, since this is is the one place that we know, beyond the shadow of a doubt, contains the opinions of Stanek. Personally, I do not have any doubts whatsoever about the other sockpuppets around the internet, but I am aware you may not feel the same way.

The first blog post I am screencapping here is from May 2007:

Intellectually, I understand why Stanek claims that a small hate group is out to destroy his reputation and ruin interest in his books. He doesn’t have any other option to explain why a surprisingly large number of people claim he’s a fraud and that all his reviews are fake.

However, his claims just don’t hold water. Controversy, on average, tends to raise sales rather than lower them because more people hear about someone’s work and end up buying a copy to either see what all the fuss is about or to enjoy a good laugh at the book’s expense. Take Christopher Paolini. There are hundreds of extremely negative reviews of his books on the internet. Paolini even boasts an online community, Anti-Shurtugal, that was specifically devoted to ripping apart his books and, in many cases, poking fun or openly mocking him. The end result on Paolini’s sales? His latest book, Brisingr, sold 500,000 copies with the first 24 hours after it was published.

Or take Twilight. It’s become fashionable to bash Twilight. There are many, many online websites devoted to trashing Stephenie Meyer and Twilight. Even Stephen King called her a poor writer. The result? Twilight has sold millions of books and the movies have made hundreds of millions of dollars.

The difference? Both Paolini and Meyer have real fans. Ultimately, 95% of fans don’t really care if people hate the book or trash it online. People tend not to care about other people’s opinions. And if Stanek was a legitimate author, with real fans, the overall effect of this so-called group of ‘haters’ would be negligible.

But Stanek doesn’t have fans. His entire business model revolves around having such overwhelmingly positive reviews that people are tricked into buying his books. Any sniff of fraud or allegations of misconduct would look very bad. And so he had to come out on the offensive.

Which he did. Notice that he refers to this as ‘hate crimes’, which is a ridiculous exaggeration. Even if Stanek was legitimate and he did have a group of haters trying to ruin him, it would be lies, not hate crimes.

It’s interesting to see that at this point on his blog, Stanek was still being fairly civil.

First, it’s Meyer, not Meyers. I started Googling to try and find out just what these two authors did.

Patricia Briggs’ husband Mike (who runs her blog) had the audacity to link to an article that claimed Stanek’s methods of self-promotion were unethical. That’s all.

I have no idea what Stephenie Meyer did or what Robert Stanek thinks she may have done. I have Googled it to no avail.

We move forward to October 2009, where Stanek attempted to defend himself from the photoshop allegations.

I don’t know what I ever did to warrant such negative attention but it does bring things that have happened to me and to my family into focus. Why anyone would make up such nonsense about me, I don’t know. Why people would believe such nonsense, is even harder to fathom.

Here’s the thing: generally speaking, people don’t just “make up nonsense” unless they have a very specific agenda or an axe to grind. People who dislike authors have neither.

Thousands, if not millions of people despise the Twilight series. They don’t make up lies about Stephenie Meyer to try and get their point across. They talk about the books themselves, using specific examples from the text, along with their own opinions, to explain why they think Twilight sucks.

The same thing is done by people who hate Christopher Paolini’s writing. And so on and so forth for nearly every author ever published. And, by and large, none of their critics stoop to making things up because they don’t need to. They have enough to complain about without needing to make things up.

In case you’re wondering who keeps making up this nonsense designed to damage my reputation: friends/fans of several specific authors. Those particular authors have also been participants in this nonsense to boost their own careers while damaging mine. If they sleep well at night after what they’ve done, they have no heart, soul or conscience.

I really do not understand Stanek’s logic here. Trashing one author does not help another author. The two actions are completely unrelated. Not to mention, Martin is a New York Times bestselling author (see what I just did there with that link?) whose series was just adapted into an HBO television series. He doesn’t need his reputation pumped up, he already is a well-established and very wealthy author who probably has never even heard of Robert Stanek.

More importantly, Stanek’s critics aren’t necessarily huge George RR Martin fans. While there have been several threads on a Martin forum, there have been many other discussion threads on forums and blog posts completely unrelated to Martin.

I am also not sure what Stanek is arguing when he says that his books are enduring smear campaigns because they’re good and beloved. Newsflash: that does not make any sense. Good books don’t endure smear campaigns. The only books that have smear campaigns are books with extremely controversial content, and Stanek’s content is about as vanilla as it comes.

Finally, I’m not aware of anyone who has invested a huge amount of time and money into ruining Stanek’s reputation, except for possibly myself. And while I have invested a fair amount of time into this, I bought Stanek’s books used, generally for less than a $1 apiece. Also, I didn’t get into this to try and ruin anyone’s reputation, I came into this to find the truth because I thought it was a fascinating story.

Then, Stanek said this [Note: A few weeks after this blog post was posted, Stanek edited it and deleted the final sentence]:

Several readers have told me about discussions of my books on Pat’s list, wert, and best f books. Generally, there’s no point in responding to such nonsense, and I never have. There’s not much point. I will say this, however. The people at the sites are likely the same ones who thought it was funny to stalk and harass readers of my books who voiced opinions online. They knew most of my readers are children, and also knew most of the readers they stalked and harassed online were children. They did not care. They did it because they think they can do or say anything online without repercussions. Well, someone someday will give them what they deserve, I’m certain. In prison, people like them usually get shanked.

I find it hilarious that Stanek is pretending to be angry about his child readers being harassed yet writes on his blog that if his critics were in prison, they would get shanked.

More importantly, Stanek’s critics have never stalked or harassed his readers (not that he has readers). The most I have ever seen was people accusing Stanek’s sockpuppets of being Stanek himself, and, generally speaking, being remarkably polite about it. For a perfect example, take this recent Twitter exchange between Stanek and a critic, which I have arranged in approximate chronological order: 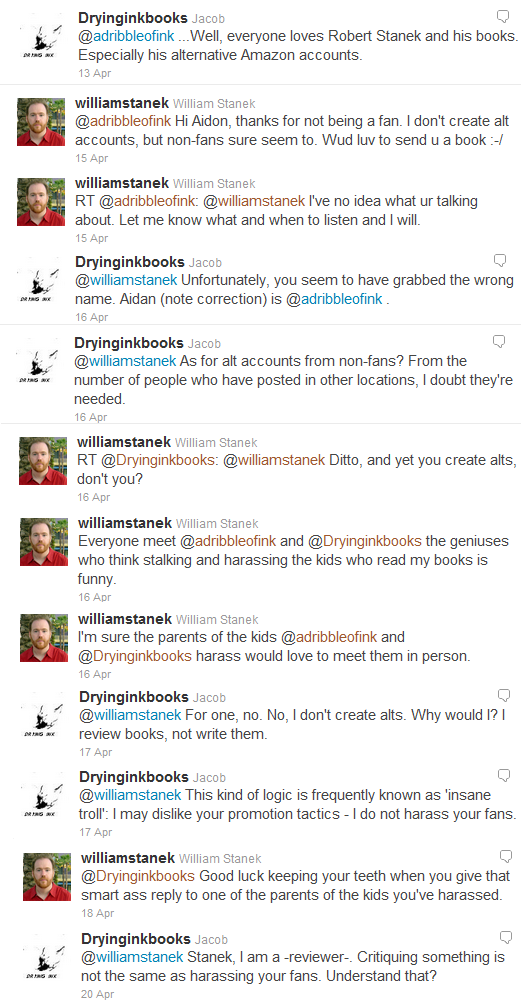 So, Stanek randomly decides to accuse someone of stalking and harassing children for posting a sarcastic tweet. Then, after a few remarkably civil replies, he decides to make a crack about the critic getting his teeth knocked out.

Clearly, Stanek is all class.

He’s also been known to impersonate a lawyer.

In May of 2002, David Langford, author and editor of the science fiction fanzine and newsletter Ansible, posted a short piece about Robert Stanek:

Naturally, neither of these comments sat particularly well with Stanek – or, I’m sure, his billions of followers. And so, a mere three years later, after someone evidently Googled Robert Stanek’s name one time too many, an individual sent a threatening email, signed by a lawyer, to the Glasgow University authorities (Glasglow University, at the time, was hosting the online archives of Ansible). Glasglow promptly removed more than twelve years of Ansible archives, as detailed by Langford here.

Curious, I emailed Langford, requesting a copy of the email in question. He promptly replied, and was kind enough to forward me a copy of the correspondence with Glasgow University, as well as the initial email: 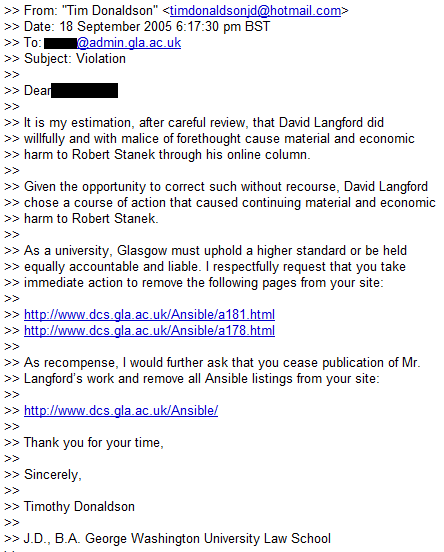 Now, I’m not a legal expert, but I’m pretty sure that it’s illegal to pretend to be a lawyer. And I do know, without any real doubt, that it is definitely illegal to pretend to be a lawyer who actually exists. A quick Googling of Timothy Donaldson reveals there is a lawyer of that name with law offices in Bellevue, Washington. It’s almost as if someone who lives in the Seattle area used a name that, if it was Googled, would appear legitimate enough to frighten whoever received the email. An action that would open them up to being sued by the real Timothy Donaldson.

But no one would be that stupid, right?

Part Seven: An Army of Sockpuppets

15 Responses to “Part Six: Stanek Responds To His Critics”