Note: hat-tip to a brilliant reader who brought the below to my attention.

It is a truth universally acknowledged that authors, having written and published a book, desire laudatory reviews from other authors to grace the description and back cover and help convince a reader to buy the book. Now, it’s true that many blurb reviews of this type are a professional courtesy: the author providing the quote may not have read the book in question at all, but this is standard practice. The flip side is that if an author frequently recommends books that are absolute dogshit, he risks alienating his own fanbase, so authors don’t just hand these out to anyone who asks.

Needless to say, if you’re self-published, don’t know any other authors, and are a generally terrible writer and/or Not a Very Nice Person, it’s going to be really hard to get those recommendations, which we’ve detailed before at great length. So what are you going to do?

One unethical method (if you didn’t mind opening yourself up to legal risk, and had absolutely no shame) would be to create a fake author with the same name as a famous author – say, Stephen King – and then use that fake author to give yourself a recommendation.

Obviously, that’s not going to work, for really famous authors – Stephen King, JK Rowling, George RR Martin – these guys are generally trademarked, and trying to pull that shit will get you sued, and for good reason. Even if you really wrote a book and your name happens to be Stephen King, you’re not going to get published under that name, you’ll need to distinguish yourself by publishing as Stephen L. King or something along those lines.

But what if you didn’t target the super-famous authors, but a bit lower, maybe authors who don’t have the pockets and publishing companies who would want to pursue expensive litigation, and who might not even notice unless someone brought it to their attention, but if a casual reader saw the name and popped it into Google and Amazon, the first result would be a popular author and they’d go “Huh, sounds legit!” and maybe go and buy your book.

But no one would do something like that, right?

Which brings us back, once more, to our dear friend Robert Stanek. He published a series in 2014 called This Mortal Coil. And if you take a look at the Editorial Reviews section – which Stanek controls, since he’s self-published, he now has eight glowing reviews from eight…uh, authors? 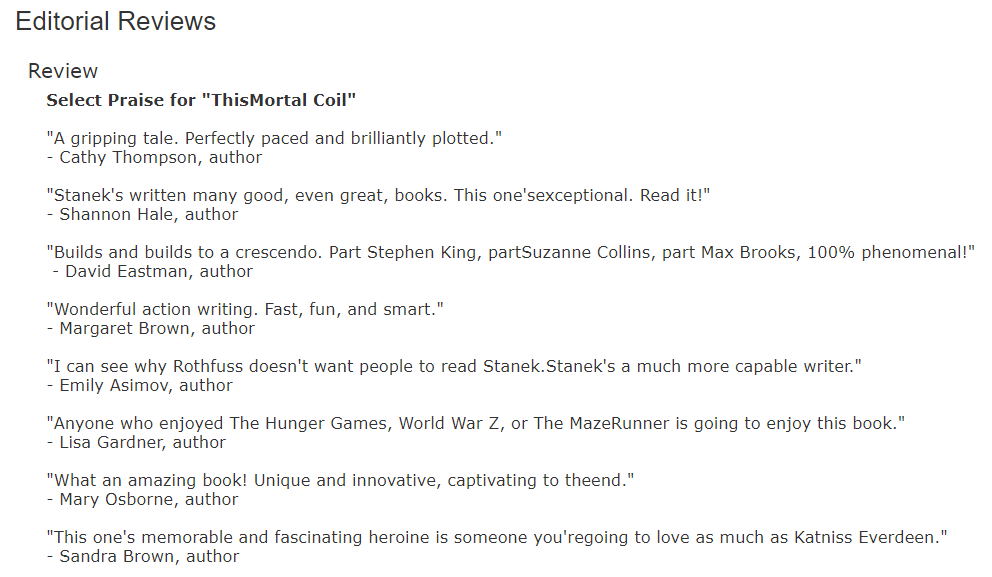 Readers will note the hallmarks of fake Stanek reviews:

But let’s analyze. Start with Sandra Brown. When you plug her name into Amazon, you get Sandra Brown. I’ve never heard of her, but apparently she’s written 60 New York Times bestsellers. That’s pretty good! And she’s giving glowing reviews to Robert Stanek!

Although. There’s another Sandra Brown, whose page doesn’t have an author photo. Who has written four children’s Kindle ebooks. One of which, if you use the “Look Inside” feature, is literally just pictures of animals for every letter of the alphabet. The publisher is listed as My World Books, but if you check the product details, you can see it’s sold by Amazon Digital Services LLC. Meaning, this was self-published via Kindle Direct Publishing. Might be affiliated with a legit publishing company, might not be.

But if we click the publisher’s name on Amazon, we can see other books affiliated with that publishing company. And wouldn’t you know, there’s ALSO a book by Shannon Hale, who doesn’t have an author photo. Who was also on that list of “authors” giving Stanek glowing praise. Who has written five childrens’ Kindle ebooks. Including a low-quality book about baby animals that is literally just roughly photoshopped words over public domain images. If we plug the name “Shannon Hale” into Amazon, what do we get? You guessed! A NYT bestselling author!

I could go on, but let me just break it down in this handy little table:

Let’s recap. Stanek writes and publishes This Mortal Coil, and in his Editorial reviews, he includes praise from eight separate authors:

Emily Asimov, who is published via Stanek’s Reagent Press (and is almost certainly a Stanek pseudonym) also has reviews from Margaret Brown and Mary Osborne listed. And from Shannon Hale and Lisa Gardner.

Or consider Jennifer Blake, who wrote Baby Animals on Safari , is published by Reagent Press, shares a name with a bestselling author, and who also “wrote” the hilarious “A Tribute To William Robert Stanek, an American Author Who Should Be on Everyone’s Must Read List” – on Robert Stanek’s fucking blog.

In a way, though, it’s actually kinda brilliant. Why bother creating sockpuppet fan accounts when you can create sockpuppet authors. It works on multiple levels:

I mean, “plausible deniability” is kind of a stretch, but you get what I mean.

Fun fact: Washington State, where Stanek lives, has a law against criminal impersonation if someone “assumes a false identity” with “intent to defraud”. It’s a class C felony which can land you up to five years in prison and $10,000 in fines, and as we know from Robert Stanek, prison is where you get shanked.

Good luck, Robert! You might need it! And don’t bother deleting anything, I have copies of it all.