Robert Stanek » Part Four: One Book For the Price of Many

“The Ruin Mist Tales are an alternate history for best-selling author Robert Stanek’s Keeper Martin’s Tales. For every fantastic story you’ll ever find, there are often other stories that retell the adventures from different points of view – so why should it be any different in Ruin Mist?”

“…there are two sides to every story. Our version of a story may be different from yours, even if we’re witnessing the same events. Now, if we’re talking about history, the stories from opposing societies and peoples are often very different. The contrast may be as different as night and day.”

– Robert Stanek, on how to deceive your readers into buying two copies of the same book.

Some authors choose to re-tell a story from a different point of view. This is frequently done within books for dramatic effect: we first see the scene, learn some information, and then a chapter later the author goes back and tells the scene again through someone else’s eyes. Depending on what the author wants, we could then realize our first assumptions were wholly inaccurate and a product of our viewpoint, or we could merely gain some deeper appreciation and insight into what’s happening. Or, if the author isn’t particularly talented, we learn nothing new and are irritated that the story keeps repeating itself.

Usually, though, authors don’t write entirely new books with the new point of view, but even that is not necessarily a bad thing. Probably the most well-known example is Ender’s Game and Ender’s Shadow. Both stories follow more or less the exact same storyline, but reading Shadow after Game was still enjoyable, despite the fact that the entirety of Ender’s Game is building towards a massive twist at the end, a twist that the reader knows is coming while reading Ender’s Shadow. Orson Scott Card took a story that his readers knew backwards and forwards and still managed to write a parallel book that was gripping, compelling, and surprising.

But writing books is hard work. And when your entire M.O. is to trick people into buying your books, why not repackage your story with new covers and titles and pretend it’s an entirely new series? And then do it again? And again? 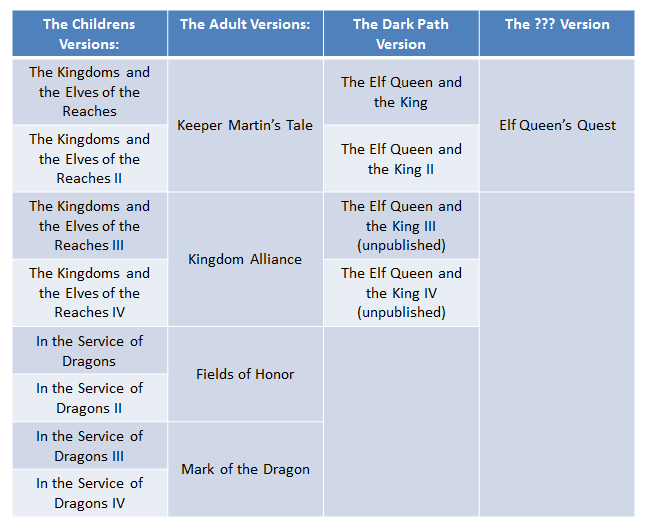 The books on the same horizontal section are the exact same story.

Stanek has written a single fantasy series that was four books, Keeper Martin’s Tale through Mark of the Dragon, which he markets as the “adult” version of his story. He then split each of these four books in half and released them as the “children’s version”, with The Kingdoms and the Elves of the Reaches I-IV and In the Service of Dragons I-IV. These series are exactly, word for word, identical.

Now, doing this just strikes me as being ridiculously greedy. And it would be bad enough…if Stanek were actually honest about what he was doing. He isn’t. I have found two references, on his personal website, that talk about the ‘dark path’ version of his stories, which I’ll get to in a moment, and a few references, also on his personal sites, that mention the difference between the “children’s” and the “adult” series. If Stanek is an honest, moral person, why would he re-release the series under a completely different name and not make it clear that they were the same series? I didn’t realize this until after I’d spent hours researching Stanek extensively. Nowhere on Amazon (except for in a few negative reviews), or on the book’s covers, does it state that these are the same story. It’s almost as if Stanek is hoping that people will accidentally buy books from both series, assuming they’re completely different stories…

…which, incidentally, has happened. I’ve read reviews from people who were very pissed off to have been cheated out of their money this way.

Incidentally…if you’re not convinced that Stanek writes his own reviews, take a look at these two on Amazon. If this Maureen Newbower is actually a real person, and has actually read and enjoyed Stanek’s books….why would she write two glowing five-star reviews…of the exact same book? Hell, even if she didn’t care that Stanek did this, you’d think she’d at least note that they’re the exact same book. Or at least she wouldn’t copy and paste her own review. Or lie about Publishers Weekly…

More importantly, it’s not a retelling of the same story. I would suspect that it’s an older draft of the same story, except I don’t think that Stanek ever wrote more than a single draft. However, the stories are functionally identical, with several small differences:

And, if that wasn’t enough, Stanek decided to split the Dark Path in half and release them as two separate books….again. Elf Queen’s Quest is identical to The Elf Queen and the King I & II. And again…neither of these books say that is what was done to them.

For some reason, Stanek never bothered to finish putting out the Dark Path. Although The Elf Queen and the King III & IV were announced, and are actually listed in the “Other Books By Robert Stanek” pages of several other books, they were never published.

If you have any doubts, I would recommend using Amazon’s very helpful “Look Inside” feature. Check out The Kingdoms and the Elves of the Reaches, and Keeper Martin’s Tale. Read the first few pages. And, for your convenience, I have some screenshots and scans: 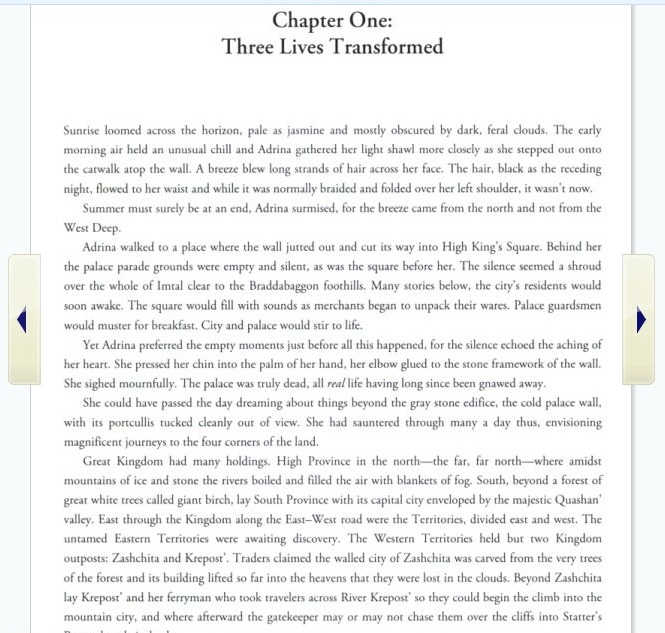 This is the first page of “Keeper Martin’s Tale”.

And now, compare it to this page: 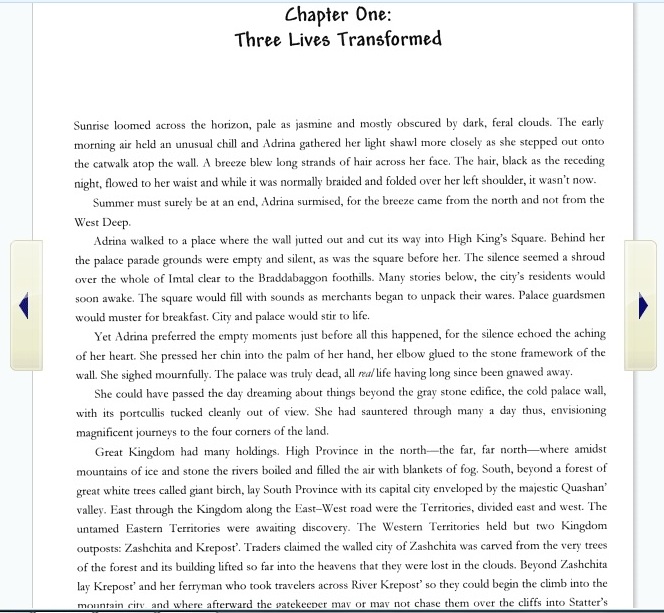 This is the first page of “The Kingdoms and the Elves of the Reaches”.

Let’s now move on to the Dark Path. The image on the left is from The Kingdoms and the Elves of the Reaches, the ones on the right is from The Elf Queen and the King. I have highlighted the similarities.

As you can see these are very similar, and identical in places. You can also see the rearrangement – the scene in The Elf Queen and the King with Midori is a scene that took place much later in the book in certain editions of The Kingdoms and the Elves of the Reaches.

There are also crass stupidities that are played upon the reader in The Elf Queen and the King. For example, the executioner beginning his day’s work? Just how many criminals do they have in this city? And, I note, in this version of the story Imtal is apparently under siege by the bandit kings…which makes me wonder just how the heroes walk out of the city later in the story, completely unmolested.

But I’m getting off-topic.

10 Responses to “Part Four: One Book For the Price of Many”