In early 2006, a series of articles (about twenty-five, actually) were created on Wikipedia. An edit war ensued between the pro-Stanek users (who, I suspect, were all actually Stanek himself, although at the time it was assumed they were a group of rabid Stanek fans. However, as we know, Stanek doesn’t really have any fans) and the regular Wikipedia editors. You can read a good recap of the incident on this LiveJournal post.

After they were deleted, someone re-posted them onto Squidoo, with a note at the beginning:

Setting aside the fact that Wikipedia is not a place for people to create “tributes” to you, it was not deleted by author bashers or because it was threatening. It was deleted because it wasn’t notable:

There was even a warning posted on the administrator’s page about it, titled, appropriately enough, “Beware the Stanek”.

The most ridiculous, I think, were the insertions of Stanek’s work onto completely unrelated pages…such as the page for literacy:

Interestingly enough, Stanek has a reproduction of the page on his personal website, with this note:

It’s rather odd how both Stanek’s page and the Squidoo page uses the exact same phrase “so threatening to certain persons”. It’s almost as if they were written by the exact same person.

The Robert Stanek Message Board

Robert Stanek’s message board is incredible. If you’ve never been there, I strongly recommend spending a few minutes browsing through it.

I don’t think it’s a real stretch to guess that 90% of the users and the posts are from Stanek himself, with one or two posters being actual fans and the rest of the registered users being people who hate Stanek and just registered to read the members-only forums.

As far as I can tell, this is the only Stanek messageboard on the internet. Which is odd. Most authors have several good-sized messageboards devoted to their works, with a few smaller ones floating around. If Stanek is truly the internationally bestselling author he claims to be…shouldn’t he have a few more members on his messageboard?

I decided to scout around the internet and see how many members the messageboards for other fantasy authors had (numbers collected on April 23, 2011). This is without even bothering to try and find the largest board for each author, this is just the first results through Google:

It’s interesting to note that the last post was made on Dec 2, 2012. Stanek’s rabid fanbase hasn’t bothered to make a single post in over two and a half years? (as of June 2015)

I guess Stanek either doesn’t have the time or doesn’t care enough to keep a fake conversation going on the board. For example, last fall his new graphic novel series, A Daughter of Kings, was published. The board admin, “Shire Hobbit”, started a thread about it. It’s been over a year since that thread began…and no one has replied to it.

Another interesting thing to note is at the very bottom of his forum, he has a link to his top 25 fan sites.

You would expect, that if the Official Robert Stanek forums have a link to the top 25 fan sites, these must be pretty legitimate sites, correct? Well, you’d be wrong. In fact, it doesn’t even link to the top 25 “fan” sites, it links to the top 34 “Ruin Mist” sites. Note the specific lack of “fan” listed there. So let’s go through and analyze these links, shall we?

Here’s my question for you, Robert, when you read this, and preferably before you send a tweet at me telling me that things “meant to harm” are not okay. I can, for essentially any author under the sun, go out and find fans of their work. For any popular author, I can find fan websites with thoughtful, in-depth reviews that analyze the books and talk about why they are good to read. Do you know how I know this? It’s simple. Whenever someone recommends an author to me, I can run a quick Google search and find websites and review sites from fans of the work (or people who didn’t really care for the work). And I tend to do this before I buy books from unknown authors, so I can make smart buying decisions. I can do this for both very popular and very obscure authors. And yet I can’t do that for you. I can’t find a single legitimate website that has written a positive review of your fantasy series. I cannot find a single fan website that can pass the most obvious bullshit detectors.
You say that your books are popular, and you say that you have a lot of fans who love your books. I can’t find any evidence of this, so I say: Prove it.

LibraryThing is like an online book club. You can list all the books you own, get recommendations for new books, browse your friends’ libraries, and things of that sort. Of course, it was only a matter of time until Stanek got wind of it…and decided to start spamming it for all he was worth.

The discussion was quickly moved over to the official spam reporting thread, where founder Tim Spalding got involved: 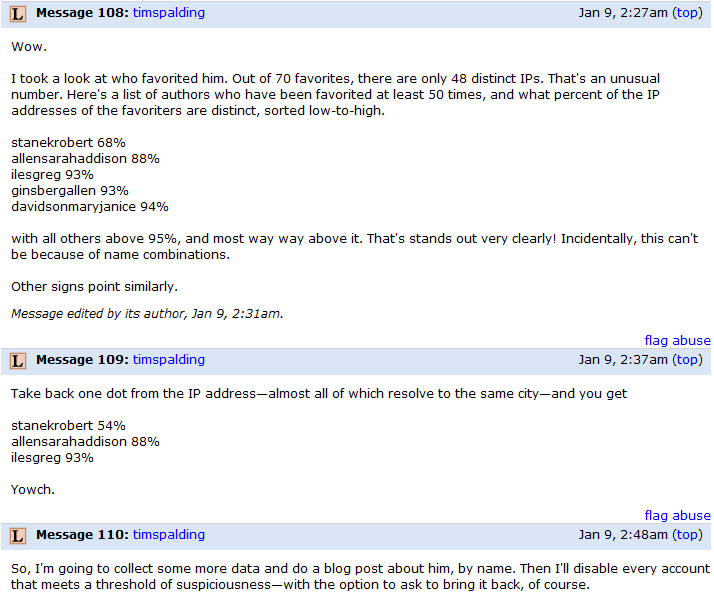 It didn’t stop there:

Just what, exactly, did Tim Spalding do? I’m glad you asked:

This warning is at the top of every single Robert Stanek page on LibraryThing.

Tim Spalding was kind enough to email me with his phone number. I called him and we spent some time chatting about Robert Stanek and his many exploits, including the evidence that Tim had amassed – particularly IP addresses. Stanek, is, of course, a computer expert – he’s written a number of nonfiction computer books for Microsoft, which I believe is how he makes his living, considering how poorly his fiction sells – and that’s how he’s able to exploit computer systems that are automated. If a person stops and spends the time examining the evidence, like Tim Spalding did, they can figure out what Stanek is up to. I assume that much larger companies like Amazon.com get millions of reviews a month and can’t individually track down people like Stanek. So a clever computer expert who can falsify IP addresses can get away with it.

Until someone with too much free time on his hands, like me, gets annoyed with him.

23 Responses to “Part Seven: An Army of Sockpuppets”