Overall, Robert Stanek was pretty quiet in the year 2012. There were a few updates here and there, but really, the only notable thing that happened was that Amazon deleted all of Robert Stanek’s reviews.

Which, come to think of it, was actually rather notable. Why would a company like Amazon.com just delete every single one of Robert Stanek’s reviews for all of his books (books written as William Stanek escaped the purge)? Why would any company do that? After all, reviews help sell books, and Stanek’s books had a lot of positive reviews, therefore it would logically seem to be in a company’s best interest to keep those reviews there. Obviously, if Amazon sells Stanek’s books, they get a cut of the profits. So why would they delete all of Stanek’s reviews?

Really, the only reason I could think of is if they had some sort of incontrovertible evidence that maybe  Robert Stanek had written almost all of the 5-star reviews himself – and decided to delete all of his reviews. 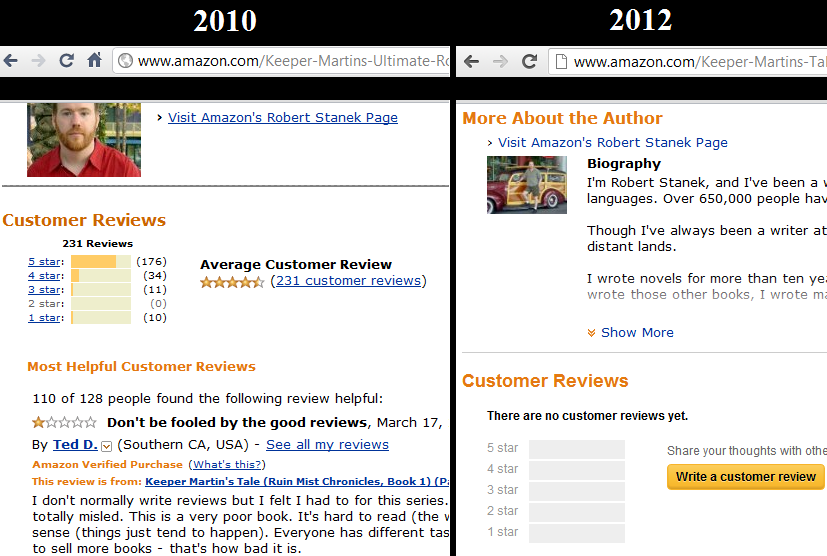 At least now Robert doesn’t have to live with the ignominy of having the most helpful review on his book being a 1-star review warning people against all the good reviews on Amazon. Which, for a beloved best-selling author with hundreds of thousands of fans, must be quite embarrassing.  Although perhaps not quite as embarassing as having a permanent spam warning on his page on LibraryThing.

Although Stanek really doesn’t seem to have much of a problem embarrassing himself in public. In September 2012, Stanek decided to endear himself to thousands of people by politely responding to someone mentioned him. 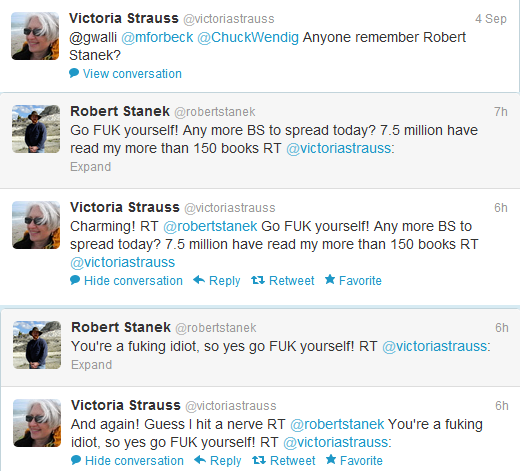 Aside from being unable to spell the word “fuck”, Stanek seems to be laboring under the delusion that Victoria Strauss is the author of this website. While flattering, this is not the case. 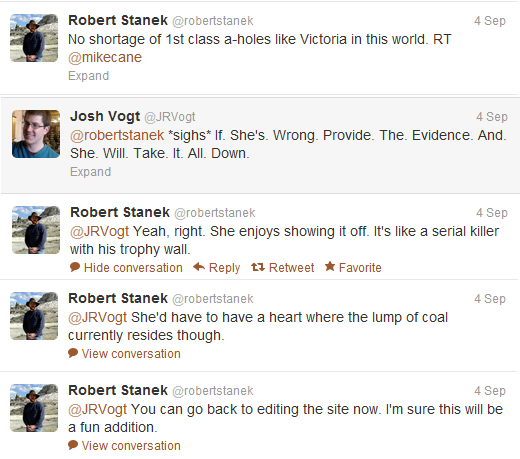 Or maybe he believes that Victoria Strauss and Josh Vogt write this site together in their spare time, along with the league of evil shadows who decided at some point to dedicate hundreds of hours and thousands of fake sockpuppet accounts to torment Stanek all across the internets.

He also spent some time promoting himself on Facebook:

Stanek also claims that his books have spent 182 weeks of Audible’s Top 10 Kids & Young Adult. This is pretty amazing because Audible doesn’t have a Top 10 Kids & Young Adult List. I mean, they do have a Kids list, and also a Teen list, although Stanek’s books don’t appear on either. It almost feels like he’s making up random shit for his books to appear on that don’t actually exist so they’re impossible for anyone to verify. Although I’m certain that a fine, upstanding gentleman such as Robert Stanek would never stoop to such levels.