I first heard about Robert Stanek on a forum thread discussing his rather dubious activities. It intrigued me at once: a man using hundreds of fake accounts to write false reviews for his own books and trick people into buying them. I didn’t doubt that it could be true, but was it true? The fact that someone said it only interested me, as they hadn’t offered any evidence. I went over to Amazon.com and started researching.

The first thing I noticed was that Stanek wasn’t shy about calling himself a bestselling author. It’s listed on the cover of many of his novels.

Bestselling is a good weasel word, because it’s generic enough that it can mean almost anything, but to the casual observer it means something very specific. People respect bestselling authors. The mere presence of that word is enough to make a consumer stop for half a second and look over a book, because people assume that if something is a bestseller, it has to be well-written or at least entertaining.

More importantly, people trust the word. Generally speaking, books that aren’t bestsellers won’t say bestseller on the cover, and so if a book says it’s a bestseller, people assume it is. Typically, it’s referring to the New York Times bestseller list, but a few minutes’ research tells us that Stanek’s books have never appeared there.

That isn’t surprising. Stanek’s books are self-published: his publisher is listed as Reagent Press, which is owned by Stanek himself. Self-published books don’t appear on bestseller lists because major bookstores don’t carry them, and if a book isn’t in all the major bookstores it simply will not sell enough copies to be a bestseller. So, what could bestseller be referring to?

Again, these claims are all vague and generic. He doesn’t say who voted him the top 10 fantasy in 2004, or what list he was on for the #1 fantasy of the year. They look great on an advertisement, but they’re completely unsubstantiated.

But let’s examine each of these in turn:

On his blog Stanek claims that “In 2002, those lies knocked the books off Amazon’s Top 50 lists after a 26 week run.” By “those lies”, Stanek is referring to the legion of haters and social misfits that he claims have made it their goal in life to destroy the legacy of his books by spreading hatred and lies across the internet about him – which is a pretty clever way to try and discredit anyone who points out that Stanek is a fraud and a liar. But let’s look at this: He is claiming that in 2002 (or, possibly, 2001), some of his books spent six months on Amazon’s Top 50 lists.

This is an incredible accomplishment, mostly because Amazon doesn’t have Top 50 lists, they have Top 100 lists. Either way, there’s a nifty little feature on Amazon.com that’s called “Bestsellers Archive” that allows you to look at any month of any year going back to 1995 and see what the Top 100 bestselling books were. A quick scan through the pages will reveal exactly zero books written by Robert Stanek that made Amazon’s Top 100 in either 2001 or 2002.

His other claims are even more obscure. Googling of “Fantasy of the Year” 2002 leads me to a few legitimate science fiction and fantasy sites that compile “Best of” lists for every year. None of these have any of Stanek’s books on them.

Searching further back on his blog, I found another, even more obscure claim:

The first two links were to Robert Stanek’s personal blog and a thread on Amazon discussing his blog and the second two were documents that contained lists of book titles, including a section of titles from Reagent Press, that claimed several awards to their names. It seems that Stanek invented this award and gave it to the most deserving person he could think of: himself.

I can only conclude that all of the obscure references to bestsellers are referring to sales figures from Stanek’s publishing company. When you’re a self-published author and your “publishing house” publishes almost nothing but books that you yourself have written, it’s pretty easy to make your own bestseller list. And, as Stanek has said himself, he’s written 100 books, so half of them would even make the Top 50 list!

All joking aside, if you go to the Reagent Press website, it says, right at the top, “The Ruin Mist books are our #1 bestselling titles.”

Bestseller lists aside, there should be a way for us to figure out how how well Stanek’s books are selling. Reagent Press doesn’t reveal sales numbers (not that I would trust numbers coming directly from Stanek anyway). Since the books aren’t sold in actual bookstore, the only real gauge we have for how well his books are selling is from the Amazon Sales Ranking.

Unfortunately, the Amazon Sales Rankings don’t say exactly how many copies a specific book has sold. The rankings are weighed towards how other books are performing, and the exact algorithms Amazon uses are proprietary, so there’s no way to deduce any exact numbers. The following information is rough estimates based off research I and others have done and it could be ridiculously inaccurate or very close to the truth. This isn’t intended to be a precise analysis, but it does give us a decent idea of how his books stack up.

For the Amazon Sales Rankings, the smaller the number is the better. The best-selling book on Amazon.com has a ranking of 1, the second-best has a ranking of 2, and so on and so forth. For example, when this was written, on January 17th, 2010, Dan Brown’s The Lost Symbol was ranked #12 on Amazon. A few more examples:

Clearly, Stanek’s books do not stack up well against other popular books aimed at a similar age group. The only book that I could find that Stanek was actually outselling was Flight of the Eagles – which, incidentally, was published by Moody Press, a Christian publisher. In 1994. But still: what do all these numbers mean? As a guess, I refer to this article, by Brent Sampson: 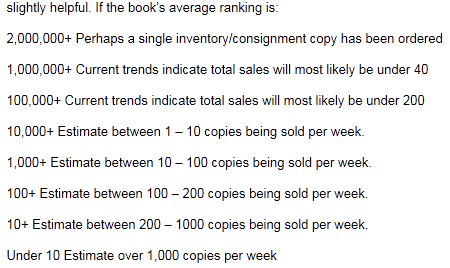 As none of Stanek’s books have a ranking under #100,000, going by this chart we could assume that none of his books have sold more than 200 copies. However, the Amazon sales ranking is subject to change. As time passes and book grows older the ranking will tend to drop (although, if a book is popular enough, it will never drop *that* low, as evidenced by editions of Lord of the Rings that still frequently pop up in Amazon’s Top 100). So how can we track how well books have done in the past? For that, we turn to TitleZ, which helpfully tracks historical rankings of many Amazon books, including some by Robert Stanek.

According to Brent Sampson’s data, during this book’s best sales week in the entire time it’s been on Amazon, it sold between 10 and 100 copies. In an entire week. Hardly the mark of a bestseller. More telling is the lifetime average. Consider this: the book Swallows and Amazons was originally published in 1930 and re-published in 1994. It has a lifetime average of 38,403.

Another site that contains helpful tracking data is http://www.novelrank.com/. You can input ISBN numbers and watch it as it tracks books over time, and this actually provides ongoing data on how many books are actually being sold on Amazon.com, estimating the total sales from the fluctuations in the sales rankings. I had it start tracking The Kingdoms and the Elves of the Reaches (Reader’s Choice Edition) a few months ago, and the results are interesting. Stanek’s books do not seem to be selling well.

However, as we’ve established, the Amazon Sales Rankings aren’t perfect. But there are some systems that do have exact information: library catalogs.

As I was researching, I noticed that Stanek mentioned several times how much librarians enjoyed his books. And, as I found out, Stanek does do a fair amount of business through both libraries and schools. Stanek has several Teacher and Classroom editions of his books. In fact, even a local library had copies of one of Stanek’s series. The books were crisp, tight, and did not look like they had been read even once.

However, if Stanek is an internationally bestselling author, that should be reflected in library databases. Walk into any large library in the country. It’s going to have Harry Potter. It’ll have Twilight. It’ll have The Da Vinci Code. It will have Eragon. And, if Robert Stanek is telling the truth about how popular his books are, it will have The Kingdoms and the Elves of the Reaches.

Thanks to online library catalogs, we can find out. Note: These are searches for any and all books written by Robert Stanek.

I could go on, but I think if the New York Public Library does not have a single copy of your books, you are probably not an internationally bestselling author.

Logically speaking, the world’s largest social networking site should, if nothing else, provide us with an idea of how popular a particular author is by how many fans he has. As of February 8th, 2010:

One of them is himself: 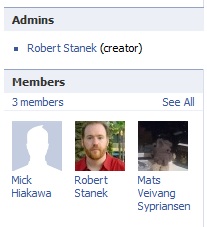 For an internationally best-selling author, with millions of books sold worldwide, you’d think he would be able to find more than 2 other people on Facebook who are fans. Not that the people listed as fans are necessarily fans; several people who are “fans” of Robert Stanek on Facebook are nothing of the sort, and have emailed me to let me know.

After I posted this article, someone posted on his Facebook page and called him on it:

Apparently, Stanek’s excuse for his Facebook page being dead is that he doesn’t advertise or promote Facebook. Oddly enough, neither does J.R.R. Tolkien. Because’s he’s dead. And yet he still has nearly 200,000 fans on Facebook. Why? Because people don’t become fans of things on Facebook because authors promote themselves, people become fans of things because they are fans of it.

His discussion board has one post, which is by himself:

It seemed clear that despite Stanek’s claims, he wasn’t a terribly popular author, and certainly not a bestselling author. However, there were hundreds of glowing five-star reviews on Amazon. It was certainly possible that Stanek had a small but rabid fanbase. I turned my attention to analyzing Stanek’s Amazon reviews.

21 Responses to “Part One: A Bestselling Author”