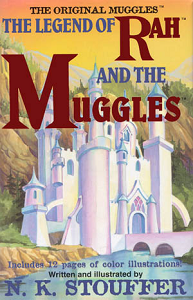 I assume that some of you are familiar with the story behind The Legend of Rah and the Muggles. For those of you who aren’t, I’ll do my best to be brief. The Legend of Rah was self-published in 1984 by Nancy Stouffer (who currently is published under N.K. Stouffer, for reasons…that will become clear). In addition to being a bad writer, Ms. Stouffer also happens to be batshit insane.

Based almost entirely on their use of the word ‘Muggles’ (even though they are used in entirely different ways) and a few vague similarities between another of Stouffer’s works, Stouffer sued J.K. Rowling in 1999 for copyright infringement. This was despite the fact that Stouffer had never sold any copies of TLORATM, and the little self-publishing company that Stouffer had formed went bankrupt a full eleven years before J.K. Rowling ever visited the United States.

It was a case that Stouffer wasn’t going to win, and it didn’t help when it was discovered that she was presenting fraudulent documents and lying in court. She was summarily fined $50,000.00 and ordered to pay part of J.K. Rowling’s attorney’s fees.

Hoping to cash in on the controversy, a publishing company brought out The Legend of Rah and the Muggles and promptly went bankrupt, which gives you an idea of the quality of Stouffer’s writing. TLORATM is again out of print and N.K. Stouffer is currently campaigning her cause at her atrociously designed website, http://www.realmuggles.com/. Meanwhile, The Legend of Rah and the Muggles holds an Amazon rating of 1 ½ stars out of 5 and a sales ranking firmly inside the ‘nobody cares’ category.

One Response to “The Legend of Rah and the Muggles”