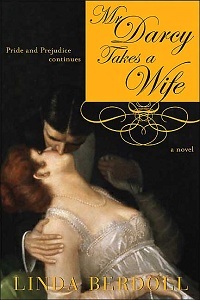 Here’s a quote from the author: “No one can come close to duplicating Jane Austen. I didn’t try.”

Well that’s good. Heaven forbid you actually even attempt to match Jane Austen. After all, it’s not like you’re writing a sequel to someone else’s intellectual property. Without permission. I mean, if I was writing a sequel to a famous and beloved author’s book, you can bet your ass that I would try my hardest to write something they wouldn’t be ashamed of.

Berdoll also argues with her detractors on Amazon, where her book holds a lofty three-star rating – a half-star below Eragon and Eldest, which should give you some idea of what we’re in for. Perhaps coincidentally, Berdoll shares Paolini’s trait of tossing in long words from a thesaurus every chance she can get. Unlike Paolini, who does it to look smarter or because he thinks they sound cool, Berdoll does this in a futile attempt to make her writing seem Austen-like. Like Paolini, she fails. Dramatically.

One final note: this novel could be tastefully described as pornographically explicit. Hence, these sporkings should be read at your own risk.