Maradonia™ and the Seven Bridges » Part 22: We Will Perforate You

We join Big Bertha, who is unable to sleep because she’s still thinking about the footprints in the snow. She tries her best to talk herself out of it but eventually decides to fly around to take her mind off things. She does so and eventually flies back in to the castle and flies over the water park. Unsurprisingly, she notices that all of the mermaids are gone. Bertha is delighted.

“I was all the time right! We had intruders in this palace… Ha-ha ha- ha- ha- hallucinations? I had the hunch… the intuition… the instinct… the clue!” (page 525).

I wonder what the world that Gloria Tesch writes in must be like. Apparently, sentences like ‘I was all the time right’ make sense, and yes, all of those spaces between the ‘has’ are correct. She put in hyphens but then an extra space after the hyphen. Why? I don’t know.

Bertha spends a solid page congratulating herself instead of, I dunno, raising the alarm? Eventually she starts wondering how they escaped and flies around looking for clues. She quickly finds a trail of water leading directly to the locked door that only Apollyon has the key to.

Finally she does raise the alarm, but the park keepers don’t believe her and tell her to stop bothering them. They even throw some things at her, but she persists. Eventually one of them gets up to show her where the mermaids sleep at night so she’ll shut up and leave them alone. Of course, he then realizes that they’re all gone.

The park keeper ran back to his quarters and yelled, “The mermaids have escaped! The mermaids… have…!” he grabbed at his heart with his right hand and fell flat over to the ground and he breathed his last.

The park keeper had died by a heart attack because he feared Apollyon’s punishment (page 528).

I don’t know why, but this just amuses me to no end.

So everyone gets up and there’s a big hullabaloo and they cannot get through the door, of course, so after a very brief discussion they decide that even if the mermaids managed to escape the water park, they’ll never be able to escape the castle itself. So they decided to go back to bed and worry about finding them the next day [!!!].

Are you fucking kidding me? You expect us to believe that they are so terrified of the wrath of Abaddon that someone keeled over and died of a fucking heart attack and yet after this, everyone just decides to go back to bed and worry about capturing them in the morning? The lack of respect that Gloria Tesch has for her readers astonishes me.

Chapter Sixty-Five – The Escape From the Cave

This chapter begins on a funny note:

It was still quiet in the cave of the unicorns until one of the cave keepers woke up for a drink of water.

Still drowsy from sleeping he swayed and staggered to the water place and tried to drink from the water but when he started to scoop some water with his hands he saw the head of a mermaid under the surface of the water.

With a fish tail, of course.

At that moment Mighty Bronco, the strongest unicorn, pushes the “brake log” that holds up the “granite stone” door out of the way. I’d like to pause for a moment, not to emphasize the stupidity of phrases like ‘brake log’ or ‘granite stone’, but Bronco.

–noun, plural -cos.
a range pony or mustang of the western U.S., esp. one that is not broken or is imperfectly broken.

It seems obvious to me, at least, that the use of this word as a name for a unicorn who lives in NarniaMaradonia is moronic. Your mileage may vary, though. It’s clear that Tesch’s does.

The unicorns charge out of the door and gallop off. Fayina stays behind to make sure they all escape. After all the unicorns have left she suddenly realizes that there’s a little baby unicorn has accidentally been left behind. And the guards are rapidly approaching. She only has a minute or two to decide what to do. So, guess what she does. Seriously. Guess.

Give up? Okay. And I swear I’m not making this up:

Fayina turned to the frightened baby unicorn, knelt down with her front legs and bowed her head all the way to the ground so that she could pick up the baby with her long horn. Then she turned around and laid the baby unicorn softly over her back (page 533).

This is sheer unadulterated brilliance. So she kneels down and slides her horn carefully under the baby unicorn, choosing the precise spot where the baby unicorn will be perfectly balanced on her horn and won’t slide off either side. She then picks the unicorn up and turns her neck around – if you’ve spent any time with horses, you know this is flatly impossible, their necks aren’t that flexible – so she dislocates her neck and cranks her head around about 180 degrees and carefully balances the baby unicorn on her back – and then she gallops off, with the baby unicorn staying on her back…how? I have no idea. It’s not like they have opposable thumbs or anything. I didn’t think I’d ever be saying this, but I think I have found something with less knowledge of basic horse anatomy than Sylvia Scott Gibson. Next thing you know these unicorns will be rolling joints and learning about why it’s dangerous to play drinking games.

Arabella, the snake (one of Apollyon’s spies) is meandering along filled with angst. She’s pissed because nobody wants her advice. Anyway, she’s going through this grassy valley and the ground starts vibrating. She starts to freak out a bit. The vibrations get worse. Finally she realizes that an entire herd of unicorns is charging towards her. So she does what anyone would do with death approaching: She launches into a soliloquy.

“Oh no! Please stop! I am Arabella… I am famous for my wisdom and knowledge! You must honor me! Stay away from me! Oh no… that looks like trouble. I was always good and I don’t like trouble. Who can help me? I always thought… people would… ouch… oh no… respect me… but I think… I was… wrong.” (page 536)

Anyway. She dies. A fitting end for a thoroughly useless character.

Chapter Sixty-Seven – Chaos in the Palace

Everyone is freaking out. The guards from down below came up and told everyone that the mermaids and unicorns have escaped and are heading towards the plateau of death. Everyone talks about what they should do and how all this was accomplished. Bertha cackles a bit about all the feelings that she’d had and everyone ignored. Honestly, I’m not sure why she feels so great. When Apollyon finds out that one of his spies knew all of this for weeks in advance and didn’t do anything about it, her fate is going to make Hell seem like a mercy.

“Bertha, if you do not leave very shortly and bring this message to King Apollyon we will pierce you! We will perforate you and we will riddle you with arrows.” (page 541)

I think just ‘We will shoot you’ will work fine, Tesch.

Finally Bertha agrees to go, after warning them to not touch the snake-head that Joey left by where Apollyon kept the key to the underworld. 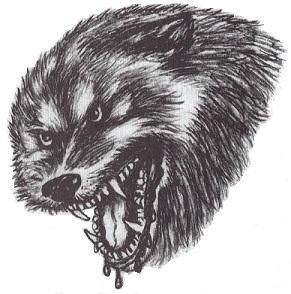 That doesn't look like a wolf. Maybe a rabid raccoon?

The unicorns travel along. Maya and Joey leap from unicorn to unicorn, readjusting the mermaids on the backs of the unicorn. In mid-gallop. In the middle of a stampede. I know that this Tarnkappe gives them ridiculous Suelike powers, but seriously? This is ridiculous. You have an enormous herd of hundreds and hundreds of unicorns galloping along at full tilt. Maya and Joey have to hold hands. So what, they leap forward, land on the ground in the middle of a stampede, adjust a mermaid, then instantly leap again to avoid being trampled by the unicorns behind them? This Tarnkappe gives them the power of invisibility and they can take jumps a mile long. They don’t have reflexes that border on precognition, and they’re not in the Matrix. What are they supposed to be, fucking ninjas?

The baby unicorn riding on Fayina’s back is doing better and reunites with his mother. And they all journey along and it’s very exciting.

We cut back to Captain Goran who is waiting at the ‘Hunters Game Camp’ with the group of six unicorns.

It was very difficult for him to wait alone at this place surrounded by several hungry packs of wolves and several bear families with cubs (page 544).

Wolves are territorial, packs do not intrude onto the land of other packs. A mother bear with a couple young cubs would not sit around at the perimeter of a group of unicorns waiting for an opportunity to present itself. She’d either attack or leave.

This night, things aren’t going well. Goran arms himself with a spear and has the unicorns stand it a circle with their horns facing out. The wolves attack. Goran and the unicorns kill a bunch of them. Things aren’t looking grim, and they look even less grim when Captain Armstrong shows up with a bunch of archers and they mow the wolves down. Well, that was an anticlimactic end to a boring fight scene.

The captains talk and decide that Maya and Joey must be dead. They angst about this for two solid pages. Goran cries for a bit. No joking. Then Captain Armstrong cries for a bit.

They’re setting a wonderful example for their troops.

One Response to “Part 22: We Will Perforate You”