Maradonia™ and the Seven Bridges » Part 12: Then They Eventually Also

Wow. A country named after a plant from our world. That’s creative.

So they ride along and get to the swamps. Apparently it’s very dangerous around here because there isn’t a path. I guess that maybe you can fall into quicksand or something, because Tesch doesn’t bother telling us exactly what the danger is. Getting lost? Falling into the marsh and drowning? Being eaten by the Swamp Thing?

I like that Tesch italicizes all of Joey’s little nuggets of wisdom. It tells me in advance what I need to quote, because they’re always going to be incredibly stupid.

In the first place, why is Joey randomly bringing this up? He and Goran aren’t in the middle of a conversation, they’re just riding along and Joey brings it up. It makes no sense.

Second, taking nobody’s advice is not necessarily a bad thing, as long as you’re an intelligent person who knows what they’re doing. If you’re the most qualified person in a particular area, it’s probably best to not take advice.

Third, taking everyone’s advice is usually impossible because people disagree on things. But on the off chance that every single person is giving you the exact same piece of advice, they just might be on to something. So ultimately, Joey’s nugget of wisdom is imparting nothing.

Goran says they shouldn’t cross the marshland without a scout to guide them across. This sounds like something you should have realized before you’re actually at the marshland. After all, everyone knew where they were going, and Goran clearly knows that this marshland is bad news. Shouldn’t they have planned appropriately, doing something like finding a guide in advance, or, failing that, journeyed around the marshland instead? Which settles it: Goran is a shitty leader as well. I don’t have much hope that anyone in this book will be remotely competent.

Goran scouts through the troops to see if anyone knows the marshlands. No one explicitly does, but there’s a chap named Petronio who knows some fishermen who fish in the swamp. Despite the ‘hundreds of aggressive crocodiles and many other wild beasts’ in the swamp. Yes, that’s a direct quote.

“if these men know the best fishing places then they know eventually also a secure way through these swamps” (page 243).

Then they know eventually also? Doesn’t Tesch actually read her sentences out loud?

Goran and Petronio head off and find the fishermen, but they don’t want to leave their boats. Goran whips his sword and orders them to come. Great. Threatening the locals. That’s a great way to win people over to your side.

So as the fisherman are walking back they surreptitiously plan to lead them into the swamp to the left, and then double off to the right. The army will continue into the left and disappear and die horribly, leaving their equipment behind for some reason. Then the fisherman can come back and steal their equipment. Which the food will have spoiled and the weaponry will be in the swamp, heavy, and covered in blood and muck. And who are they going to sell it to, exactly? Eh, I shouldn’t overthink this. The fishermen are clearly morons.

When they get back Joey has a bad feeling about them. This enrages me. It is cheap, shitty storytelling, and a total cop-out. In real life, you do not always get a Bad Feeling when someone who is Evil shows up. In real life, you can actually make mistakes and trust the wrong people. But Joey is the Chosen One and so of course he is never going to have anything bad happen to him. Fuck you, Gloria Tesch. You are a horrible and untalented writer.

Joey asks them if they have any families. The fishermen say yes, and during the course of it, it comes out that the wife of one of the fishermen left him because he was beating her with a stick. Which is kind of random, and also odd, considering that during certain periods it was socially acceptable to beat your wife. Anyway, the fisherman explain the best path through the swamps and say they’ll guide them. Afterwards, Joey pulls Goran and Petronio aside and says he doesn’t trust them. So he has a way of guaranteeing their assistance: he’s going to take their families hostage and not release them until they get to the other side.

Setting aside the fact that the fishermen’s families aren’t around and they have no idea where said families are, this isn’t a bad plan. But it is an evil plan. Let’s face it: you are grabbing their wives and children at swordpoint, forcing them to accompany you, and threatening the fishermen that you will kill their families if they lead you incorrectly. It’s not really morally defensible. This is the kind of thing the Bad Guys would do, not our noble heroes. And lest you say that they don’t have a better option, I would like to point out that God – er, sorry, the ‘Kingdom of Light’ has been deus ex machina-ing them out of every bad situation. Why not trust in them and just go for it?

Maya exposits, to herself (e.g. the reader) everything that has just happened. Just in case the reader was too stupid to figure this out. Or maybe Tesch is just trying to pad the novel to expand the page length.

So the fishermen quail and lead the army correctly through the swamp and afterwards Joey releases their families. Joey starts randomly talking to one of the kids who is called Danny. He asks the kid what his name means, and the kid replies that it means ‘judge’. Actually, Daniel means ‘God is my judge’, which is pretty much 100% different.

Joey confronts the fishermen and says he now knows that they were planning on killing everyone. The fishermen immediately confess and start apologizing instead of denying everything, which is a terrible idea. Denying everything is always the best idea. Anyway, the fishermen say they only wanted to murder the entire army to create a better life for their families. This touches the hearts of Maya and Joey because they flash back to their own parents, which is a little creepy. Anyway, Maya and Joey forgive the fishermen and invite them to join the army. Naturally, both fishermen are delighted with the idea of having their young families join a tiny army that is destined to be brutally slaughtered to the last man. Hooray! 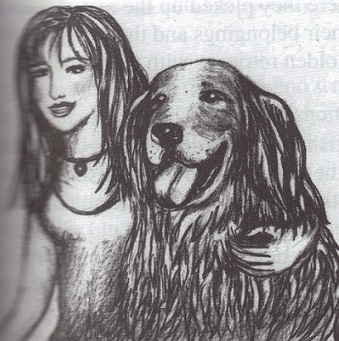 The fishermen pack up their belongings, which includes a golden retriever called Phoenix. Now, normally, the fact that we are currently IN AN ENTIRELY DIFFERENT WORLD and there is a fucking golden retriever named Phoenix would send me into an apoplectic rage, but I’m not going to lie, I am slightly inebriated as I type this sentence. It’s very calming.

Maya is staring at the dog with joy and the fisherman’s family notices and decide to give her Phoenix as a present. The entire family agrees. Speaking as someone from a large family, there is no way in hell that every kid would just agree to give away the dog. Most kids would rather sell a sibling into slavery than give up a beloved family pet.

So they give Phoenix to Maya and the girl and dog instantly have a Connection. Naturally.

We end with an infuriating quote:

Maya and Joey were pleased with their presence and it was the right decision to include these two fishermen families into the service of the assembly (page 256).

Of course it was.

They’re getting close to the capital of Maradonia where King Astrodoulos lives. Some cavalry comes out to meet them. The leader introduces himself as Felipe, which amuses me for some reason. Felipe looks at Maya and Joey and says that they must be the Encouragers. Apparently they’re known everywhere. No. They’ve been in Maradonia for less than a week. News travels slowly. They do not have internet or phone lines.

Felipe talks about how awesome Maya and Joey are:

“Everybody wants to have a little glimpse of you and if somebody has a chance to touch you, they will get hysterical.” (page 259)

Unlikely, as they aren’t rock stars. I like the way this was handled in Narnia: their presence was foretold, they’re going to be saving everyone’s skins from the White Witch, and while the Narnians are generally pretty happy to see them, they aren’t falling over themselves to fellate them. Then again, Gloria Tesch =\= C.S. Lewis.

Nothing happens for awhile. And by ‘awhile’, I mean nine pages. You see, usually when a new character shows up and wants to know what the main characters have been up to, the author will make it short and sweet. Something like this:

Maya and Joey told Felipe everything that had happened to them in the Land of Maradonia.

Tesch, on the other hand, goes into explicit detail recounting everything that has happened to them. Even though we already know all of it. Because we actually read through it the first time.

Chapter Thirty-Seven – Triumph in the City of Selinka

They arrive to what is essentially a tickertape parade. Everyone is out to see them. It’s very exciting. So they send the army off with the citizens to eat and rest and leave all of their provisions with Petronio and the fishermen. You know, the fishermen who were just recently planning on killing 300+ people to steal everything that belonged to them. The same.

Maya and Joey head in to meet the city elders. Felipe introduces them and then gives a speech that lasts for five and a half pages. And no…it really isn’t very interesting. At all. Most of is stuff the city council should know. He mentions the mermaids are in danger. Well yeah, we knew that. He also mentions that Apollyon’s men stole the unicorns and Maya and Joey recovered them. Yeah, we knew that as well. Felipe also talks about what Maya and Joey have been through and that they are The Encouragers. Yes. We know that. You don’t need to reiterate what we have just had to painfully live through.

Tesch does the literary equivalent of trying to pump her audience up through text. How? By using a lot of exclamation marks, italics, and dramatic spaces and empty lines on the page. It looks ridiculous. But the basic idea is that Maya and Joey are awesome, and they’re here now.

I hate this book.*

*So does my liver.

4 Responses to “Part 12: Then They Eventually Also”