Maradonia™ and the Seven Bridges » Part 26: The Square Pig

Chapter Seventy-Six – Death of the Kings

Great chapter title there. I have no idea what’s going to happen in this chapter.

Two of AstroJesus’ twelve servants are out in the garden taking care of the roses. I just noticed that he has TWELVE servants. Like the twelve apostles? Subtle, Tesch.

Anyway, the two rose-trimmers hear and see what happened with Florie and they run screaming inside the house shouting that King Abbadon is here.

All the servants of King Astrodoulos, who heard this message dropped everything and disappeared through the back yard into the coconut creek area (page 626).

It’s good to see that AstroJesus’ servants are so loyal to him that they go running at the mere mention of King Abbadon’s name. That’s the kind of loyalty I really want the ruler of the free world to inspire. Also, what the hell is the coconut creek area? What does that even mean? Is the creek coconut-flavored?

Actually, one of the servants, a chap named Parnell, stays behind and hides in a wardrobe. Evidently he hasn’t heard how foolish it is to shut oneself inside a wardrobe. More importantly, when Tesch just wrote the word “all” one paragraph up, she was lying.

“I saw you coming Abbadon. You came with the help of a traitor into my land and my own people heaved you over the pinnacle over the south tower and now you are here to kill me. You have scared my servants. You showed your real face to Florie and she lays slain in front of my estate. My people are afraid of you and they fled into different directions. You stand with ‘Titus’, the sword of the Titans, in your right hand and a dagger in your left hand in front of me and I am an unarmed man because I proclaim peace and you proclaim war.” (page 626)

It’s clear that Tesch has no idea how to write a dramatic confrontation. Apparently she thinks that someone pointing out random facts about the other person that everyone, including the audience, is aware of, is very dramatic and powerful. So, to help her out, I thought I’d make this helpful diagram:

Abbadon demands that AstroJesus fight him. So AstroJesus gets up and gets a sword and shield, but not a helmet.

King Astrodoulos said, “Abbadon you are indeed a powerful king, who has overthrown so many other kings in the past, but today is not your day. I have the greater mind and I will use my power against yours. Brain power always beats muscle power.” (page 627)

Usually, that’s true. The one time that it isn’t true is when you are in a room with someone who’s a lot stronger and a better fighter than you and it’s a fight to the death. The idea of brain power is to keep yourself from ever getting in that position.

They ramble for a bit longer and finally they charge each other. It’s very dramatic:

They shouted and ran like war horses and charged toward each other. Those two kings who represented totally different worlds, different mentalities and thinking patterns rushed against each other like lightning and they were cruising the ground with violent speed. The two fierce kings crashed together like thunderbolts. Each man was fighting with his drawn sword and they rushed together like two fighting bulls in an arena (page 628).

This continues until AstroJesus’ sword shatters. Abbadon then smashes AstroJesus’ shield in half, but AstroJesus grabs a spear off the wall and the fight continues, until AstroJesus sticks the spear clean through Abbadon. Abbadon realizes he’s fucked. But he also knows that AstroJesus has an Achilles…shoulder. And, of course, immediately after he’s been speared he finds the opportunity to stab AstroJesus into the shoulder. Downward, apparently, because it’s a mortal wound. AstroJesus isn’t worried because he foresaw the entire fight and knew this is what would happen. I wonder why, though, if he can foresee how the entire fight would happen, he couldn’t change his strategy so he didn’t die?

Abbadon falls down dead and AstroJesus slumps down into his throne, leaking profusely. It’s about this time when Maya, Joey, and Genarius show up. Maya freaks out and wants to pull the dagger out, but AstroJesus says it’ll just make him bleed out faster.

King Astrodoulos looked for a long moment at Joey and said with a calm voice, “Joey… you have a good heart. The day will come when you will rule as king over two different kingdoms at the borders of the ‘Land of Maradonia’.” (page 631)

What? He’s going to be the fucking king? This dumbass? And…he has a good heart? Seriously? The same kid who just fried a bunch of ravens out of the sky for shits and giggles?

WHETHER. Not WEATHER. Just because Microsoft Word doesn’t put a squiggly red line beneath the word doesn’t mean it’s the correct word.

Genarius cries for a bit, and then Parnell, the servant who was hiding in the wardrobe, comes in with the city elders. It’s a small bit, but let’s examine this. First, Tesch goes to the trouble to explain that Parnell was hiding in the wardrobe. This is the equivalent of an unfired Chekhov’s Gun, because it never amounts to anything. Parnell could just as easily fled with the rest of the servants and then come back with the city elders. Second, the time frame doesn’t make sense. Even if Parnell left immediately after the fight began, the fight was only about five minutes long, and Maya and Joey have only been talking to AstroJesus for about five minutes. So in the space of ten minutes Parnell had time to leave, round up every single one of the city elders from wherever they were, and lead them all back to AstroJesus’ pad. Finally, Parnell doesn’t know that AstroJesus won the fight. For all he knows Abbadon could have won…which means that he is bringing all of the city leaders directly into a trap. How fucking stupid is this guy, anyway?

Anyway, AstroJesus appoints Genarius King of Maradonia. Everyone bows down. AstroJesus tells Genarius to marry the lady he has the hots for, and as a wedding present, gives him a mirror that shows the future, but not the present. He then says that Maya and Joey are now Princess Maya and Prince Joey and are part of the Royal Family. He tells Joey to use the Key of the Underworld wisely. He tells Maya that when the time comes she needs to bring the king’s child to the camp of Dominatio. He then gives Maya a present, rambles for a bit, and finally asks someone to grab the book which is called ‘Education Book of Light’. Exactly that. Hilton, one of the elders, does so. AstroJesus asks him to read Zurie 540 to 545:

“If somebody wants to steal from you a dress or a suit, let him have your coat also. And whoever asks you for a favor to go with him one mile, go with him two miles…” (page 636)

If this sounds familiar, it’s because it’s from the Bible. From the Book of Luke, Chapter Six, verse 29:

“And from he who takes away your cloak, do not withhold your tunic either.”

AstroJesus tells everyone to live by the Bible – sorry, the Education Book of Light – and everyone will be happy and there will be peace. Then he dies.

Genarius tells the servants to take the body away and start preparing for the funeral.

Genarius gives them a note warning everyone not to touch Abbadon’s corpse – after they have already not touched Abbadon’s corpse, which is awfully lucky. They toss Florie’s corpse into a wagon, tie Abbadon’s corpse to the back, and drive to the south tower. They climb up top and pitch Florie’s body over the wall, but it proves difficult to drag Abbadon’s body up the stairs without touching him. One of the soldiers sums up how difficult they’re making it:

That does sound pretty difficult. First of all, where, precisely, would you find a square pig? Does it look something like this? 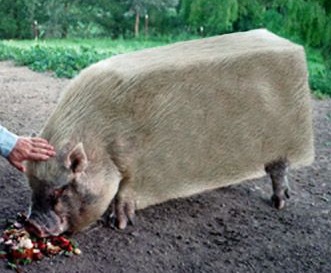 So they decide to ignore their new king’s explicit order and carry the body up the stairs. Instead of, I dunno, finding a stretcher, putting the corpse on that, and carrying it up via stretcher? Anyway, after they throw the body off huge boils break out all over their bodies. The pain drives them insane and they all leap off the tower to their deaths.

As soon as Abbadon pops off, King Apollyon flips his shit. He runs around his palace at mountain peak glacier (for some reason it’s not capitalized this time even though it’s a proper name) screaming and yelling advice at his dead son. And helpfully expositing that if he can’t find Abbadon’s corpse in the next three and half days, he’s gone forever!!!!

We cut back to Selinka and they’re preparing to crown Genarius king. There’s a couple awkward and stupid monologues. My favorite is this one:

The long and short of it is that Genarius is crowned king. Afterwards, they call Maya and Joey up. Genarius taps them on the head with his sword (that he took off Abbadon’s corpse…but it’s somehow not Evil) and proclaims that they are Princess and Prince, respectively. And gives them silver crowns. Everyone cheers, except General Felipe and a few other officers, who look depressed.

Next, Genarius names Captains Armstrong and Goran to the rank of General. Genarius tells them both to kneel down.

“Receive the tip of my sword on your right shoulder.” (page 647)

I have a dirty mind. Let’s just move on.

Everyone cheers, they party it up for a bit, and that’s the end of the chapter.