This chapter has minor technical changes, all for the better, and corrected numerous errors, such as “there” to “their”, which is nice. They also misspelled “possess” as “posses”, which is less nice.

Identical, for awhile, and then this gem:

Maya came so hefty under the influence of this unusual atmosphere of heavenly music (location 1939).

Came so hefty? What does that even mean? And get your mind out the gutter.

It continues to be more or less identical until Tesch tells us that Maya feels “suddenly pretty numb.”

Tesch hasn’t fixed it, so the unicorns still have holsters instead of harnesses, which would actually have been pretty high on my list of things to fix, since it’s fucking retarded. Joey still gets a Blitz Action to the brain, which is still italicized, although the quotation marks are gone. He pulls out his knife – hang on, Tesch, Joey doesn’t have a knife, remember? You changed it to a machete. Don’t tell me you didn’t correct all of the old references to a knife? You do realize that Word has a handy find and replace feature, don’t you?

No real changes, although now one of Maya’s escorts as she’s gallivanting around the Lake Lagoon is Captain Henry, who she’ll fall in love with a bit later on.

Again, no real changes, although she’s still the most beautiful black woman, and there’s still the nonsense about the deadly index finger. I am pleased. It means that Maradonia will still be recognized by a whole new wave of readers as the absolute crock of shit it truly is.

Chapter is more or less the same. Tesch continues to remove the nonsensical ‘quotation’ marks, but there are still plenty of moronic italics in there for no reason, and worse, she’s added italics in many areas that don’t need it.

Then we get this gem, when Joey is marveling at their jewel-encrusted silverware, and mentions that they eat off plastic back at home.

“Plastic plates and plastic cups? What is that?” Senator Hilton asked suspicious (location 3848)

Shouldn’t that be “suspiciously”?

They changed Maya’s line from “it’s your funeral” to “it’s your free will decision”, which doesn’t really make sense, but it does make Maya less of a bitch.

This chapter is titled Blood Bond rather than Blood Warrior Bond, and it has a crazy confusing picture instead of the connected letters images from the previous version, which is step up in the same way that a poorly made pie is a step up from a cow pie.

The people were amazed to see the King of Maradonia in person and greatly surprised they bowed deeply down because the appearance of the legendary king in the public was a very seldom event (location 4223).

Holy fuck that sentence is atrocious.

Shouldn’t that be “in public” instead of “in the public”?

Shouldn’t that be “a very rare event” instead of an abuse of the world seldom?

Chapter title is changed from “Rouganda Completely Destroyed” to “the Village of Rouganda”, which does a much better job at not being a spoiler.
The powers of evil still believe in teamwork!

Tesch didn’t correct the mistake from “quite” to “quiet”. I’m starting to suspect she didn’t use my sporkings as a guide for editing her book.

In the old version:

“We have time…we can play our favorite game with them… cat and mouse!”

Fair enough. A little retarded and obvious, but okay. Here’s the new version:

“we have time… we can play our favorite game with them… ‘Kitty and the Mouse-chens’!” (location 4674)

Instead of Abbadon playing hardball, now the Demonic Trinity plays hardball. Which is a pretty big difference.

By and large, most of the changes to the wording and grammar through this updated version are for the better. Sure, there’s been a few idiotic phrases that were left in the same as the old version, but for the most part, if it’s been changed, it’s better. It’s like they actually had an editor go through and mark it up with red pen. Not a particularly good editor, but maybe some college dropout who read a lot and got B-plusses in English.
Then occasionally you get bits like this:

Old version: searching through many of his very old books but he could not find the answer

Short, sweet, and to the point. But they decided to change it, for reasons that escape me:

New version: searching through many of his old books but he was unable and could not find any answer

What, precisely, does the “unable” add to this sentence?

Apollyon searched and searched through many more books but he could not find the location of the pool until it was suddenly absolutely clear to him that this pool still existed, somewhere in the triangle between Thordis River, the Canyon River and the Cornerstone Mountains at the foothills of the plateau (location 5286).

So….he searches and searches and finds nothing, which makes it clear to him where the pool is. Yeah, that makes sense.

After Abbadon kills Remmilos with a fireball, we find out:

Orphilios and Marcarios who were definitely possessed and literally eaten up by their thoughts of revenge (location 5590).

This chapter has been reorganized a bit. Orphilios and Marcarios follow Plouton outside halfway through the meeting and plant the idea to have Abbadon disappear and install Plouton in his place. We then cut back inside to the meeting. There’s some actually really nice bits of characterization for Plouton, who gets more and more bitter as he isn’t chosen to lead any of the divisions of the army.

In the original version, someone asks why they don’t use their air ships to attack. All mention of the airships, spaceships, and aliens has been removed, and now it’s “Giants from the inner earth”, which is adorable. The mother earth song bit is cut out entirely, and the book ends on this note:

“We will get drunk…by drinking the warm blood of our enemies!” (location 5755)

Isn’t this book marketed towards kids? Adorable little kids? Like this one: 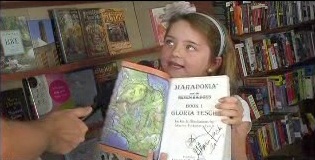 But that’s it. That’s the e-book. Overall, it’s a significant step forward, from “eye-gougingly bad” to “appallingly bad”. Unfortunately, if you want it for the lulz, it’s significantly less funny than the original edition, so be warned. If you’re thinking of springing for the actual book, I’d recommend buying it used off Amazon, as you can get the original version for roughly the same price, and have twice as much story, to boot.

In closing, I’ll point you to this review on Amazon where Team Tesch explains why Gloria Tesch can write better than Neil Gaiman.