Maradonia™ and the Seven Bridges » Part 25: He Loved The Women 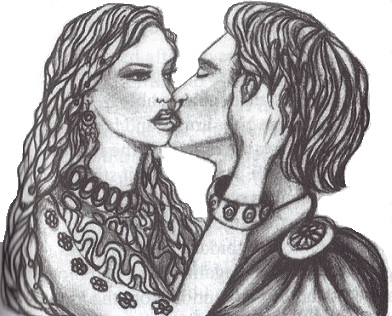 King Abbadon’s army is getting ever closer to the city of Selinka.

It was absolutely forbidden for the fairies to use supernatural powers against flesh and blood in fear of a deadly intervention from the king of light except thunder and lightning and the sound of rushing waters (page 600).

I’ve mentioned this before, but it’s worth mentioning again. We had a scene not too long ago, 240 pages to be exact, where the fairies used supernatural powers against Maya and Joey and their army. Luckily, most of the army had bathed in the Deus ex Machina lake and were indestructible, but a few people were fried to ashes. Why didn’t the king of light intervene then? And why would he intervene now? This doesn’t make any sense. Neither does allowing them to use lightning. So, you can’t use your supernatural powers…except to call down bolts of lightning to magically destroy your enemies? Okay then.

The war meanders for a few paragraphs until Abbadon realizes the city is quite well-defended and it will be difficult to take it. He remembers what Apollyon said about finding a traitor within the city.

We cut over to a chap named Aurek, who is, as the chapter title suggests, a gambler.

Aurek was a very handsome man but he was a player, a gambler, very slick and he loved music, wine and the women. He was always funny. He loved the women and the women loved him (page 601).

I’m picturing a twelve-year-old Gloria Tesch typing phrases like ‘he loved the women’, and it just makes me uncomfortable.

Aurek is the nephew of the unusual-bearded General Brody. They are tight because Aurek brings Brody some of his girlfriends as ‘companions’. In the Firefly sense, no doubt. Brody’s favorite is a wench named Florie. However, Florie is cold-hearted and crafty and really only has eyes for Aurek.

Every day Aurek stands on the city walls thinking about how to squeeze some money out of the war. That sounds like an excellent way to get shot. But Aurek decides to sell out the city. So he chats with Florie. Florie wants to get married to Aurek and have them become King and Queen of Maradonia, which Aurek thinks is a fantastic idea. He hatches a plan: He’ll send Florie in to flirt with Brody and present a plan to him: lower Aurek over the city walls in a basket! Aurek says they’ll tell Brody it’s so he can spy on Abbadon while under the pretense of asking Abbadon for peace terms. However, he’ll actually be selling Selinka out to Abbadon! It’s brilliant!

First of all, why would they expect Brody to agree to this? Brody isn’t in charge. Doesn’t a peace ambassador need to be cleared through, I dunno, the KING? And if he’s sending out spies, shouldn’t he at least be clearing this through superiors?

Second, why does Aurek want to involve Brody anyway? Doesn’t he have any evil compatriots who will lower him over the walls?

Third, there’s an excellent chance that, if Aurek was really going spying, he’d be executed on the spot. Brody would know this and not want to let his nephew go.

Fourth, the city is completely surrounded. And the walls are lined with soldiers. How, precisely, are they going to lower him surreptitiously over the walls?

Anyway, Florie thinks this idea is brilliant. She sluts herself up and they head in to chat up Brody:

As usual Aurek greeted, hugged, and kissed his uncle Brody on his hairy cheek.

I’m getting some odd vibes here. That might just be me though.

Florie and Brody talk and Brody is convinced that Aurek will be okay spying on the enemy, even though he isn’t a trained observer and is, in fact, a gambler, an alcoholic, and a whoremonger. Brody gets a couple of trusted men and sends them off to lower Aurek over the wall.

However, things aren’t sitting quite right with Brody:

The General looked at Florie and said, “I really do not know what’s going on here. I have a strange feeling but let me ask you a question: Florie, do you really like me or do you despise me deep down in your heart?” (page 611).

If you have to ask, you’re doing it wrong.

Florie reassures Brody that she thinks he’s the cat’s pajamas and then roofies his drink. It kicks in and Brody realizes what happened. He tries to get up but falls over, cracking his head on the edge of the table and instantly dies.

Aurek strolls over to the army and is promptly apprehended and frisked. He says he has a message for Abbadon so the guards take him over to Abbadon’s tent. Aurek launches into a prepared speech about how Brody is old, AstroJesus is old, and Maradonia needs new leadership.

Abbadon points out that he can read Aurek like a book and knows precisely what he wants. He also can apparently see Aurek’s and Florie’s thoughts.

I really hate the openly evil trope, where characters freely acknowledge that they’re evil. It’s completely outside human nature. Everyone is the hero of their own story. Truly evil people almost never recognize or understand who they really are – they believe that they are good, or at the very least make excuses for what they do.

Abbadon reveals that Brody is dead, which horrifies Aurek. Abbadon asks Aurek if he came to tell Abbadon that he should sneak back into Selinka wearing Aurek’s clothes, which sounds like a terrible idea, but it’s true. Abbadon then asks if Florie knows where AstroJesus lives. Aurek replies to the affirmative, which might not have been the smartest response. Abbadon then points out that Aurek would be arrested for treason, which is true…if people knew he was a traitor.

“Who can trust you? Many people love treason and treachery, but they hate the traitors. Do you not know that?” (page 617).

I guess it depends on which side you’re on, but that might be true. Generally speaking, if the traitor is betraying people to your advantage, you’re pretty stoked about the entire thing. Although it is true that you would never really be able to trust the traitor himself.

Abbadon snaps his fingers and some guards come in. He has them strip Aurek down to his boxers and drag him off to the executioner, who promptly chops off Aurek’s head.

The executioner looked at the headless body of Aurek and said, “I assume that this man did not know that we don’t keep prisoners.” (page 618)

Not going to lie, I burst out laughing at that line, and it was because it’s genuinely funny. Either that or the vodka.

We cut over to Maya and Joey, who have received a message from General Genarius. They take off on horseback and get back inside Selinka. Despite the fact that the city is completely surrounded by Abbadon’s troops. They’re able to just waltz through. Without any explanation whatsoever.

Back to Abbadon, who is dressed in Aurek’s clothes. He hops in the basket and tugs the rope and is pulled up to the top. He’s wearing a hood over his face which of course fools everyone. The guards take him back to Brody’s chamber where he meets up with Florie.

When Abbadon pulled his hood a little further back, Florie said, “It is strange…. you look like Aurek but you smell like burned rubber. Your eyes are also different and your voice does not sound like Aurek’s voice and…. your behavior is… I don’t know how I should say it. Who are you?” (page 621)

Abbadon tells her to keep quiet and Florie immediately accepts this and leads him to AstroJesus’ pad. A misspelling of the word ‘shining’ as ‘shinning’ later, guards break into Brody’s room and find him dead. They send a message to General Genarius and explain that Florie spent the night with him and also that Aurek left the city via basket and then returned. Genarius questions one of the guards, who says that when Aurek came back his voice was different and he smelled like sulfur and burnt rubber. And yet they did not find this even remotely fucking unusual. At. All.

Genarius thinks about this for about fifteen seconds and comes to the conclusion that Abbadon is posing as Aurek. He has someone saddle his horse, arms himself, and takes off for AstroJesus’ pad, at roughly the same time that Abbadon and Florie arrive. Abbadon then asks her if she knows who she is. Florie says that he’s a magician working for Abbadon. Abbadon laughs and reveals his face to her.

When Florie looked at the ‘Face of Evil’ her heart died within her and she fell down at the gate of King Astrodoulos and became stiff and cold like a stone (page 624).