Chapter Fourteen – The Eagle Has Landed 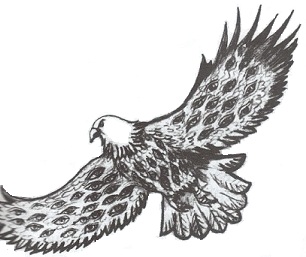 Chapter fourteen opens with actually a pretty decent picture of an eagle that is absolutely covered in eyes. I guess that’s how it sees everything. The chapter title sounds like something a Secret Service agent whispers into his collar after Marine One lands on the White House lawn, which is a little bit jarring.

Listening to Oraculus and thinking about his message was more than the teenagers could handle. They felt that this was the final end of their journey because both of them were emotionally exhausted and irrationally confused by the speech. This situation was unbearable for them and they agreed to go home.

Joey was checking out his compass for some directions that could lead them home safe and sound, as Maya made her final preparations by organizing her backpack (pages 79-80).

What’s the point of saying ‘final end’? How is it even possible to be irrationally confused, and why would you be emotionally exhausted by listening to someone talk for ten minutes? How is any of this unbearable? You can’t get directions from a compass, that’s not how a compass works. And backpacks aren’t organized, you just throw shit into them for storage, nor would anyone need to prepare by organizing a backpack. Not that Maya has anything in her backpack beside a change of clothes, anyway.

Suddenly the air splits in an explosion and the eagle, Sagitta, lands. Sagitta repeats most of what Oraculus has already told him. He adds that the ‘tunnel of time’ that will take them back to the US has already closed and it’s not going to re-open until they’ve completed their mission.

Maya looked at Joey with an astonished face, realizing that this might be ‘their calling’ and so she said, “If we are not being able to go back home to our parents because the tunnel will not open up to us until we have fulfilled our mission in the ‘Land of Maradonia’ we better listen to Sagitta” (page 81).

I’m not making any of these quotes up. And yes, this has now become their Calling.

Tesch moves on to explaining what kind of person Joey is:

Joey’s nature and his reactions in several different situations in life were basically very emotional and spontaneous but this time he was thinking (page 81).

Joey is suddenly gung ho about the entire thing, even though literally five minutes earlier he was irrationally confused and emotionally exhausted and wanted to go home. He starts talking about how there is no turning back and they have to concentrate on the future and fulfill their destiny because it’s their calling. Yes, he actually says all of that. He also says that they have now conquered the ‘Decision Test’ that Oraculus was talking about in the previous chapter. Yes, that was a very difficult test, considering the decision was made for them.

Joey also refers to the eagle as an ‘Air Taxi’, which is rather insulting and makes me want the eagle to rip his spleen out of his body, even more than I normally want a giant carnivorous bird to rip Joey’s spleen out. Which sets us up for a totally nonsensical quote to close this chapter out:

Hoppy, sitting on Joey’s shoulder looked at the eagle and said “An ‘Air Taxi’! Huh…? It looks to me more like an ‘Air Shuttle’ because there is room for a whole assembly.” (page 82).

Chapter Fifteen – On the Wings of the Eagle 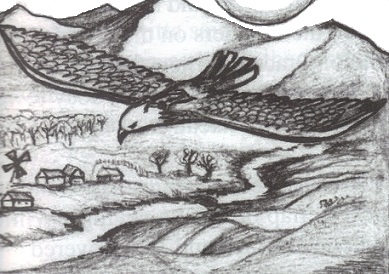 Picture of an eagle flying. On the eagle’s back are either two warts or two poorly drawn stick figures, I can’t tell which.

They climb on Sagitta and the eagle takes off. They fly. After awhile Joey looks down and wishes that he could conquer all of the mountains. Why, I have no idea, but this leads to one of the most batshit insane conversations in this entire book. I’m guessing that Tesch is trying to be very deep and meta and wise, and is failing miserably. Anyway, Sagitta says:

Joey was looking at the mountains and replied,” Mountains cannot be conquered! I did not know that, but now I understand that I must conquer myself, my hopes and my fears and by conquering them I have conquered the mountains of my own future.” (page 85).

I really don’t know why you would want to conquer your hopes. Also, if mountains cannot be conquered, how can you conquer them by conquering yourself, your hopes, and your fears?

Later, Maya falls off the eagle, but then Sagitta dives down underneath her and catches her, so no harm done. Eventually they land next to the Poseidon Rock Plateau and disembark.

Chapter Sixteen – At the Poseidon Rock

So they’re on a beach. Sagitta reminds them that they have to find twelve flint stones, as Oraculus told them, to find the entrance to the fjord. Maya and Joey look around for a bit, can’t find anything, and then realize that maybe the stones are buried under the sand. Now, they’re standing on an enormous beach. Despite this, after about ten minutes of digging with sticks they find the dozen stones.

It was exactly as Oraculus and Sagitta had mentioned it to them. With the detection of the twelve flint stones they found the fjord at the point where the three rivers merged into one (page 89).

Yes. That’s it. Not a single line about what actually happens or how this worked. Nothing. They find the stones, and the stones show them where the fjord is. That’s exactly how it happens in the book.

They hear screams and moaning coming from the Plateau, which Joey assumes is the ‘Abaddon Dude’ in prison. Right. So they’re walking along the fjord and the rocks are slippery because there’s some water – and yeah, I’ve just realized that Tesch has no fucking clue what a fjord is. I think that she thinks it’s a kind of dam that crosses a river. Anyway, Joey slips and falls into a waterfall and is carried a ways by the current. One of the doves sees him and alerts Sagitta. Considering that Sagitta can see everything in the world, I don’t know why he needs a dove to alert him. This doesn’t really instill me with confidence. But my brief hopes that Joey is going to a watery grave ends when Deus Ex Sagitta rescues Joey, minus his backpack and a shoe.

Maya runs over to Joey, who coughs up some water and asks if they passed the test. Apparently they did, because they’re on the other side of the river. Wait, that was a test? And if it was, why the hell didn’t Sagitta just fly them across the river?

This is the stupidest book I have ever read.

Maya tells Joey how happy she is that he’s alive and that it’s her fault that he almost drowned and she should have taken better care of him. Which is bullshit because she specifically told Joey to slow down and be more careful and Joey ignored her, right before he went into the drink.

Joey is worried because Hoppy is gone and he’s afraid that Hoppy drowned. But then Libertine comes flying back with Joey’s missing shoe, and inside is Hoppy.

Let me get this straight, Tesch.

I’m pretty sure this book was written on a bad acid trip.

A few minutes Sagitta comes back with Joey’s backpack that she found floating several miles downstream. So the entire incident ends with no lasting effects on any of the characters. Somehow I’m not surprised.

Chapter Seventeen – Stuck in the Jungle

Joey takes all his clothes off and spreads them out to dry, which sounds a little awkward, since he’s standing in front of his sister. He pulls out his compass and sure enough, it’s still working perfectly. I kinda think they are going to make it throughout this entire book without anything bad happening to them.

Joey mentions something in his Geography class about the directions. Apparently you can remember them by saying “Never Eat Soggy Waffles”. Which isn’t clever, because these are the cardinal directions. There are four of them. They are not that hard to remember.

Tesch thinks that Maya and Joey are suddenly ‘Poseidon Rock Conquerors’, but I’m not buying it. After a bit they head down along the river, towards the lagoon. I really don’t know why they’re not flying. If Sagitta is there to follow their every whim (and he has basically admitted that he is) why aren’t they still flying?

Well, because that’s boring. And the Plot Dictates Otherwise.

They struggle through a jungle for a bit until they get stuck. Joey pulls a kitchen knife out of his backpack. I’m guessing that this is a Mary Poppins backpack that he will just use to pull out whatever the situation calls for until the end of the book.

“Character is power, my dear sister. I have nearly every thing with me that we need” (page 98).

Like I said. Also, what the hell does that even mean?

Joey begins cutting their way free. Then some monkeys appear and start throwing coconuts at them. Then they get to the river and some crocodiles eye them hungrily. Then they run back into the jungle and they meet a giant snake. This tells them that they have arrived at the ‘Trespassing Test’, which doesn’t make sense, but I don’t really care, I just want them to die. Tesch will not oblige me, though. Instead, Joey comes up with an ingenious plan:

“Maya, let me tell you something. Do not be afraid of going slowly through this trespassing area. Be afraid of standing still!” Joey came up with a strategy which made his sister very proud of him (page 100).

I’m guessing that going slowly is the strategy, because that’s all that he says. So I guess Maya doesn’t expect much of Joey. Which kinda makes sense.

“Ok Joey, good idea. It’s so right as it could be because if we are afraid and do nothing we will be doomed. Let’s move on and conquer the test. The snake might be gone.” (page 100).

Doing nothing is frequently a very good strategy. But they go out and of course the snake isn’t gone. It’s enormous. The snake informs them that they’re only going to pass through his territory over his dead body. So Joey chops the snake’s head off with the kitchen knife.

Yes. A fourteen-year-old boy, using an ordinary kitchen butcher knife, swings it like a sword and manages to decapitate an enormous snake in a single blow.

I have nothing to say about that that you are not already saying in your head.

Joey picks a banana leaf, wraps the snake’s head in it, and sticks it into his backpack. Hoppy dubs him Joey, the snake slayer.

Also, apparently Hoppy can change colors like a chameleon.

One Response to “Part 5: Emotionally Exhausted and Irrationally Confused”