Chapter Sixty-Two – Only One Drop…

Joey checks to make sure he can open the door from the inside as well, which he can.

It was a strange feeling for the fourteen year old Joey to hold the ‘Key to the Underworld’ in his hands.

This isn’t the first time Tesch has repeated herself in consecutive paragraphs and it won’t be the last. Much has been made of the atrocious formatting and enormous font this brick has, and it’s true that it would be a lot shorter if properly done, but honestly, a good editor would actually accomplish a lot more by trimming down the repetitiveness.

In the center of the floor is a metal circle that looks like a flying circle, but the room has no other exit, and the circle doesn’t have a handle or anything. So Joey points the Deus ex Machina – I mean, the key at it, and the lid levitates straight up in the air.

Joey looked at the ultra violet glowing stick and then again to the hovering lid. “These powers, principalities and rulers have some equipment here which we don’t even have in our world!” (page 493)

I need to write Tesch a letter telling her to read her dialogue out loud, and if it sounds moronic, to delete it and try again.

This opens up a spiral staircase. Joey uses the Deus ex Machina as a flashlight and heads downstairs. There are exactly six hundred and sixty-six steps, which is Tesch’s way of being Subtle.

At the bottom is an enormous cave with a horrible stench, the smell of sulfur and burnt rubber, drums, and screams of people in agony. Five of the doors are quiet, one of them smells like animals, and one is where the screams are coming from. Joey decides to investigate. The Deus ex Machina also opens these doors. He heads inside and is only stopped when it gets too hot to continue.

Thousands of people were standing up to their shoulders in a lake of a burning substance. It smelled like cooking oil and the screaming of these people in the lake was insufferable.

This lake of fire, of course, is Hell. And the drop of water part is taken directly from the Bible, in a parable Jesus tells in Luke 16:22-24. I can picture Tesch sitting in front of her computer with her Bible sitting next to her high-fiving one of the many self-portraits she has of herself standing in front of famous monuments, tickled pink by her elite writing skills. A thought bubble above her head says… 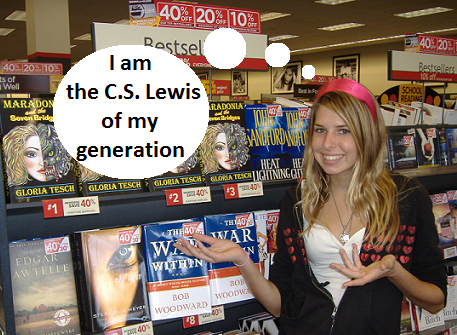 And my prose is a cross between Guy Gavriel Kay at his best and the Word of God.

Right. So the guy keeps screaming and begging for a drop of water for about a page. This moves Joey so much that he starts weeping bitterly. But it’s so hot that he can’t continue, so after a couple minutes he turns and leaves everyone to their flaming fate.

He heads into the stables but he has to wrap up the Deus ex Machina because it’s too bright. Inside there are guards sleeping and an enormous herd of unicorns. Tesch spends another paragraph about how the memory of the screaming people in the lake of cooking oil is effecting Joey. It’s slightly better-written than the previous scene, but she still doesn’t bother delving into any of the emotions involved.

Eventually he finds a fancy corral with a sign that announces it’s Fayina. Joey keeps walking around and finds the cave door which is blocked by an enormous granite door.

This granite door was at least one hundred feet in periphery and boundary (page 500).

I don’t think that word means what you think it means.

Joey goes back to Fayina and whispers in her ear which makes Fayina jump. This instantly wakes up four guards who are sleeping in the general vicinity. They run over and look around for vermin without success.

“These horses are all crazy! Let’s go back and get some sleep.” One of the keepers said.

“How many times do I have to tell you that these animals are not horses they are unicorns! Don’t you understand? They have single horns like spears.” (page 500)

Seriously, Tesch? Do you honestly think your audience doesn’t get the fact that these are fucking unicorns? Or do you seriously think that under the circumstances, a grown man in Apollyon’s army would not be able to grasp the difference between a horse and a unicorn? This is not rocket science.

Eventually the guards go back to sleep and Joey explains to Fayina who he is and why he’s there. Joey explains that the next morning Apollyon and all his commanders are taking off for the high plateau of death to inspect their troops. Anyway, Fayina needs to prepare the herd and pick thirteen unicorns to carry the mermaids. He also asks her how they’ll get through the huge round granite door. Fayina explains that it’s perfectly balanced so all you need to do is knock away a wooden block and it will roll smoothly to the side. One of the unicorns, Bronco, is strong enough to handle it.

Joey takes off and walks out past the door with the screaming people behind it:

“It is basically unbelievable that I had a glimpse of this legendary lake of fire! Thousands of people are screaming in their inner most pain for eternities from the top of their lungs for a single drop of water and I have the opportunity right now to step out of this place, go to the water park, drink all the water I can drink and take a shower under the waterfall.” (page 504).

First – again with the repetitiveness.

Second – Joey’s initial thought after seeing all these people in agony is not to try and figure out how to save them, or what he could do to ease their suffering, or even wonder how they could have gotten into such a horrible situation – it’s to privately congratulation himself on having water to drink. What a little sociopathic bastard. He is truly incapable of feeling empathy.

Joey climbs up the 666 steps, closes the lid, gets out, sticks the Deus ex Machina back into the fire, and goes back to where Maya is sleeping.

Chapter Sixty-Three – The Hour of Liberation 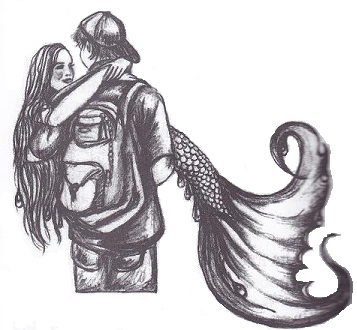 Is it just me or are they gazing longingly into each others' eyes?

I really don’t think a fourteen-year-old boy is strong enough to carry a full-grown mermaid around.

Joey tells Libertine and Aquamarisha everything, then lays down next to Maya and falls asleep. Tesch throws in a ‘and so it was’ and tells us that Apollyon takes off with pretty much everyone, leaving behind only some palace guards, the Hoodmen, and the lower servants. Essentially, perfect conditions for anyone planning a breakout. Pretty convenient that the time they chose to break in perfectly coincided with Apollyon emptying out his entire fortress, wasn’t it?

Big Bertha stays behind because she’s having Feelings that their enemies are still inside the castle and watching them. The other ravens give her shit and then take off. Bertha is miffed:

“Nobody believes me. Why should I tell them that I saw footprints in the snow and that I have a strong feeling that the enemy is watching us in our own four walls in the kingdom hall and in the cloister?” (page 509)

Hmm. Why should you tell someone? Oh, right, because if you don’t whoever it is might do something to harm your sworn master, or possibly even kill you. Good enough reason?

The day passes quietly. The mermaids frolic to keep the guards relaxed, and Maya and Joey stay hidden. Bertha flies around and thinks paranoid thoughts but eventually convinces herself it’s all in her head.

Eventually the time comes. Joey pulls the severed snake head out of his backpack and sets it down next to the fireplace, reaches in and grabs the Deus ex Machina. He opens the door and heads back to help Aquamarisha and all the mermaids from the pool over to the door. He notices that they’re leaving quite the trail of water behind him but that can’t be helped, so he closes the door behind them.

Maya and Joey had to calm them down, especially Marabou who was talking like a waterfall and could not stop. Maya became angry with her and said, “Marabou, stop talking you have the ‘diarrhea of words’. You have to listen very carefully to us because this is a difficult mission and not an entertainment trip.”

“How exciting!” Marabou said but she didn’t stop talking.

Queen Aquamarisha had to hit her finally with the flat hand on her cheek. Joey laughed and said, “Bitch slap!” (pages 512-513)

I’m just going to let that one stand on its own merits, shall I?

Joey opens the door, revealing the staircase. He explains to the mermaids that they’ll slide down on the railing. Now, I’m pretty certain this wouldn’t work very well. Even if the mermaids could curve their tails so it would be like a human sitting sideways on a railing, we’re still talking about slippery fish scales and mermaids who aren’t used to balancing on things. Naturally, it works perfectly, except with Marabou who bitches all the way down and at the end falls off and injures her arm.

They pass by the door that leads to Hell and the mermaids are intrigued. Joey explains what is down there and Aquamarisha wants to see it. Joey tries to talk her out of it by saying that it’s a horrible sight and will scar their minds. Personally, I would have used the foolproof argument that they’re in the middle of a dangerous escape mission, not a sightseeing expedition. You know, what you just got through explaining to Marabou? Naturally, Joey relents and they head down the hall until the heat gets too intense. The mermaids then freak out because the heat dries out their tails and their scales start falling off and they begin screaming in pain. Dumbasses.

They lead the mermaids inside to where the unicorns are being kept. Conveniently, there are a couple of pools down there. The mermaids jump in to sooth their burns. Fortunately, none of this noise wakes up the guards, even though four of them instantly woke up when one of the unicorns jumped the night before.

Maya and Joey sneak up to Fayina and briefly run over the game plan, which takes up two pages. Eventually they get back to the mermaids and Marabou keeps prattling on about how much fun all this. Maya and Joey are not pleased:

“This escape from the kingdom of darkness is not a sightseeing tour. It is bitter serious and it is a matter of life and death.”

They seriously need to just put her out of her misery. And no, I don’t know what bitter serious means. And no, Tesch doesn’t know the difference between your and you’re.