Occasionally, if I’m really tired, I briefly wonder if all of these names have some sort of deeper, hidden meaning, like some sort of special significance that would allow an attentive reader to figure out events later in the book, or possibly just being some sort of inside joke from the author. Then I remember that this book is written by Gloria Tesch and it’s because she’s not creative enough to come up with her own names.

Maya and Joey head over to a glitter tree, which still makes me roll my eyes. And just past the glitter tree is an enormous silver metal wall. It’s the kind of thing that’s very noticeable. Even more noticeable than a glitter tree. How did they not see this?

They did not see the end of it as far as they could see.

Yes, those are two consecutive sentences. And yes, she did use ‘there’, not ‘their’.

They talk for a bit about really obvious things. Like that the wall is really big and it’s in their way. Joey is immature and hits it with his knife, which sounds both dangerous and like a good way to damage your knife.

Maya says that if Sagitta was here she could carry them over the wall. Which sounds like a really good idea. What was that quote again?

“I am ordered to help you at all times!” Sagitta replied (page 87).

Really, Tesch? You couldn’t think of a better reason? The damn eagle is all-seeing, it’s like a personal Deus ex Machina, there is no reason for it to not be here to carry them over the wall. Or to simply fly them all the way to the lagoon. And it’s not even that hard to come up with a good reason to get rid of her, if you want your heroes to struggle for a bit. Have Sagitta say that she has to leave to battle the feared one-eyed demon of Sta’nek and she’ll be back in a week. Boom, problem solved. This is not rocket science.

Maya and Joey talk about whether the fairies are behind all of this, and then we get this:

Hopelessness was visible on their faces including Hoppy’s, because Hoppy found out that touching the wall created temporary blindness in his eyes (page 123).

Yeah. No, this blindness is not significant and doesn’t affect the story. At all. Also, grasshopper expressions don’t change that much. In my experience.

Maya begins talking about how Sagitta has inner eyes. And what that means. I really hate it when Tesch tries to get philosophical. It’s like reading the diary of someone addicted to crystal meth.

“We have to concentrate on our own inner mind because there is no security in the world.” (page 124)

What the fuck does that even mean?

Maya continues rambling about how if Sagitta and the doves come to help them out they will miss the opportunity because they always expect help from the outside. And if they keep having other people bail them out they will never learn to rely on themselves. Which actually does kind’ve make sense, and would be a valid point, if Tesch had just written that instead of trying to transcend the English language.

“Joey, we will overcome this wall by concentrating on our inner power, our inner strength and master this situation as hopeless as it seems.” Maya said.

Yeah, that’s right. A Narnian grasshopper’s favorite song is a popular protest song steeped in religious history from the 1950’s. In America. Somehow this seems a little…anachronistic.

And I suddenly start liking Maya quite a bit more. Hopefully she says that more often in the pages to come.

Hoppy was still peaking but finally closed his eyes and said “The man who wants to lead the orchestra must turn his back on the crowd.” (page 126)

While this is true, it’s not really related to what they’re doing. And how would Hoppy know this quote? And what is peaking?

Suddenly Maya gets an idea. She gets up and screams that she knows what to do. I don’t know why she’s screaming. But her grand plan is to go under the wall. Well. That was a difficult one. You basically have three choices, go around, go over, and go under, and the first two sound a little time-consuming.

They find a soft sandy spot. The wall doesn’t go down into the ground so it’s not too terribly difficult to dig a hole underneath and get through.

The picture on the front of this chapter is the two-faced chick from the front cover of the book. I have no idea if this is going to be significant.

Libertine then said, “It is good that you know where you are going because if a person does not know what direction he has to go, any wind is the right wind for him” (page 129).

Except they don’t know where they’re going. Libertine warns them about fairies. They come in various forms and are deceptive and stuff. Some are invisible. And they have powers. And Tesch still doesn’t know the difference between there and their. And then Libertine is interrupted by music. 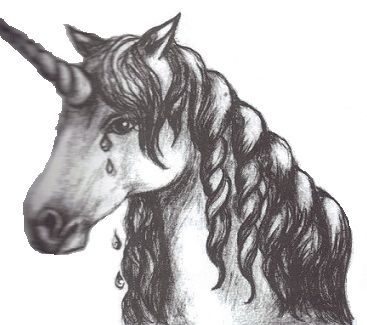 And as we all know, unicorn tears turn into jelly beans!

Some wagons come up. They’re being pulled by six unicorns. And Maya and Joey love unicorns. How do you love something that doesn’t exist? Although there are plenty of people in love with Edward Cullen. So…never mind.

Maya notices the unicorns have tears in their eyes. And then Tesch goes into a long description of these young girls singing and wearing pretty dresses and making music and stuff. The music is entrancing. Maya and Joey become Happy. Joey gets on a wagon and it’s like a toy store. Joey is smitten.

The girls start talking to them about how they’ve been through a lot and they should stay here and hang out with them and achieve True Happiness and all their cares and worries will disappear forever and they’ll be one big happy family and have multiple orgasms every day. Okay, not the last part, but it’s sort’ve implied.

The flowers are like a narcotic. Yeah, it’s explicitly said. I can just imagine young children setting this book down and saying “Mommy, what’s a narcotic?” Except that nobody is actually reading this book. Except for me. For some reason.

Maya looks in her wagon and sees three different cell phones, a computer, tons of clothes, concert tickets, jewels…all sorts of stuff. Then she goes down to the crying unicorns and asks them why they’re crying. The unicorns say they’re not allowed to answer. Maya feels more and more drugged but realizes that something is wrong.

Maya got so weak from the inhalation of the fragrance that she nearly passed out. She held herself upright on the holster of the unicorns (page 138).

Some of the musicians try to load Maya into the wagon but her hand has locked onto the holster and they can’t pull her loose.

The Commander said sternly, “Break the fingers of her hand or break the whole hand off and then throw her body on the wagon!”

It was like a ‘Blitz Action’ which hit the mind of Joey. “What was that? What did you say?” asked Joey. “Break her fingers or break her hand off and through her body on the wagon? You don’t do that to my sister Maya.” (page 139).

Joey leaps down, whips out his knife, and tells everyone to back off. He launches into a monologue about how he knows who they are and that they’re evil. I guess it’s for the benefit of the reader because no one in the actual scene needs to know what he says. Maya wakes up and agrees with him. Literally:

“I’ll also tell you something,” said Maya. “My brother Joey is right with every word he said about you!

You should know that we have to fulfill a mission.

Our mission provides us with a vision and having a vision is the art of seeing things invisible.” (page 140).

Actually, it isn’t, but whatever.

As Maya and Joey are about to leave, a voice introduces herself as Gertrude and says they are worms. Ah, Gertrude. It reminds me of a slightly shriveled librarian. Not overly intimidating. Then Gertrude makes a giant wall of fire appear in front of them. Slightly more intimidating. Although, why didn’t she just make the wall of fire appear under them? I think that would solve this problem once and for all.

I guess maybe they want Maya and Joey for some nefarious purpose, so they need to capture them alive.

“We will crush you once and for all and then we will burn your bodies with fire and blow your ashes into all the four directions of the wind!” Gertrude said (page 142).

Maya tells Joey to concentrate on his inner strength and ignore Gertrude. Joey points out that there’s a sheet of flame in front of them.

Then Maya said, “I tell you that this fire wall is only an illusion and we’re going to walk right through it. Even the smell of fire will not be on us. Not one single hair on our heads will have the scent of fire.” (page 142).

I’m getting a strong Biblical fiery furnace vibe from this.

They link hands and leap through the wall of fire and are fine. Then Gertrude repeats her threat, so they start getting worried again. But suddenly Deus ex Sagitta swoops down and brings her friend ‘Cato’. Cato has a mighty thunder and lightning hammer. Okay then. Henceforth, Cato shall be known as Thor

Sagitta tells Gertrude to free the unicorns and piss off or Thor will kick all of their asses. Gertrude agrees, frees the unicorns, and all the fairies vanish. Sagitta and Thor leave, and the unicorns start prancing around happily. And Maya and Joey are shining. Because they’re reflecting the presence of light that Sagitta and Thor brought with them. Or something.

Libertine flies down and starts monologuing. Again. She talks about how they’ve reached a higher level of understanding and conquered another test and their hands are anointed and they’re going to become mighty leaders and so on and so forth. And then this:

“We must hurry because Abbadon will be free from the pit of his prison shortly.” (page 146).

This raises a couple questions for me.

First, are they freeing Abaddon? Because if they are, why? This is stupid.

Second, if Abaddon is escaping, and they know he’s escaping, why don’t they stop him? This is stupid.

Third, if it’s been prophesied that he will be freed, why don’t they use the prophecy to keep that from happening? Isn’t that the general idea? This is stupid.