Chapter Fourty – The Secret of Livius

Yes. That is Chapter Fourty. Not Chapter Forty. And this isn’t a one-time typo, either – chapters forty through forty-nine are all spelled this way. This book parodies itself.

AstroJesus keeps expositing about how Maya and Joey are going to be huge targets of Abbadon because he doesn’t want them encouraging the Maradonians. Honestly, I’m not certain why Abbadon is so worried. Haven’t we heard about how they are horribly outnumbered? Why doesn’t Abbadon just swoop in and slaughter everyone anyway?

Joey mentions that ever since he and Maya were almost barbecued, neither of them are afraid of death. So, that traumatic near-death experience actually had some effect on them? I’m shocked. They seemed to get over it so quickly.

AstroJesus, however, points out that every time they’ve been in trouble, someone came to help them out. This instantly makes AstroJesus my favorite character in the book. FINALLY someone is pointing out that Maya and Joey haven’t actually accomplished jack shit so far, they’ve just been lucky enough to have people around to bail them out.

Unfortunately, AstroJesus doesn’t point this out in as many words, he just keeps talking about how they need to protect Maya and Joey. I want to keep liking AstroJesus, as characters who call the MC’s on their bullshit are rare, so I came up with an explanation for this: Let’s assume AstroJesus knows Maya and Joey are worthless, however, he does know that everyone thinks they’re the cat’s pajamas because of the prophecy. Therefore, he has a vested interest in keeping them alive, if only to ruthlessly exploit them to keep the ignorant masses happy and boost military recruitment.

AstroJesus explains that blood is going to keep them safe. Drink for another Christian reference. He launches into a story about how King Roach threw Apollyon’s palace into an ocean, and the ocean turned red like blood. Apparently, if you bathe in this pool it will give you protection from the powers of darkness.

AstroJesus rambles for a bit and shares a couple Important Life Lessons with them, and mentions that he meditates and connects with the supernatural world and that’s how he knows all sorts of things. Eventually he gets back on topic and orders all of his servants out except for just the two of them. AstroJesus then explains that he took a dip in the pool of blood and came out and stood around to let it dry. But afterwards he realized there was a leaf stuck to his shoulder and it hadn’t been covered with the blood – and you can’t take a dip twice. So now he has this small patch on his shoulder that is unprotected and vulnerable to attack.

First – how much of a moron do you have to be to not notice something like that?

Second – maybe I should change his name to AchillesJesus. No….doesn’t have the same ring to it.

Joey wants to take all their men with them so everyone can be protected. AstroJesus agrees but says that everyone will have to be blindfolded so the location remains a secret. I’m having a hard time buying this. You’re talking about an ocean of water that is big enough to have an entire palace thrown into it. Just for good measure, it’s also blood red. It’s difficult to hide something like that. And for that matter, shouldn’t AstroJesus have been taking small groups of blindfolded soldiers up there to take a dip for the past few years? After all, he needs every advantage he can get, right? Doesn’t he care about his men’s lives? What an asshole!

AstroJesus calls in all his men, including “Lieutenant Commander General Genarius”. I’m not an expert on the exact rules of military titles, but something about that one seems off. Maybe it’s the fact that Google tells me the name Genarius is stolen from Star Wars

. Anyway, he gives orders for the Maya and Joey story to be created and tells them that Genarius is his Number One and can be trusted completely in all things.

Maya and Joey walk past the unicorns, who are nervous because they feel vibrations in the air? Why? It’s not explained.

Everyone talks about nothing for awhile, and speaking of nothing, this reminds me of Hoppy. Where the hell did he go? He hasn’t been mentioned in some time. Tesch needs to stop forgetting about characters she’s created.

Eventually Joey gets up and explains that they’re going to go bathe in the special pool. Some of their men are unbelieving. Joey explains that nobody is obligated to follow them and take a dip, every man can make his own choice as to whether he wants to come. Everyone except for thirteen men decide to come. They’re morons, of course. What harm is there in going, as long as you let someone else go first to make sure it’s not acid? If it doesn’t work, you’re no worse off than you were before. But thirteen of them decide to stay behind and trust in their own strength.

“Okay than, it’s your funeral.” said Maya as she rode off with Joey in the state carriage (page 310).

They really need to lose the snarkiness. And Tesch really needs to learn the difference between ‘than’ and ‘then’. Or at least hire an editor.

Maya and Joey meet up with Judge Kingston, who is…a judge. Anyway, the judge has been tapped to write the Maya and Joey story. Why him? No idea. He calls in a couple of scribes and Maya and Joey recount the story – fortunately, Tesch doesn’t tell it again. Naturally, the scribes are rather astonished and don’t really believe most of it. So Kingston gives them his opinion, in the king of all run-on sentences:

“Of course the whole story has also another aspect of truth because the King had sent the seven doves, which are the seven good spirits of the ‘Land of Maradonia’ to lead Maya and Joey from their world into our world and they helped them on their way to come to us and to encourage our people who live in fear even though King Astrodoulos is teaching twice a week in City Hall and is telling everyone to believe in his own future and that the people in this country need a new vision because without a vision the people will be lost” (page 313).

I feel like emailing Gloria Tesch a bunch of periods and telling her to use them.

The clerks finish up and then ask Maya and Joey to add a special note and signature of their own. So Maya and Joey think for a bit and then write. This annoys me. Two separate people cannot think and write the same thing simultaneously. They would have to discuss what they wanted to write and then one of them would write it down. It’s small but it’s irritating. Although not as irritating as what they write:

Not sure what this means. Maybe they mean ‘belittle’. Probably not, though. Unfortunately people can’t change their size. I kinda get what they’re trying to say, but there are about 117 ways they could better phrase this. 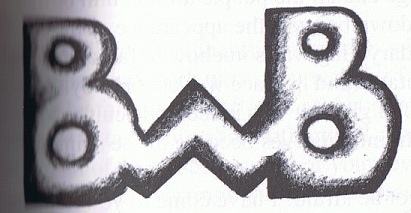 Not the Brotherhood Without Banners. Sorry.

I think our Apollyon’s Club of Evil t-shirt needs to have this on the sleeve or something.

AstroJesus meets up with everyone before they head off to the Magic Pool and gives them a pep talk. He mentions a few times that Lieutenant Commander General Genarius is going to be his successor, which seems to be on shaky legal grounds, but who knows, maybe in ‘Maradonia’ the king gets to appoint his successor if he doesn’t have any children?

AstroJesus shares several pages of fortune-cookie wisdom and eventually gets back to the Magic Pool. They’re going to have everyone strip naked, leap in, sink down to the bottom, get out, and then stand around and not move until the liquid dries onto their bodies. Why? I don’t know. I’m pretty sure he doesn’t mean that they have to leave the liquid crusted on their bodies for the rest of their lives, so why doesn’t the magic liquid just…protect you? Why do you need it to dry on you? Also, wouldn’t this method mean that the soles of their feet would be unprotected? If you have to let it dry on you, it wouldn’t take more than a few seconds of standing on dry land before the water drains off the bottom of your feet.

Clearly, I’m thinking about this far too logically.

AstroJesus explains that as soon as Genarius blows the trumpet, it’s safe to get dressed again:

“King Astrodoulos! What is a ‘BBM’?” Maya asked.

So…what is it? BBM, BWB, or BWBM? These are important questions. You can’t just random give out absolutely retarded acronyms like that. Well….I guess Jesus can. 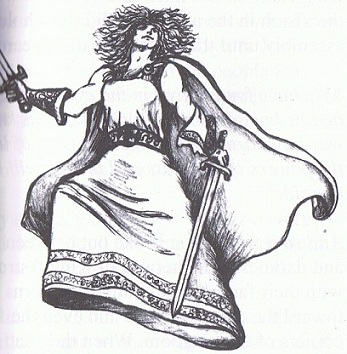 This is supposed to be a man.

So a man who looks like a girl appears in midair, which means that some people were looking right up his robe.

The flying thing holds out his swords over everyone and AstroJesus explains that this means they’ve found favor in the eyes of King Roach. Hooray!

We then cut to omniscient narrator. The story of Maya and Joey goes out and people are ecstatic. Men are signing up for the military left and right, without even saying goodbye to their families. They are that inspired.

A ‘hysteria’ broke out, especially under the young children and women who ran out of their houses to the streets and to the market places and screamed for hours, “Long live Maya and Joey, ‘The Encouragers’!” The boys yelled “Maya!” The girls screamed “Joey!” (page 323).

This is remarkably creepy, considering that they are fifteen and fourteen, respectively. Then again, considering how many girls go moist for Justin Bieber, I guess it’s not terribly surprising. Still, I can’t help feeling like I’m reading about Gloria Tesch’s personal fantasy of being wildly famous and beloved by everyone.

Anyway. Bottom line is they have more recruits then they know what to do with.