Maya and Joey are walking, as they are wont to do, and Joey reacts to something off-screen, as he is wont to do, and there’s a weird sound effect like someone flicking the microphone, which may or may not have been intentional, and bam! There’s an old man with a snake-head staff standing in center frame. Did he just appear out of thin air? Is he hovering above the ground? We have no idea. 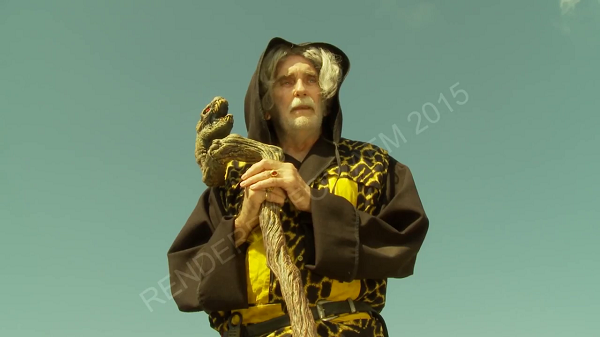 This is the Wizard Oraculus. Oraculus, as you might remember from the original sporking, was a prophesying frog. When they re-released the series, he was a frog that suddenly turned into an Elf. And now he’s a wizard, because they need to keep kicking his powers up a few notches.

Also, he’s wearing black cloak with a leopard-print vest over it, and it looks about as ridiculous as it sounds.

Oraculus orates over our oddly enraptured heroes about how a couple visitors from a foreign world would come help the people of Maradonia fight against Apollyon. He’s referring to them in the third person, so he’s not actually addressing Maya and Joey. I really want Joey to say something like “So who are these two assholes, and when can we meet them?”

Oraculus abruptly finishes his sermon and tells Maya and Joey they “must be famished”. No, they brought apples.

Cut forward and Oraculus uses his wizard’s staff to light a CGI fire.

They sit down and while Arabella watches through the bushes doing her best Crazy Eyes impression, Oraculus explains he’s a wizard and he’s been ordered to accompany and protect them on their journey, because the Powers of Light ordered him to protect them. He picks up his glass of wine, takes a long sip, and then takes an equally long pause while nothing happens, which makes me wonder if there will ever be a shot in this movie that isn’t a camera directly in front of someone, shooting them head-on.

My wish is immediately answered when we get this blurry shot of Joey reacting to seeing Arabella in the bushes: 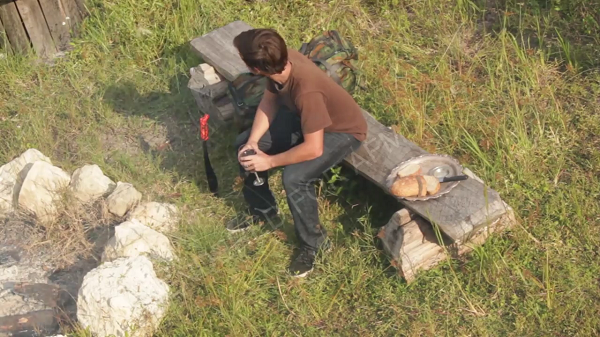 Well. You left her. You’ve been walking at a pretty slow meandering pace. How did she find you? Let’s turn to our friendly wizard, dropping knowledge like it’s hot:

“Arabella has followed you.”

God, I love the writing in this movie.

Oraculus says “there’s no time for that” – it’s not clear what “that” means – and to get their things and go. They take off, and in a stunning demonstration of basic continuity, we see a couple of blurry horsemen riding across screen a few moments later. Which is honestly pretty impressive. They managed to:

but they couldn’t manage to spend five seconds focusing the camera before filming. 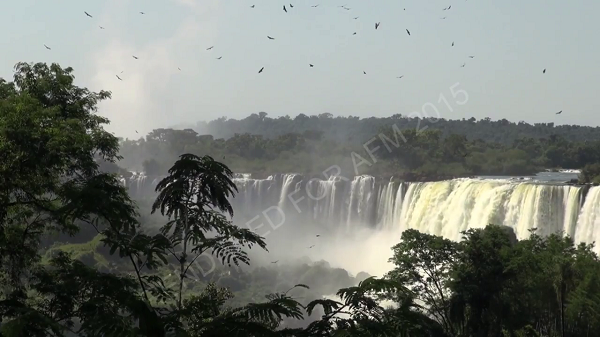 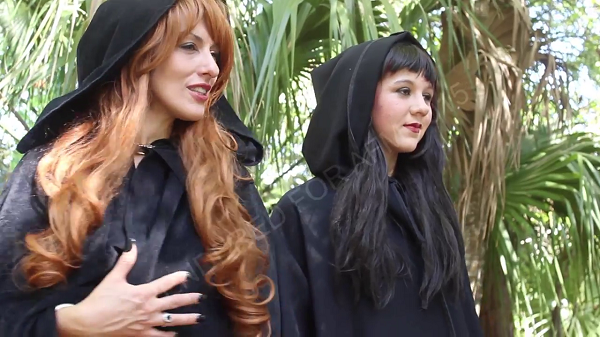 Here’s how I imagine how this went down immediately before shooting this scene:

Gerry: “Hello girls, have either if you ever acted before in anything in your life?”

Gerry: “I’m talking anything. School play. Fucking around with your dad’s video camera. Standing silently in your church’s nativity scene at Christmas. Have you ever stood in front of a group of people for any reason and said words that they listened to?”

These two characters exposit about how they’re not Evil, Maya and Joey are their friends, and they’ve seen how they dealt with Arabella. As they exposit, we cut back to our heroes, and it’s extremely obvious that these were shot at completely different times of day because the lighting is totally different. The younger evil fairy, who has a very noticeable lisp, says that they should “danthe and thing together”.

Then, it what is clearly a completely different shot, another chipper young girl comes up and offers a bottle for Maya to sniff. She sniffs it, because when some characters who are obviously evil do everything short of ask you if it smells like chloroform, you take a huff. She immediately keels over backward out of shot and we see skulls spinning randomly while an evil voice laughs maniacally.

Joey drops to his knees and starts shaking her and shouting “Maya!” and hyperventilating. He turns to the new fairy and shouts “What did you do to her?” What the hell do you think?

After a minute Maya recovers and gets back on her feet with no lasting side effects. So….I’m not really sure what the point of that whole scene was.

Oraculus accuses the new fairy of drugging Maya. Well, obviously. He continues: “We are not of your world, your music or your songs.” I think you could have just stuck with not being of their world. He calls them liars and said they just came to…

He struggles; glances off screen,

Shudders, as if he is having a heart attack,

The main fairy is insulted, and reiterates that “We come in peace!”

And then we get this scene, which pretty much defies any attempt to describe it, so let me just show it:

As they finish their extremely threatening speech, shitty CGI fire appears…well, mostly above and behind Maya and Joey and Oraculus, presumably because the effects team didn’t know how to make fire appear in the shot, rather than on top of the shot. Our heroes stop cold because they’ve been told CGI fire would appear in front of them, when obviously they could just keep walking and be completely fine.

We cut around to the other side and this time fire appears in front of them since it’s easy to add CGI flames in the foreground of video. Normally, I’d wonder why they didn’t just use this shot, since it looks so much better than the other one, but…Tesch.

Maya tells the others to concentrate on their inner strength and not give in, and Joey rightfully points out that he can feel the actual heat of the flames. Oraculus, however, explains it’s just an illusion – presumably one that gives off heat, as illusions frequently do – and they can walk through it without being harmed. So that is what they do. Whew! Good thing they haven’t had to face any actual conflicts yet!

Side note: we just passed the halfway mark in this film.

Maya turns to Joey to summarize what just happened for us:

“Wow. Oraculus was right. The fairies are gone, and the whole wall was just an illusion.”

These are the most ineffectual villains I have ever seen. They throw up an illusion of a fire that doesn’t do anything, and then when it doesn’t work, they just leave?

Our heroes press on until they come to a small village, where they are greeted by a young woman with body paint, wielding a katana, who tells them they aren’t welcome there. Naturally, this Amazonian warrior doesn’t confront them until they are two feet away from the hut, because this ragtag group of freedom fighters has survived against the oppressive regime of Apollyon’s Club of Evil by not posting any guards whatsoever. 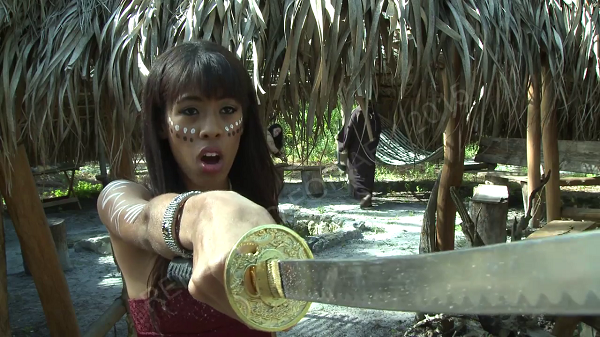 Oraculus explains they’ve come in peace, which sort’ve convinces her, so she lowers the sword and growls “I will be watching you!” while giving Joey a death glare. We get a few more quips from Joey, who continues to be a sarcastic asshole in all the best ways. It’s pretty clear the Tesches told him to just improvise as much as he wanted and he ran with it. As Joey picks up his machete, he says “Just going to pick this up…nice and slow…it’s a nice fireplace you have here!” He sizes up the katana-wielding Amazonian’s abs and comments: “You’re fit!”

That Joey. Such a smooth-talker.

The villagers whisper in a made-up language about how our heroes may be spies. The chief walks up to someone slicing bread and asks if they have guests. She gives him a disgusted look and says “I’ll bring the nourishment” because that’s how people talk.

Maya comments that there aren’t any children around. An elderly man explains they do have children, but they’re hiding in the forest. 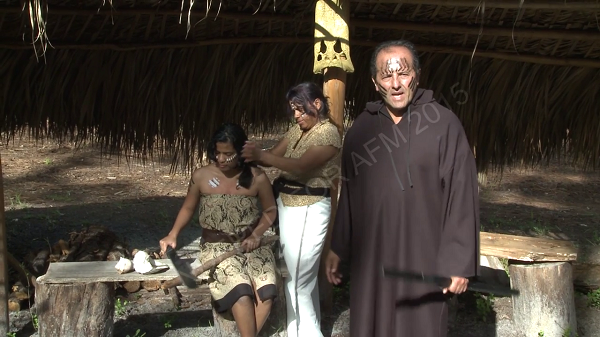 The older guy takes them to “the elder” who greets them with the traditional Maradonian greeting of…putting leis on them, while the Amazonian trailer trash guards glare at them from behind. 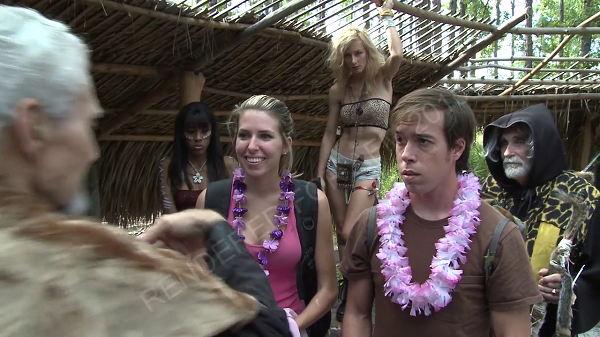 We get a few shots of bad guys lurking as they sit down to discuss what is going on. The Elder asks about them, so Maya introduces them, and then talks about their trip through the cave, while we get mercifully short flashbacks to the cave, the bad guys, and the CGI firewall.

The Elder is excited because “The Encouragers” have arrived, so he bows to them and then all six of the villagers in the shot bow. The Elder dispatches some woman to go to the valley and tell the leaders what happened.

A different old guy – with a pronounced Indian accent, unlike the accents the rest of the villagers use – says Maya and Joey are there to lead their army. Joey scoffs and points out there isn’t an army, and all he sees is women and old men. Which, in his defense, we’ve seen about eight people so far. And not in his defense, all the women have been armed with samurai swords. But we do get my favorite scene so far in this movie: the Maya-on-Joey bitchslap:

Maya tells him that he’s “terribly rude” and demands he apologize or he’s “going down”. For the briefest of moments I was hoping for another poorly choreographed slap fight, but between siblings this time, until Joey sarcastically apologizes and makes it pretty clear that he doesn’t mean a word of it.

The Elder explains that every year King Apollyon’s men come and steal their children, so they hide them in the woods, and now they have an army of 300 waiting for them; presumably clad only in leather underwear while sporting six-pack abs. In fact, these delusional villagers think that Maya and Joey, despite lacking every possible quality that one would ever want in literally any human you would ask to complete literally any task, should be the commanders of the army.

“What do you think?” he concludes. Without missing a beat, Maya immediately agrees, even though they don’t have any reason to trust these people. Then, after she’s already agreed, she turns and asks Oraculus what he thinks. Oraculus says it’s their destiny to fight the Evil Powers, so that is that. The Elder orders to villagers to give them provisions and send them off to Lake Lagoon. He mentions Commander Justin might not like their decision, but he’ll have to obey.

After a few shots of a masked individual hiding behind a tree and someone sharpening a machete with a rock, our heroes reappear, decked out in Maradonian clothes that look completely unlike everything these villagers were wearing and would have on hand. Maya has been given a golden circlet to wear as a crown, while Joey has been given fuck-all. 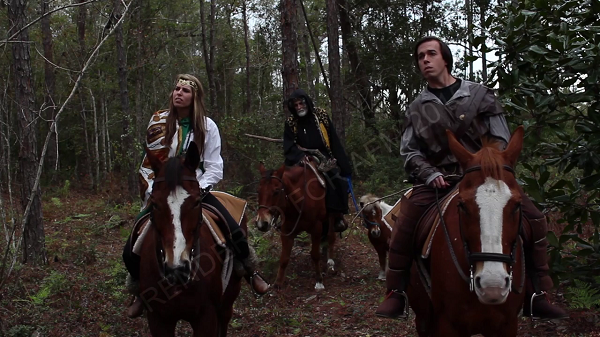 They pause briefly so Maya can say while staring off-screen at (presumably) a flag: “Wow! I didn’t know the army of Maradonia had a symbol with seven white doves on its flag.”

No shit? Could that be because they haven’t been to Maradonia before?

Joey has the perfect response, however: “Well, maybe it’s the emblem of Maradonia.”

I mean, I guess it could be…fortunately, Oraculus steps in to drop some knowledge:

Now that we’ve settled on what the characters think about a flag we haven’t seen, we cut to a new scene of our heroes walking across a well-manicured lawn, probably because they weren’t able to afford the horses any longer.