Our heroes walk up to some people awkwardly standing around an incredibly shitty flag, and a chubby black teenager with a sword, cloak, and arrestingly designed tunic steps out to glare at them: 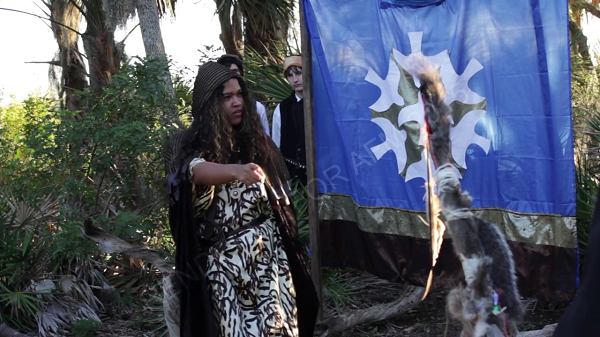 She asks them if they are Maya and Joey, and bursts out into laughter. She says she didn’t expect some “kids” and an “old bonehead” – clearly referring to Oraculus. She turns to spit in disgust and it’s pretty clear that this is the first time the actress has ever spat in her life, because she fucks it up and has to wipe her mouth with the back of her hand before she turns back around.

The chubby black teenager points out that a boy and girl can’t do the job of a commander, then raises her fist dramatically and shouts “FOR I AM A COMMANDER!” First of all, to paraphrase Tywin Lannister, anyone who needs to declare themselves a commander is no true commander. Second of all, this would be a lot more convincing coming from someone who is obviously a teenager, and, quite honestly, looks young than both Maya and Joey. They were able to cast actual adults in other roles in this movie, including a few who actually looked mildly physically impressive, what happened here?

Anyway, after her dramatic moment we cut back, and for once, Joey’s acting really shines through and illustrates exactly what we’re all thinking: 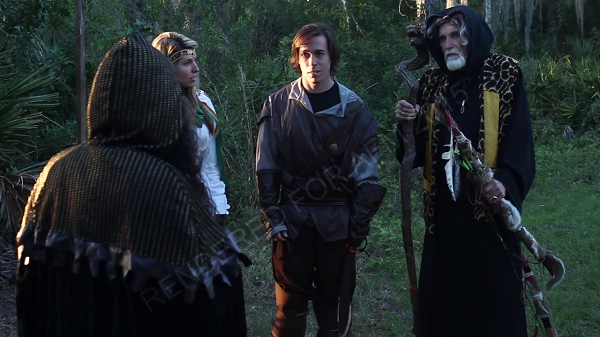 This teenager (who doesn’t introduce herself, and will not be fully named until moments before her death, spoiler alert) is Commander Justin from the books, who is renamed “Commander Justine” in the end credits, although Joey refers to her as Justin in the film.

Justine says they are welcome and that most of her people are still in the forest. We see a shot that has five random people awkwardly standing around to illustrate this. 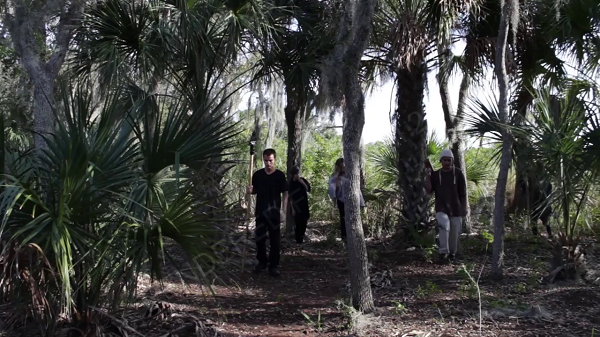 Look, Tesch, if you have no budget, you can just have her say her people are off in the forest. We’ll believe you. Showing us that you can’t afford more than five extras just makes your movie look shittier.

Justine says when the rest of her people arrive, maybe Maya and Joey could tell them some of their stories…because apparently they have stories to tell? This is news to me. But we immediately cut to a bunch of kids sitting around looking extremely bored, and Maya gets up to give a big speech:

“First of all, you should know we are not from your world, we were basically led into your world by higher powers.”

And that’s the end of the speech. We get a quick, poorly framed shot of Commander Justine meandering from screen right to screen left, then back to the bored kids, and Joey steps up and congratulates Maya on how excited everyone is. For once, he doesn’t sound sarcastic, so I assume there was a missing shot where everyone was enthusiastically cheering for the Encouragers and it didn’t make it in.

Maya pulls Joey aside and says that not everyone was excited – Commander Justine left before she even finished her speech! Holy fuck! And considering the speech was one sentence and lasted for exactly eight seconds – I timed it – that actually would be noticeable.

We cut over to Commander Justine who is walking back and forth in what sounds like a wind tunnel. It’s a little hard to hear what she’s saying, because the Tesches have never heard of ADR, or just getting the microphone out of the wind, but it seems that she is not sure Maya and Joey are who they say they are, and she’s going to call up the spirit of her dead father, Kerry.

We cut to her consulting who I assume is supposed to be the medium. Justine explains that he should call her father’s spirit – her father, who was the leader of the Black Tribe. Uh….okay. I’m not touching that with a ten foot pole. 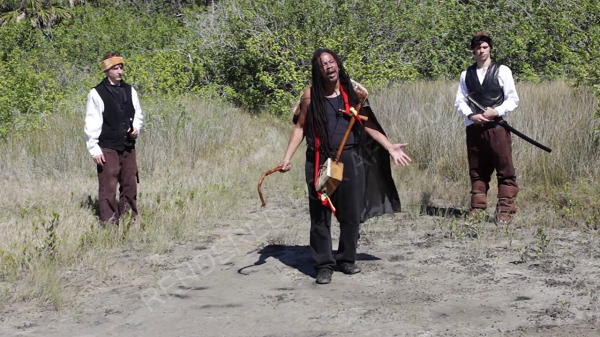 Justine and the medium have a brief conversation, which is pretty hard to decipher since they’re filming on a windy beach, and the horrendous sound quality is only exacerbated by the fact that there’s fucking music playing over this scene like there is in every goddamn scene in this fucking movie. The long and short of it is that he’s worried because King Astrodoulos has banned witchcraft but Justine swears that nothing bad will happen and if it does, it should happen to her.

The medium starts dancing and playing his instrument and calling the spirit of Kerry to come forth and we get shitty CGI flame effects. 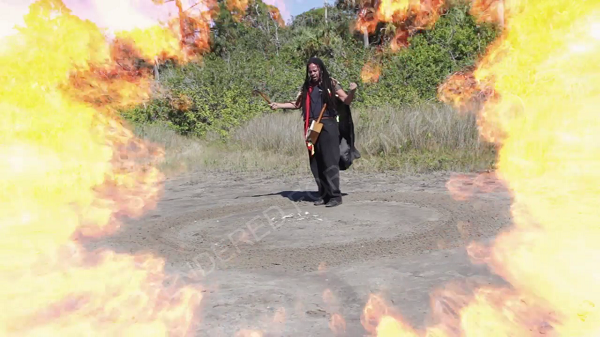 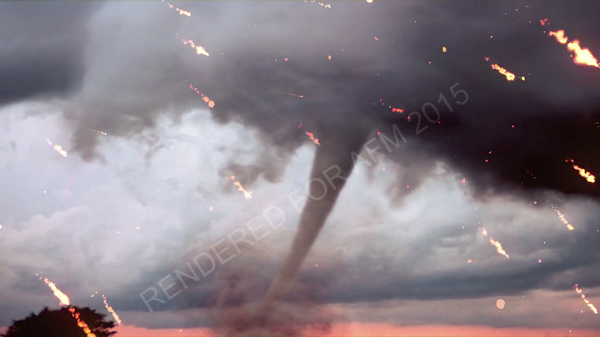 More stock footage, then a hand slowly comes up from beneath the camera with a little bit of sand on two knuckles, and then….Kerry shows up. 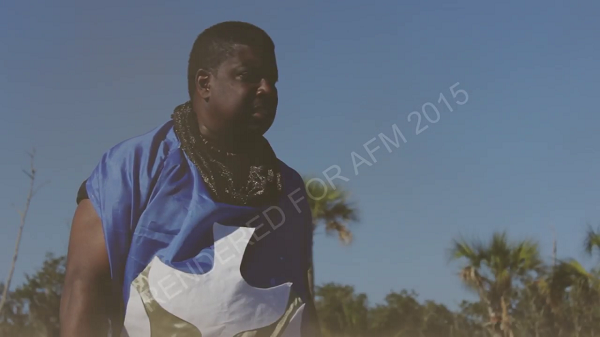 Kerry explains that she never listened to what he told her, and because of that, her command will be taken away from her, and at this time the next day, she’d be with him. As I explained in the spork of the book, this scene is just plagiarized from the story of Saul in the Bible.

In the next scene, Justine cuts open a mango and uses a small vial to pour poison into it, while expositing – out loud – that this will silence her rivals forever. We then cut over to Joey who is chilling out against a tree. Libertine (in her human form) taps him on the shoulder and warns him that the Commander will try to poison them. You know, I really love how having all-knowing, magical angels on your side removes any tension from this movie.

Justine offers Maya the mango, but Joey runs up and grabs it and says not to eat it. Maya yells at him, saying this is no way to earn the respect of the people, but Joey shoves it back into Justine’s hand and tells her to eat it. He mutters something else under his breath that can’t really be heard because the audio quality is garbage. I *think* it’s about how he suspects her of wanting to murder them.

At any rate, Justine laughs, and says if they don’t want to accept her hospitality that’s fine, nonchalantly flings the mango away into the underbrush, and saunters off to plan out how she’ll dispose of them once and for all.

Wait. Sorry. That’s how anyone normal would react. Instead she takes a bite of the poisoned fruit, dramatically says that she now realizes what her father meant when he said she’d be joining him shortly, and dramatically falls over dead.

Just so we’re really clear on what happened, we then get a shot of two of Justine’s lackeys examining the bottle of poison and revealing that it’s “Jungle Poison”. You know. Jungle Poison. The poison of the jungle.

Next scene, we see a cloaked and hooded figure approaching King Apollyon’s castle. It’s the exact same scene that’s been recycled from earlier in the film. Zero budget filmmaking! Inside, Gertrude reports to Apollyon, who asks if the children have been eliminated. 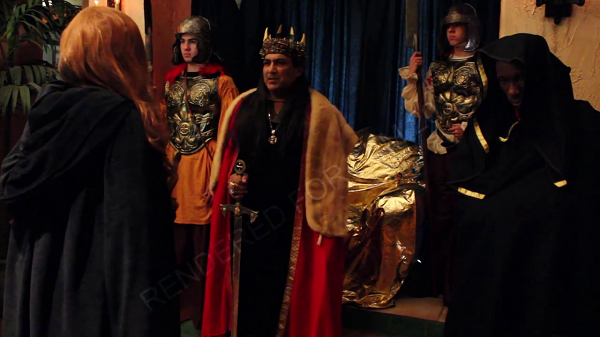 Gertrude explains that the children were able to evade capture – and it gets worse! Even worse than the framing of this next shot of Gertrude staring directly into the camera: 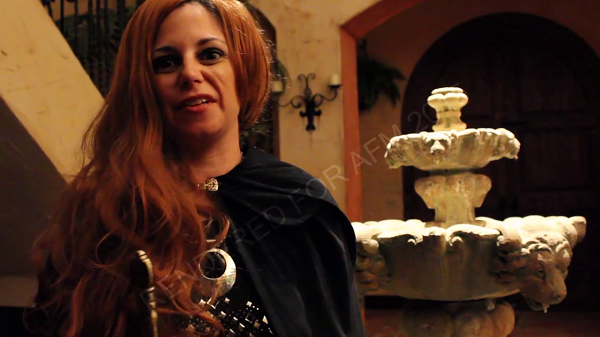 I could teach classes on how poorly framed this shot is.

Let’s recap, in terms of anything that could be remotely consider a test or temptation:

Where the fuck were the other three tests?

Back to the scene. King Apollyon is angered by this – well, in terms of what’s happening on his face, he’s ready for lunch, but I think we’re supposed to intuit that he’s angered by this. He sneaks in some helpful exposition for the audience:

Gertrude needs help, so Apollyon says his sons will help her, and orders her to call up all the sorcerers from the underworld to dispatch Maya and Joey, along with anyone else she needs, which they apparently weren’t doing already…because…reasons.

We cut back to Maya, Joey, and Oraculus, who are staring at the empty sky and a tree. O-kay. We hold on the tree for a long moment until Libertine shimmers into existence. Wait…so they were staring into empty space while nothing was there just wondering if their fairy god-dove would appear? I mean, you’d think a more normal sequence would be the three of them are hanging out beatboxing or something, Libertine appears, they all jump, Joey says something like “You scared the shit out of us!”, we realized that the shit was quite literally scared out of Oraculus, and then the scene continues, but I guess that’s why Gerry Tesch is a film director and I…well, I’ve also directed films, so go fuck yourself Gerry, you’re terrible at this. 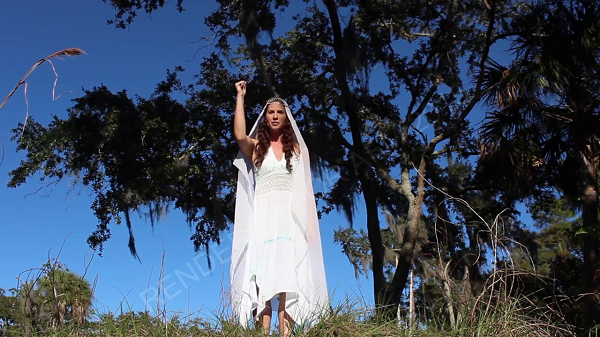 May it be a light to you in dark places where all other lights go out.

Libertine explains she saw an explosion and then lots of fairies preparing for battle. Joey flips his shit a little bit and asks how they are supposed to fight them with sticks and stones. Oraculus pats him on the shoulder and says “Don’t beat yourself up, Joey. Leadership is responsibility.”

Dude. He wasn’t beating himself up, he’s wondering how they’re going to defeat an army of fairies that can do magic. Which is actually slightly responsible, come to think of it.

Libertine adds that there are “beasts of the underworld” that are coming to kill them. Maya asks what they should do, and Libertine replies that they should “be strong” and that this is their Test. Well. That’s super helpful advice, Libertine. It’s also great that this is supposed to be testing Maya and Joey so you’ve…told them what they’re up against in advance. Great test of their character and leadership abilities, capacity to make quick decisions under fire, all that stuff.

They roll back to camp and Joey hops up on a table to make his big speech. 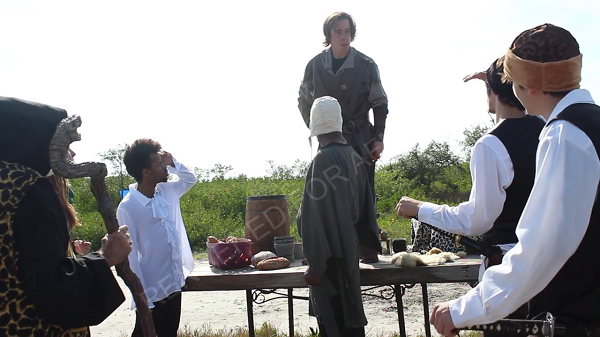 He explains that there are several hostile fairies that are coming to kill them all, and glares down at the black guy in the front row. “You scared?” he asks. The black guy stars back, completely expressionless. I’ve never been so certain than an actor showed up on set stoned out of his gourd, but this guy is clearly as high as a kite. If it turns out they found him passed out where they were filming and just stuffed him in a ruffled shirt to appear as an extra, I would not be surprised at all.

“Don’t worry. You have all the strength you need right here. [Motions to his heart] When we began this journey, we were told that there was a promise made to us, but several problems happened, but there was always help.”

In fairness, maybe he was about to get to the good part, but the super high guy gasps and clutches his chest and keels over and everyone freaks out. I am also reasonably certain that this guy just had a heart attack and died on-set, and they just wrote it into the movie, because you can’t pass up great production value.

Turns out it’s the fairies, who come stalking out of the underbrush to menacing sound effects. Oh no! Maybe we’ll find out why if they can instantly give people heart attacks from fifty feet away, they didn’t just do exactly that to Maya and Joey.