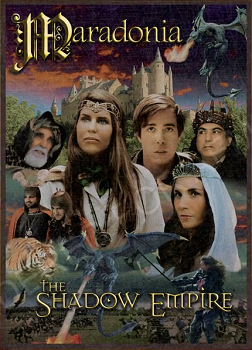 It’s here. The wait is over. On October 7th, 2016, the Maradonia movie was finally posted in its entirety on YouTube…with a watermark…and by the account, “Americas Top Stripper”, which is a little ironic considering Gloria Tesch’s chosen career.

I’ve written about the tortuous, five-and-a-half-year production debacle that was this movie before, so I don’t need to recap everything. Between their cinematographers calling them out for shady business practices, multiple people getting fed up with and quitting the project, their IndieGoGo campaign which raised 8% of their goal, the torturously bad 9-minute trailer – there’s honestly enough there to fill a small book.

Over the years, I’ve had email correspondence with a couple people who were involved with the production of this movie, and if their accounts are reliable – and I have no reason to believe they are not – Gloria’s father Dr. Gerry Tesch who “directed” this movie, squandered the majority of the family’s money financing the film. The fallout resulted in his wife leaving them and the Tesches being evicted from their house. Which is honestly a little depressing, even more so because the end result was this absolutely stunning god-awful piece of shit movie.

I actually enjoy bad movies, I have an entire shelf of some of the worst things ever committed to celluloid. Stuff like The Room, or Birdemic, the masterpieces by Neil Breen, or anything directed by Uwe Boll. And I can say with confidence that Maradonia: The Shadow Empire blows them out of the water.

25 Responses to “Maradonia: The Shadow Empire”