Maradonia™ and the Law of Blood » Part 5: Her Physical Gifts 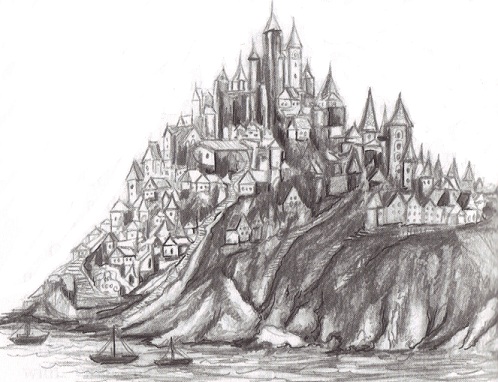 This drawing is actually pretty good. A little inaccurate, since I don’t see any kind of harbor, or even a dock, but hey, what do I know?

The dragon delegation circles Karthago a few times, which nearly creates a panic, because most of the townspeople had never seen a dragon before. I think that actually would cause a panic, though, not just almost.

Tesch specifies that of course there had been messenger dragons sent to prepare for their arrival, however they’d arrived in the middle of the night. And of course TPTB didn’t bother spreading the word that a delegation of dragons were coming as part of a peace envoy.

It was like an air show! Thousands of curious onlookers watched the dragon parade of the Tyronian air power in the sky and many of them did not know if this armada of airships was friendly or hostile (page 121).

Okay, that is nothing like an airshow. An airshow involves people showing up to watch paid professionals fly around to show off their skills. Everyone knows who they are and nobody is in fear of their lives. This incident is more likely to involve people grabbing their children and diving into trenches or bomb shelters. Lastly, if you’re going somewhere to try to sign a peace treaty, isn’t it a little arrogant to fly around and display your air power so blatantly? Kinda sounds like they’re trying to show the Karthaginians up, which will put a crimp in the treaty negotiations.

Maya and Joey pop their crowns on and pretty soon a crowd of people show up and welcome them. Everyone cheers, there’s a military marching band, trumpets are blown, and everyone is delighted to see them…for some reason. I mean, Karthago isn’t even on the map. Nothing that Maya and Joey have ever done has ever effected Karthago in the slightest. Also, they’re only there to try and get Karthago involved in the war, which will probably end with thousand of Karthaginians dead. Why is everyone so excited to see them?

Queen Dido rolls up and greets them, and mentions that she heard about Maya chopping off the dude’s head, and that he ran after his head was chopped off and managed to free eight of the traitors. Maya says that bad news travels fast.

“This is not bad news, Queen Maya. This is just impressive news because it shows that you are a wise and tough ruler?” (page 123)

Maya manages to get herself conned into letting eight traitors get off scot-free through her own naïveté, and that shows that she is both wise and tough?

Dido immediately says she has some questions and immediately asks Joey how he destroyed the airships in Oceanside and how he defeated the Rawken army. Joey doesn’t answer the question and Dido doesn’t press the issue…for some reason. Instead, they get in the chariot and head towards the castle. Joey blows a whistle, releasing the dragons, which seems a little insulting considering the dragons are intelligent creatures that can think and speak.

They see a herd of Dinophants roaming around on some grassland, because apparently that city built on a little rock mountain next to the ocean has a lot of grassland in it.

Anyway, Tesch describes the Dinophants. They look kinda like this: 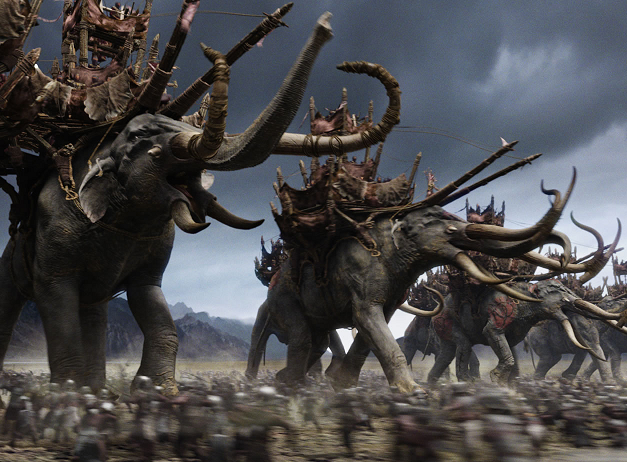 And, apparently, they have over two thousand Dinophants. That’s awesome. Time for math! Some quick Googling tells us that elephants in captivity eat a solid 200 lbs per day and shit out about 40% of that. The Dinophants are bigger than normal elephants, but for the sake of simplicity, let’s stick with those numbers. That means that Karthago has to supply their elephant herd with 400,000 pounds of food per day, and also haul away and dispose of 160,000 pounds of elephant dung.

They have a delicious meal, an extensive meet and greet, and finally retire to a small concert room with the royalty.

Maya wore a simple dress made from Tyronian purple. It was tailored to display her small waist, but disguised her other physical gifts (page 129).

Prince Rasmos eyes Maya and thinks she’s pretty hot. She shakes his hand but pulls it away before he can kiss it, and Maya feels bad for him.

‘The poor man,’ Maya thought. Prince Rasmos was looking at her so earnestly and she knew that her skin and her appearance made a strong impression on him (page 129).

Her skin made a strong appearance on him? In a ‘wintry cream’ sort of way, or a ‘it puts the lotion in the basket’ sort of way?

Apparently he’s pretty decent-looking, and Tesch spends an entire paragraph describing him, but it doesn’t matter, because he’s not General Henry.

They talk for a bit. Karthago is not on good terms with Ophir, and Queen Dido warns them that when they talk to the Senate, the first question the Senate asks them will be about how Maradonia and Tyronia’s relationship with Ophir is. I find it intriguing that Karthago has a Senate as well. Every single one of these countries has royalty which pretty much have supreme executive power and can do whatever the fuck they want, but they also have Senates that wield some power, although that power is never really explained. It’s not necessarily a bad concept, but it’s not developed in any way, and it’s also a little weird that every country has pretty much the same system.

And when I say “weird” I mean that it’s poor writing.

Dido advises them to offer the Senate a trade port – maybe an island or something – and then the Senate would be much more inclined to listen. And with that they call it a night. Maya goes back to her room, very tired, but thinks about Prince Rasmos.

It’s than, Tesch. Not then.

Dido has dreams. She sees ships. Then some old men show up and walk around. There’s some old ugly ships and three big warships and the ships crash into each other and the pretty warships sink and the old ugly ships sail off into the sunset. Hmm. This kinda reminds me of the king’s dreams in the Biblical story of Joseph – seven fat cows are eaten by seven skinny cows, and the same again with wheat.

Dido wakes up and is all sweaty. Eventually she falls back asleep and dreams about some men in the garden. One of them pulls out a glass object and shows it around. And one of them has a small crown.

The next day Dido is confused, so she calls her advisors together to ask them what they think. Nobody knows, but someone points out that Maya and Joey are well-known to be magicians, and everyone knows that magicians can interpret dreams. Dido agrees, so she calls in Maya and Joey and explains her dreams. Maya and Joey step outside to discuss it, and by “discuss it”, I mean that Maya telepathically calls Master Dominatio and they discuss it. Maya thinks it might mean that Karthago is going to be attacked by an older country, like Ophir. Dominatio disagrees. He thinks that the ships represent seasons:

The three good bad seasons will swallow up the three good seasons of prosperity and growth of wheat, corn, fruits and vegetables… (page 138).

Yeah. This is going to be another Bible rip-off.

Dominatio explains that Dido’s second dream means one of Apollyon’s Master Magicians has to come to kill her and her family. Well, of course. We can’t have Apollyon’s plans ever actually work – we need random Deus ex Machinas to show up, spoil any tension in the plot, and bail our heroes out.

Maya severs the link and tells Joey she knows what the dream means. Joey is confused.

“Yes Joey, I know…believe me! Please, don’t look at me with the eyes of a Glimmer Man!”

“With the eyes of a Glimmer Man? What is this? What do you mean?”

“Great King Joey, the light in your eyes shines at the moment faintly because you only have a faint idea of the Fifth Dimension.” (page 139)

I think this is something I might try to adopt into my personal life. At times, for no real reason, I’m going to make up random Capitalized Names for things. Then I’m going to pretend there’s nothing weird about it.

Maya goes back in and explains that they represent bad seasons and good seasons and stuff. Dido is impressed because she didn’t expect this much wisdom and spiritual knowledge from Maya. Well, to be fair, Maya’s a fraud, Dominatio was the guy who interpreted all this. However, unlike the Bible story, where Joseph was careful to point out that GOD interpreted the dreams, not him, Maya is totally going to take credit for all this.

Dido believes her, of course, but as everyone knows, when you have spooky dreams, the dreams aren’t there because your subconscious mind is trying to make sense of your neural synapses randomly firing, it’s because dreams can accurately predict the future. Dido immediately decrees that Karthago will start hoarding food to get through the bad years.

Maya explains the other dream means two of Dido’s Council Members are traitors and they’ve invited one of Apollyon’s Master Magicians to eliminate Dido and the royal family and put the traitors on the throne instead.

They arrange for King Joey to speak before the Karthaginian Senate. This is apparently a very big deal, because it’s forbidden for any foreigner to ever speak before the Senate, and no foreigner has ever done it. But Joey gets to, because he’s Special.

The Senate is shocked when they hear about Maya’s dream, because, of course, the Senate was informed. After all, when you find out that there are two traitors in the Senate, the first thing you want to do is…inform the Senate.

Dido explains that Karthago has way more warships than everyone else because they have a unique technique for building warships. Which is great, except I don’t really give a fuck about how they build warships unless it impacts the plot in some way, and I have a feeling it won’t.

Dido spends another page talking about Karthago’s trade program, and another page talking about their background – she was the daughter of King Belus from Ophir, and she married her uncle, but then her brother murdered her hubby and became King of Ophir, and she had to flee to Karthago, where she started ruling, because monarchs who flee their country and settle in other countries inevitably start ruling that second country.

Later, they talk about the Dinophants. It’s not terribly interesting, although Maya has a moment of oddly specific premonition:

‘I am convinced that these animals will soon see a real fight… a bloody fight between the forces of the free kingdoms and the Evil Empire of Terra Mili in the Valley of Harmon Gorgonia in the Land of Maradonia.’ (page 147)

Really, Tesch? This is how Maya thinks? Tell me, if you went to a military base and saw a bunch of soldiers, would you think I am convinced that these soldiers will soon see a bloody fight between the forces of freedom and the terrorists of Al-Qaeda on the streets of New York City in the land of the United States of America? Is that honestly how your mind works?

Maya asks to be taken back to the palace, because she’s pretty hungry. Careful, Maya! You want to keep that small waist. You can’t survive by the other physical assets alone!

Rasmos looks at Maya and says that after Joey’s speech, he’ll tell Maya a secret [!!!].

She stared into his Hazel eyes and said nearly breathlessly, “Yes…” (page 148).

7 Responses to “Part 5: Her Physical Gifts”