Maradonia™ and the Law of Blood » Part 3: Empty Shell People

Princess Krimmy is thinking nonstop about King Joey because she’s head over heels in love with his firm, muscular, 15-year-old body. I guess that’s why, we don’t really get any reasons why she likes him.

Krimmy angsts because NOBODY UNDERSTANDS HOW TERRIBLE HER LIFE IS. Observe:

‘All those dumb people actually think I am the happiest girl in the kingdom who has absolutely everything… royalty, riches, hair… like gold and… a beautiful, slender body… the most beautiful girl in all the kingdoms! The best dresses, boxes of jewelry and servants.

I hate it here! I hate it! Nobody knows how lonely and sad I am all the time!’

Yeah, yeah. Your life is terrible because nobody understands how awful it is to live in the lap of luxury. Been there, heard that, don’t care.

Brunhilda comes in and yells at Krimmy for her mood swings. Then Krimmy accidentally lets it slip that she misses him, and Brunhilda finally puts two and two together and realizes Krimmy has the hots for King Joey. She immediately starts trying to explain why Joey is too young, too foreign, and a really bad match for Krimmy. Which doesn’t really make sense. From the point of view of the royalty, Joey’s a perfect match. He’s young, prime breeding material, and is King of the powerful country of Tyronia. He’s the perfect candidate to get married to Krimmy. However, Brunhilda isn’t a fan of the match, so she tries to convince Krimmy that Joey’s a whore. Because she knows about the mermaid fiasco:

This doesn’t work and Krimmy starts hurling expensive vases and jewelry at her sister, who says that at first, Joey had the hots for her, but then he saw Krimmy and was immediately taken with her beauty. Krimmy gets up, runs outside, and takes off.

Turns out that Krimmy has a secret garden, which she calls the Garden of Tears, which is kind of a depressing name.

Krimmy cries. It’s not a single tear, fortunately. Instead, it’s a never ending flow of tears. She ponders this.

‘If I could collect every tear I shed over the years at this place, I believe it would be an entire stream of tears.’ (page 58)

After awhile Melanie, one of the midwifes, shows up. Krimmy wonders how Melanie knows about the Secret Garden, but Melanie has been around for awhile and knows all the castle secrets. She’s also experienced enough to know that Krimmy is in love. So she tells Krimmy a story about how once, as a young girl, she was out gadding around and met a gorgeous young man named…uh, Kevin. And they totally started making out. Krimmy is excited and wants to know what happens next, so Melanie whips out yet another Ice Cream Koan:

“Without ceasing your work of faith, your labor of love and your patience of hope you will never be really successful in life.” (page 60)

I think you might have left out a word or two, Tesch, because that sentence makes no fucking sense.

Kevin proposes and they organize a secret marriage and wedding out in the forest, along with their wedding night, a la Braveheart. And…oh god…Tesch tells about the wedding night:

It was a night of sweet tenderness and explosive passion… a night of brief pain and full love (page 61).

That’s Tesch referencing the pain of losing your virginity. And that is a sentence I never thought I’d type.

So of course, it turns out that in this village that only the parents can choose their child’s spouse so their marriage was totally verboten. Naturally, Kevin and Melanie decide to just stroll around the village like man and wife, necking. And the gossip begins. So her parents and the village council has a meeting to decide what to do because two young foolish teenagers had the audacity to hook up without their permission. And how do they decide to respond to this most wicked of transgressions?

Seriously. Apparently this crime is so horrible they need to kill the guy.

And now it’s time for some more Bible plagiarism: They send Kevin to war and give a letter to the captain:

‘Set Kevin to the forefront of the hottest battle and retreat from him so that he may be struck down and die because he does not follow the ancient rules in our community!’ (page 62)

In case you’re not familiar with this story, this is when King David knocked up Bathsheba and needed to get rid of Uriah, her husband.

The plagiarism continues for another page and half with sentences and paragraphs lifted almost verbatim from the Bible, and finally Tesch starts making up her own story again. See, after Kevin got shot, he pulled out some paper and wrote Melanie a note with his own blood…that was oozing out of his arrow wound. Okay, I can buy that. And then he gave the note to a passing dove who flew it back to Melanie. No, seriously, that’s what actually happens.

Tesch even reprints the letter:

It goes on, but it’s not particularly interesting. But still. Is there a bigger cliché than someone dying saying how cold it is?

Krimmy asks Melanie how she dealt with all of that, and Melanie replies with yet another random bit of nonsense:

“Well, the world is divided into ‘Dreamers and Doers’ and we are mostly surrounded by ‘Empty Shell People’ who always try to tell us what to do.” (page 66)

Finally Krimmy opens up and tells Melanie all about Joey and how much she loves him and how annoying Brunhilda is. Melanie says that although she’s been tasked with keeping an eye on Krimmy, she doesn’t agree with that, so she’s going to help Krimmy sneak out to visit Joey. They’ll visit a couple of griffins who live in the mountains who conveniently happen to owe Melanie a favor, and the griffins can fly Krimmy to Tyronia. Krimmy is delighted with this, so she heads off to pack her bags.

And we’re finally back with Maya. She’s one of the two main characters, and I’d argue she’s even more of a main character than Joey is. And she doesn’t show up until 71 pages into this book.

Maya is chilling out waiting for Senator Hilton and Judge Kingston. Apparently Maradonia urgently needs some reforms, so Maya put Dominatio in charge of all the affairs of state, which is probably a good idea, since Maya doesn’t know jack shit about affairs of state.

Queen Maya had commanded the three wise men from Villusio Island to join her (page 72).

I think Maya needs to learn something about being a leader. One of those things is that you don’t ‘command’ a bunch of old geniuses to come and help you run your country. You fucking ask them.

Of course, all three of them are down with being ordered away from their homes and lives and being put in charge of running an entire country, and they pretty much handle everything for Maya.

Well. Of course. I mean, she went from knowing nothing about swordplay to a cross between Aragorn and The Bride In about a week and a half, so why isn’t she a natural at politics?

And…one of her goals was to win the forthcoming war against the Evil Empire! (page 72)

I guess that’s better than wanting to lose the war.

There’s a big council, at which Maya exposits to everyone that Maradonia has the best Spy System in pretty much the world. These spies have informed them that Apollyon plans to attack Tyronia again, and then he’ll invade Maradonia. And they really need to sign a treaty with Karthago.

General Montega, who’s in charge of the navy, speaks up and says he doesn’t understand why they need Karthago’s ships, since everyone knows that the Powers of Evil (despite believing in teamwork) are deathly afraid of water. Maya then promptly hands Montega his ass on a plate with all the trimmings and says of course, Apollyon knows that everyone knows his fear of water, which is why nobody would expect it. Plus, he can use the pirate ships to attack via the sea. Now, there’s no point wondering why Maya hasn’t bothered to keep the General in charge of her entire navy informed about any of this vital information that is crucial to keeping Maradonia safe. We know that Maya is really bad at communication, it’s why Genarius is dead and she’s the Queen. But I would like to raise a different point, and for that, I’ll need to bust out the map. 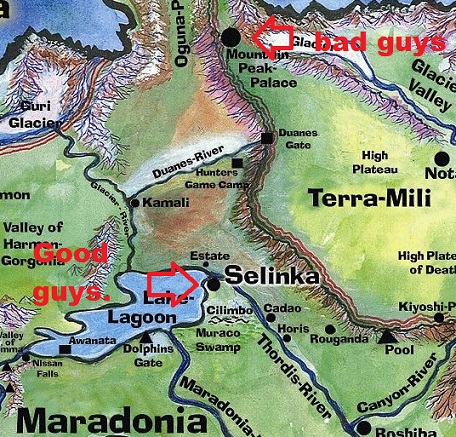 It’s interesting to note that there really isn’t any water between the good guys and the bad guys. Why, precisely, are ships all that important?

Sure, you could argue that Apollyon needs ships to attack Tyronia, and that’s true, but I need defending Maradonia is a lot more pressing since they’re a lot more vulnerable to attack.

Anyway, the plan is to form an alliance with Karthago, then attack the pirate ships and wipe out their navy. Everybody wins! Except Apollyon, of course.

Maya explains that Apollyon has one million warriors and he’s planning on marching into Gorgonia first to take them on. However…if they can just get that alliance with Karthago, and if Karthago is willing to send two hundred ships, each ship loaded with ten Attack Dinophants, they could totally win the war. So, essentially, if they can convince Karthago to fight the entire war for them, they could win.

I’m not sure what a Dinophant is, but I’m guessing it’s a Tyrannosaurus rex with an elephant trunk.

Apparently, Ophir, Tartessus, and Punt have all informed them that they’re staying neutral, so Maya is going to Karthago to negotiate a treaty and she’s leaving Dominatio in charge.

We get a couple pages of pretty boring details about them preparing for war and buying weaponry and shit like that, and finally Maya starts wrapping up and mentions the disappearance of Abbadon, and the rumors that Joey killed him. She tells them that Joey had nothing to do with it.

“I assume that Plouton, the younger brother of Abbadon may have plotted against his older brother, but I am not quite sure.” (page 78)

Well of course she assumes that. She’s the Protagonist, and one of the side effects of that is Never Being Wrong.

Then again, I’m not sure why anyone would care. Apollyon and the Powers of Evil are their sworn enemies, they’ve already declared war on Tyronia, they marched into Maradonia and laid siege to the capital, and Abbadon murdered King AstroJesus. Why would anyone care of Joey killed Abbadon? I think they’d all be delighted.

The meeting winds down, but before it ends, Dominatio asks if he can ask them all something. Kingston says okay.

Dominatio explains that when he was hanging out with Prince Michael, he grew very attached, and wants to adopt Michael as his son so Michael has a loving father figure. Since Maya let his actual loving father die. Maya is fine with this. Of course, Genarius wanted Maya to be Michael’s legal guardian, but they decide that Michael can have two legal guardians and they’ll throw Dominatio into the mix.

Goran explains that he had two sons, but they were kidnapped and his wife was murdered and he wants to know what happened to them. Maya wonders aloud what the bad guys are doing with all the kidnapped children. Plot point!

Melchisedek says that once, he saw in a vision a bunch of kids being dragged inside a huge black tower and he’s always wondered what was going on with the kids and the tower, but he couldn’t figure out because his vision was blocked. But he could feel the evil power of dark craft. Spooky!