Maradonia™ and the Law of Blood » Part 1: The Ancient Bow and Arrow Secrets

Team Tesch has really kicked it up a notch. The interior of this book actually looks like someone took some time to create a design that doesn’t look completely amateurish.

That’s not to say it looks good, however. They’ve picked a spooky gothic font for chapter titles which is okay, I guess, but it feels overly dramatic.
There’s a little section titled “Books by Gloria Tesch,” which is great and all that, except for this is the list:

And no…she didn’t go back and retcon the titles. They’re still titled the way they always have been. They just for some utterly retarded reason decided to list them that way on this page.

And, of course…the last two books haven’t even been published yet. Isn’t it a little disingenuous to claim you’ve written books that haven’t been published?

The book begins with a page with…uh, I dunno, I guess it’s a quote:

The people who sat in darkness saw a great light…
And those who sat in the region and shadow of death…
Light has dawned!
The Prophecies of the Seer

I’m guessing that this is supposed to be a quote from The Prophecies of the Seer, whatever or whoever that is, but….that doesn’t make any sense, grammatically or otherwise. So I’m not even going to bother trying to make sense of it.

You know, I just realized that in the split versions of the series, the last book is called Maradonia and the Dragon Riders, which has to be one of the dumbest names for a book that I’ve ever heard. Yeah, a few dragons are ridden, but it’s not like it’s a major, or even a minor part of the plot.

Chapter One – The Gahanna 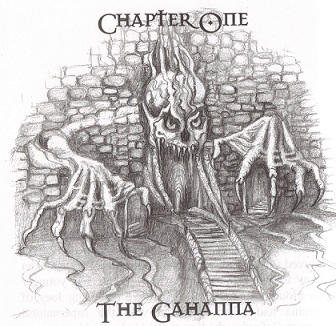 That picture is actually a bit scary.

Apollyon explains that the law of blood is that someone has to die so someone else can live. And Plouton needs to understand this and then use it. Plouton asks how, but they’re interrupted when a bunch of people come in. The Titans, who helped Plouton whack Abaddon, are worried.

Plouton glared with cold eyes over his shoulder and signalized… ‘There is no reason to be concerned.’ (page 30)

According to dictionary.com, signalized is actually a word, but it’s still used incorrectly here. The word is “signaled”, Tesch.

Plouton and Apollyon ramble about laws of nature and Tyronia and it doesn’t make any sense whatsoever, but eventually everyone else shows up and the meeting gets started.

Apollyon is very angry and hollering and screaming. He screams that Tyronia needs to be conquered.

Electric shockwaves, ponderous thunder and blinding lightning inflated and filled the hall. Several dwarfs materialized suddenly out of nowhere, bowed down and nodded as the boisterous voice of King Apollyon echoed a hundred fold through the main hall of the palace (page 5).

Right. It inflated the hall? I don’t think that word means what you think it means. Also, what point is it to introduce the dwarfs if they’re not going to do anything?

Apollyon is pissed because Joey has his key. And other things:

King Apollyon tilted his head down and said with a saddened voice, “It seems to be a fact that King Joey of Tyronia killed my son Abbadon with the power of the Key to the Underworld.” (page 5)

Seems to be a fact? Really, Tesch?

The Titans say there’s actually a chance they could make another Key, because their dead brother, Remmilos, left behind some manuals. Of course, that’s not really possible because there’s no way to get back into the Underworld…except that Apollyon reveals that there is a way, it’s just very, very difficult. You have to climb down through the Craters of Juno into the third level of Gahanna. Plus there are monsters in there.

So let’s get this straight. The Key is incredibly powerful, and it was stolen months and months ago. You even went so far as to sent flying saucers between worlds and into Florida to try and retrieve the Key, because it was the only one in existence…and now you’re just going to bring up, now that it’s convenient for the plot, that oh yeah…there’s another way into the Underworld to retrieve designs for a new Key? After everyone specifically discussed that there was no possible way to make another Key? Bullshit, Tesch. Stop trying to retcon your story.

Apollyon exposits that the first level of Gahanna is full of Lycanoids, otherwise known as werewolves. However, the werewolves tend to be cowards and will only attack if cornered or if they have superior numbers. So that level would be pretty easy to get through. Next, there’s the kingdom inhabited by gargoyles and goblins, and lastly, the third level, which is ruled by King Gardofat, king of the dwarfs, who Apollyon hates. The dwarfs that appeared speak up indignantly, but Apollyon shouts them down. I stand corrected. The dwarfs didn’t show up to do nothing, they showed up to say something irrelevant and then fade into the background and have no more impact on this scene. I guess I owe Tesch an apology.

Apparently, Gardofat’s security guards are spirits that try and enter people’s bodies. They’re called Dybbukims, which is the most unthreatening name I think I’ve ever heard. The only time I can visualize someone saying ‘Dybbukims’ is while pinching the cheek of an adorable infant.

There’s an awkwardly written scene and I think Apollyon is ordering the Titans to enter the Underworld through this route and retrieve the Key, but it’s not clear because of the terrible writing. The characters keep referencing the ‘trail of tears,’ which is apparently the journey through the Underworld, and also pretty offensive to Native Americans.

Apollyon outlines his plans, which is to dispatch the Rawkens against Tyronia, until Joey is forced to use the Key against them. Once Joey does that, they are free to use their own supernatural weapons against the good guys. This is important, because without their supernatural weapons, they’re probably going to lose in a straight fight. I don’t really understand why, since the powers of Evil had their city pretty much surrounded in the first book before they decided to call it quits and go home. But whatever. At least Apollyon is actually using some basic logic, which is a first for him.

Of course, Plouton doesn’t get it, and he tells his father than he doesn’t understand. Apollyon tousles his son’s hair and tells him it’s not a big deal. Actually, wait, that’s something I expect Apollyon to do. His response is more like something you’d expect from someone who is evil:

“Yes, my problem is that you don’t understand me when I speak with a normal voice with you. It’s a pity that I always have to scream at you to make sure that you understand me.” (page 13)

HAHHAHAHAHAHAHHAH. That is undeniably awesome. I wonder if Tesch has finally figured out how to make her unspeakably evil villain an asshole? Even if he’s just a bit sarcastic, it’s miles ahead of the mother-earth and teamwork-loving hippie of the first two books.

Apollyon explains that he’s fully aware that their Rawken army will be decimated and Tyronia will celebrate, thinking that they’ve won. However, the Powers of Evil will be losing a battle to win a war.

Chapter Two – The Attack of the Empire

A scout warns Joey that the Rawken army is massing for an attack. So his bodyguards carry in the royal armor and King Pergamon’s awesome sword, Adar Cory, which is the dumbest name for a sword since Titus, and his awesome dagger, Prontos, which I guess is a better name than Immediatos. Also, wouldn’t Pergamon’s armor be designed for a grown man, not a 15-year-old boy?

We get some backstory. Apparently Joey went through military boot camp recently.

Although King Joey was slick and fast in dealing with different weapons, he was highly specialized in the art of a bow and arrow (page 16).

Goddamnit. Really, Tesch? Is there anything these two idiots won’t be good at? You try and throw me a bone by saying that he’s not the greatest sword fighter around – that would be Maya, of course – but now he’s highly specialized? What the fuck does that even mean?

This place was known for their master archers. These men taught Joey the art and the deeper knowledge of the ancient bow and arrow secrets. They trained and educated him well. King Joey was finally so good that he was able to pin a single horse fly with an arrow to the wall (page 17).

The army mounts up and flies over to this mountain and everyone chills out on the mountain until they see a cloud approaching fast…and against the wind.

We jump over to Big Bertha, who is leading this Rawken army, along with her sisters Beebe and Dodoo, and the two Rawken commanders, Brawn Brandon and Tough Robby.

Anyway, a bunch of dragons have been flying around really high and they dive-bomb into the Rawken army and the dogfight begins. It’s related to us in a tedious, matter-of-fact way that gives absolutely no sense of how the fight actually is.

A few dragons tumble out of the sky and drown. Joey and his dragons realize it’s because the Rawkens attacked their eyes and the dragons couldn’t see anymore, because everyone knows that if you can’t see, you suddenly lose, along with the ability to tell up from down, the capability of flying.

They order the rest of the dragons to protect their eyes. How? Well, the dragons don’t have a way of protecting their eyes, so that’s kinda like telling your soldiers “don’t get shot”. Utterly pointless.

Joey and Danny shoot Rawkens until they run out of arrows, so they pull their swords out, and the battle is joined! By which Tesch means that they stand there and wait for birds to approach them, because if you’re standing on the ground without a ranged weapon you can’t do much for an aerial battle.

14 Responses to “Part 1: The Ancient Bow and Arrow Secrets”