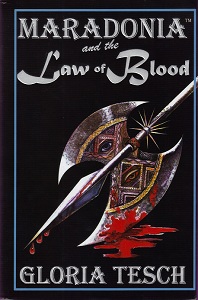 You can buy this book on Amazon.

The cover looks better than previous books, although the image is off-center toward the right. It’s annoying, but I guess that happens.

From the back cover:

Gloria Tesch is one of the World’s Youngest Novelists and widely seen as a great talent, able to take her Readers on an exciting fantasy Journey from the ordinary world to the legendary world – to the Land of Maradonia. In Maradonia and the Law of Blood, Gloria Tesch brings us back to the land were everything is possible. In the latest installment of this thrilling saga, Joey and Maya not only have the fate of several worlds on their shoulders: they are also burdened with affairs of the heart.

Setting aside the ridiculousness of ‘widely seen as a great talent’ – were everything is possible. I think you mean WHERE. It really does not bode well for your book when there’s an obvious typo on the BACK OF THE JACKET.

The font size has also been toned down a little, moving from Dr. Seuss to slightly bigger than Large Print. On the other hand, the margins are tiny, so I guess it evens out. The nicest thing is that the Tesches have cleaned up some of the most egregious formatting errors that plagued the first two books. Hell, the paragraphs are actually all indented properly! Well. Mostly all indented.

3 Responses to “Maradonia™ and the Law of Blood”