Seth stared at the prince. “I still don’t understand why I should learn. I mean if I had ever needed to use such weapons, I am sure I would have been taught. Members of the Brotherhood rarely learn to use weapons, even then only for personal edification.” (page 226)

Interesting. I had no idea the Elves didn’t use weapons. To be fair, we are only 627 pages into this series, and the Elves have only been involved in one fight scene. I went back to the relevant scene in Keeper Martin’s Tale

, and sure enough, no mention of Seth using a weapon.

…which really doesn’t make a lot of sense. Sure, there’s some indication that the Elves are pretty crazy talented, but the entire reason humans invented things like swords, spears, and bows is to kill your enemy before he was close enough to strangle you to death or punch your kidneys clean out of your body.

Valam is insistent they practice, however, because of the fighting competitions and how much they mean. Apparently the duels are kind’ve a big deal in this world, which, okay, whatever, but they’ve been mentioned exactly once and they were treated as pretty irrelevant.

Myrial and Adrina wander along a corridor. After a bit they stop and Myrial has Adrina put on a cloak and hood. They keep going until they arrive at a secret entrance where a guard unlocks a gate, they walk through, and then after a bit another guard unlocks yet another gate.

Part of me wonders who these guards are and why they’re so willing to let the princess wander out into the market, unprotected, especially with so much civil unrest and people actively trying to kill them, but nothing about this series makes sense anyway.

They head out through the market and arrive at a rather large caravan that is headed for the Territories. They go to the caravanmaster’s tent.

Part of me wishes Stanek wouldn’t randomly switch back and forth between stories multiple times each chapter. I don’t have a lot of faith that getting to read a complete chapter on Adrina would help me understand the story, but it can’t be any worse than what I’m currently reading.

Vilmos collapses into a stall. Wait, what? What happened to the warrior who may or may not have been the dude he met at the tournament a while ago?

He had only been a step behind the warrior but had found only an empty corridor when he had raced into the hall (page 230).

The warrior had been looking and waiting for Vilmos. Why the fuck would he randomly disappear?

He sleeps for a while, and then heads out into the city streets. It’s crowded with different races and lots of slaves. After a bit he sees a priest and gets a weird feeling so he decides to follow him. Eventually the priest notices him and tells him to go away but Vilmos says he wants to serve – which doesn’t make the slightest bit of sense but okay – and the priest isn’t inclined to accept that, but Vilmos says that he serves Shost, and then the priest drags him down a dark alleyway.

A chancellor from Vostok named de Vit rolls in with his emissaries. He spits at Seth and demands that they remove the elf from his sight immediately. Valam jumps up to tackle the chancellor but is restrained by the king, which is probably a good thing. It’s rarely a good idea to assault diplomats.

The King asks if a full-forum meeting will be a gathering as outlined in the Alliance Treaty, which would make a lot of sense if we had any idea what the fuck these characters are talking about. Political intrigue is only interesting if we have some idea what these characters stand to lose or gain, and we have no idea what any of them are even saying, let alone the stakes supposedly behind it all.

De Vit says yes. The King asks how long it will take King Jarom to get there. The chancellor says it will take a month. Valam leaps up, jumps over the table, and knocks the chancellor onto the floor. He turns to the rest of the delegates and says that the next insult will result in death, hopefully by kicking them down a well 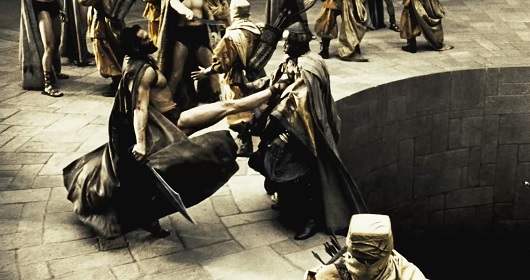 The rest of the delegates are significantly more polite but have more or less the same message. Valam is suspicious of one of them in particular, and so is Seth, which he communicates telepathically. Valam decides he’s going to go and do…well, something, it isn’t elaborated on what he’s going to do. Before he leaves, he tells Captain Brodst to kill anyone who insults our noble heroes.

Valam and Seth spend a couple pages dueling. Eventually Valam gets around to asking Seth why they don’t use weapons and Seth explains:

“The Brotherhood doesn’t use weapons. We rely on our skill of movement in weaponless combat. The techniques can be quite effective, as you’ve seen.” (page 240)

Valam asks how you can fight someone with Seth’s training (stab them) and Seth says not to worry about it because there aren’t very many Brothers anyway.

Eventually the conversation shifts over to what is going on.

“King Jarom requested a gathering. It means he seeks the seat of power which Great Kingdom has always held.” (page 241)

Interesting. How? Is this something where they can have a vote and vote out King Andrew, or will they need to Julius Caesar him? Valam doesn’t bother explaining because this is a Stanek novel.

He and the priest walk for about a page while nothing happens. Eventually they arrive at a dark building and inside there’s a bunch of priests talking about nothing in particular.

The priests started to debate over him as if he was some kind of prize. They decided to take a knife to him to see if that sparked a response (page 243).

What is it with people in Under-Earth randomly deciding to cut other people?

The priests decide to kill him and Vilmos hears a voice in his head telling him to fight so he focuses his magic and sets them all on fire and they begin to scream.

They make their way to the caravanmaster’s tent and find Emel. Adrina demands to talk to him and they head outside to a quiet corner.

Adrina was near tears when they stopped. She turned to face Emel. “You were going to leave just like that? Without so much as a goodbye and taking what’s mine with you?”

“It was for the best, Myrial knew.”

That doesn’t make any sense! If Myrial knew it was best for Emel to leave quietly THEN WHY THE FUCK DID SHE TURN AROUND AND BRING ADRINA HERE?

…this is why this sporking is taking such a long time. Trying to wrap my brain around this writing is slowly destroying my will to live.

They spend two pages arguing about literally nothing. Adrina’s pissed he took the orb, Emel says it’s best because it’s fucking with her head, although I think that Adrina is just bipolar. Eventually some guardsmen notice and come over to take Adrina back to the palace before the seal the city. She says goodbye to Emel.

Seth and Valam continue their dueling practice. Seth is channeling his years of martial arts practice into learning sword-fighting and is already getting good enough to beat Valam, who, of course, has been practicing every day for the last fifteen years or so. Stanek tries to handwave it:

“Your thoughts flowed to me without effort. I used them to decide how to block and attack you.” (page 250)

Still not buying it. Yeah, having a fraction of a second’s worth of notice might be theoretically helpful, but it’s not going to make you an unbeatable warrior after less than a week to practice.