He wakes up and…Xith is there! Vilmos asks if it’s really him, flesh and bone, and Xith…doesn’t answer. Well, it certainly sounds like Xith.

Xith rambles for a bit saying cryptic things like “such a heavy burden” and “the darkness has nearly run its course”. Vilmos, naturally, doesn’t press him for answers, like “What the fucking fuck is going on?” or “Have I been hallucinating for the past week?” or “Has anything that has happened recently been real?” or “Prove to me that you’re really Xith.” Things that anyone with an ounce of common sense would be asking. Of course, I wouldn’t expect Xith to respond to these questions except with his usual diversions.

Suddenly, a new guy shows up. Vilmos realizes he’s Ayrian, Eagle Lord of the Gray Clan. Ayrian has never been mentioned before, however, Ayrian comments on the fact that Vilmos shouldn’t know who he is. Apparently this is Significant.

The once proud eagle lord stared into Vilmos’ eyes. He stroked his beak with a clawed hand, then spread his arms in a wide arc which revealed the shadowed bulk of his great wings as though they were the folds of a great gray cloak (page 354).

They say a picture is worth a thousand words, so here’s a picture: 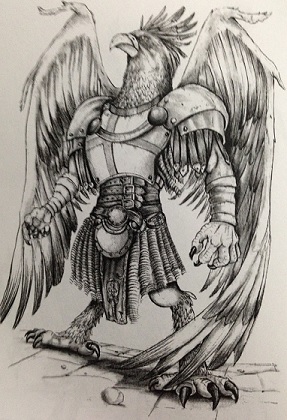 Xith gives Vilmos some soup and tells him he needs to sleep. Vilmos says he’d rather do anything than sleep – unsurprisingly – but apparently the soup is drugged because he passes right out. He’s immediately at the doorway to a tower. He enters and starts climbing the stairs. Climbing ahead of him is a girl with black hair. She turns and he recognizes her as Adrina [?]. Vilmos asks what she’s doing in his dream. Adrina says it’s more like a waking nightmare.

Adrina sat on a step, still looking at Vilmos. “I’ve been climbing for hours. I still haven’t reached the door. It’s the strangest thing. One minute I was in Imtal reading from a scroll. The next, I was here.” (page 356)

Do you see how remarkably easy that was, Stanek? A character asked what was going on and the other character answered. We now understand the context for Adrina being in the scene (was magically transported, is stuck, doesn’t know what is going on) and now we have a baseline for her character and how she might react within this scene.

…I can’t believe I have to pause to congratulate Stanek for writing 101, the stuff even Gloria Tesch has mastered.

Vilmos tries to catch up with Adrina, but despite his efforts he’s unable to. He asks her what she was doing. Adrina says she was reading a scroll that said something about a dragon’s keep, and repeats the rhyme from the page Midori showed her:

Vilmos finds this confusing, then he recites his own Prophecy:

“Find the strength of Uver. In Zadridos, you will find the key to the City of the Sky and there you can right the wrongs of the past.” (page 357)

Vilmos thinks that he’s in Zadridos. Why or how he thinks this, I’m really not certain. I mean, the narration could say “for some unexplained reason, Vilmos felt certain he was in Zadridos” and fuck it, I’d accept that. If the book wants Vilmos to randomly Just Know Things because of Magic, fine, but please specify that so I know why it’s happening and I can assign a probability to how much I trust to the narration and whether I want to accept it as reality.

Adrina remembers her sister’s words “two as one” and tells Vilmos that there must be two towers, not one, and so they need to climb together, and they’ll reach the top. Vilmos is confused, and so am I, since apparently Adrina’s been climbing for hours already, but whatever. They do it and it works perfectly and they reach the top.

He ran to hug her, but his hands passed through her instead of touching her (page 358).

Suddenly a giant clawed hand comes out of the door and grabs Vilmos. He struggles and bites it and breaks free. Adrina screams at him to close the door but doesn’t help because…well, she’s a princess, and she doesn’t know how to close a door? I’m really not sure. He kicks the hand and there’s a roar and the hand moves back and he slams the door. Now, logically speaking, a creature with a hand large enough to pick up a 12-year-old boy isn’t going to have much of a problem with said boy kicking it, but Stanekally speaking, there isn’t any logic in this book.

Adrina says they need to open the door together and assures him the monster is gone. They do this and find themselves in a room filled with hundreds of torches. Then they realizes they aren’t torches…they’re tiny fire-breathing creatures. One of them bites Vilmos and his flesh starts turning into stone. Adrina freaks out and doesn’t know what to do, so finally she grabs Vilmos’ hand and she starts turning to stone as well. One of the creatures bites her hand. And then suddenly all the creatures become one and

The creature that stood before her had the great wings and body of a winged serpent, the torso of a man (page 361).

This is the Dragon King. He says they’re looking for answers and a key, and asks which they want. Adrina and Vilmos say they want “Two as one.” The Dragon King agrees and the room starts to crumble. They haul ass back down the stairs. At the bottom, the Dragon King is there waiting. He says that she is the key. Adrina says this is why he’s been helping her and why the creepy old lady has been hanging around. Um. Yeah. I’m totally lost here. I don’t have anything witty to say.

“Find the door,” the Dragon King said. “Open it. You are the children of the light and of the dark. You must do what must be done.” (page 362)

Adrina asks about the Elves, but the king doesn’t care about the elves.

Uh. No, he isn’t. There has been nothing in this series about the Dragon King owning jack shit to the elves.

Her arm sank up to the elbow in the wet flesh. She grabbed at the fleshy meat within and, gripping it, withdrew her arm (page 363).

She pulls out a tiny dragon. The Dragon King changes forms to the old blind woman, reciting the old, well-familiar lines. Well, they’d be familiar if we hadn’t learned then 500+ pages ago.

“Child, I cry for you. I cry because I see you standing in the middle of a killing field. I cry for the thousands dead at your feet…” (page 363)

Adrina says it’s not true. DK says it is and Valam will die after moonrise.

“Leave Valam out of this!” Adrina flew into a rage, started kicking, punching, screaming (page 364).

She has a vision of Valam lying dead. The Dragon King says the wounds aren’t fatal, but dragon’s milk is. He doesn’t elaborate about the type of poison or how they can counteract it.

No. I emphatically don’t.

Vilmos and Adrina argue about black and white and what exactly that means and eventually decide to go through separate doors at the same time.

The fight continues. Brodst knocks out Shalimar. It’s Lord Geoffrey and his son Nijal against Seth and Brodst.

Both pairs were visibly fatigued. It became a struggle to make simple attacks and counters (page 368).

Brodst and Nijal simultaneously take each other out, which really doesn’t sound like it would work. Seth and Geoffrey exchange a few blows and then he knocks Geoffrey down. Seth holds his sword for a bit, trying to decide whether he should finish Geoffrey off:

The image of Redwalker Tae flashed through Seth’s mind. Loyalty to his cause is what he needed, not a dead lord (page 369).

So he puts the sword down and helps Geoffrey up and they walk off the field and everyone stares at them without saying anything or shouting or cheering or even a slow clap. They go to where Valam is dying and who should show up but Adrina, who explains he’s been poisoned. She opens her bag and pulls out a tiny dragon that she holds behind its head. Um…okay, a dragon’s bite can cure poison? Or does Valam have to eat the dragon? Stanek doesn’t say, but….

Geoffrey turned to Seth. “Know this,” he said. “You’ve earned my respect and that of the Free Peoples.” (page 371)

Hooray! The plan worked and now they’ve won popular support for everyone to overcome their deep-rooted prejudice and hatred of the elves and now they’ll come and fight in the war against the Dark Lord! Maybe!

There’s lots of celebrations after the competitions, but our heroes leave quietly and head back to Imtal.

No one spoke of the poison lest the whisperers know they had almost succeeded. King Andrew understood. He didn’t need to be told that something grave had almost happened (page 372).

Wait, seriously? You’re not going to tell the KING that someone attempted to murder his son? You don’t think that might be relevant information to share with the monarch of the fucking country?

Adrina left the council, speaking not a word about how she had came to be in Solntse (page 372).

And…he didn’t even ask? Not even a casual, Hey, daughter, how did you magically teleport out of the sealed castle to another city twenty miles away?

He is the worst fucking king.

Adrina’s been freaking out because she thinks Vilmos must be dead. Ah. I take it he’s vanished again. She smashes some dishes in anger and then Myrial turns up. Adrina is horrified at the way she looks. Stanek doesn’t bother describing her, but I’m guessing she’s covered in bruises and bandages and a couple of casts. Adrina guesses it was Bever.

So, with a (probable) concussion and a broken leg, a 13-year-old girl was able to overpower a fully grown man. That seems likely. Naturally, Stanek doesn’t explain how it happened.

Adrina is still worried about Valam and Vilmos, but Myrial comforts her. Apparently Lord Geoffrey and the other leaders are all coming in to have discussions about whether they’re going to help the elves. Adrina asks how she knows this.

It’s not that easy to just take over someone’s spy network – but setting that aside for a moment, is Myrial supposed to be a stone cold sociopath? To recap: she’s around 13 years old, and she just had someone brutally beat the shit out of her, bash her head repeatedly against the ground, rape her, and stomp on her leg until it broke. And here she is, calm, cool, collected, able to casually discuss how she murdered her rapist and now leads the main spy ring inside Imtal.

Anyway. That’s the end of the book. We’re officially halfway through this fucking series.