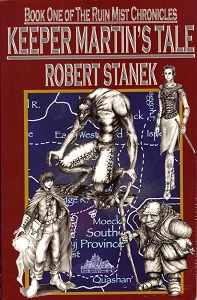 There’s an objective difference between good writing and bad writing.

Bad writers can still have fans. It’s only the truly exceptional who can achieve true unreadability. Most published writing is merely mediocre, still possessing the ability to string words together successfully enough to maintain a fan base. However, regardless of how popular a bad writer may be, there will always be a sizable group of critics there to tear apart their prose, examine their characterization, and point out that despite currently residing upon the New York Times bestseller list, their novels are poorly written drivel. When someone is an objectively bad writer but the vast majority of Amazon reviews are proclaiming them to be the American Tolkien, it looks a little suspicious. In fact, if a writer is bad enough, it logically follows that something has to be going on with the reviews, because it’s simply impossible for that percentage of readers to actually like the books.

Robert Stanek is a bad writer.

But he’s not just ordinarily bad. Not Christopher Paolini bad. Not Stephenie Meyer bad. Not even Robert Newcomb bad. No, this is surpassing Eye of Argon-bad. This is spectacularly bad, spiritually bad, grammatically, morally, ecumenically bad. This is the kind of badness that Ed Wood can only dream of, brought on by the potent combination of a gigantic ego and a truly stunning lack of talent.

, which means that Stanek split the story in half and released them again in ‘children’s’ versions. That, and different chapter titles, are the only real changes. The text itself is identical.