This one was written by me.

Chapter Sixty-Two: Over the Wall and into the Maw

Elva asks Eragon to stop chewing on the inside of his mouth, because it’s distracting and disgusting

With some surprise, he realized that he had bitten the inner surface of his right cheek until it was covered with several bloody sores (page 611).

Right. Haven’t we all been there and accidentally chewed the inside of our mouth off? Pain doesn’t work that way, Paolini. It is possible to accidentally cause yourself harm, but that’s usually because there is something else overriding your pain sensors, like adrenaline. This isn’t happening. He’s been saddling Saphira.

Eragon spent part of the night meditating while Elva talked to the dragons. Eragon can sense that they are afraid of her, because they have no defense against her power. I’m going to come out and say that this doesn’t really make any sense. Elva has power, but she is not powerful. If you want to get rid of her, it’s actually pretty simple. To help you out, I’ve put together this handy flowchart. 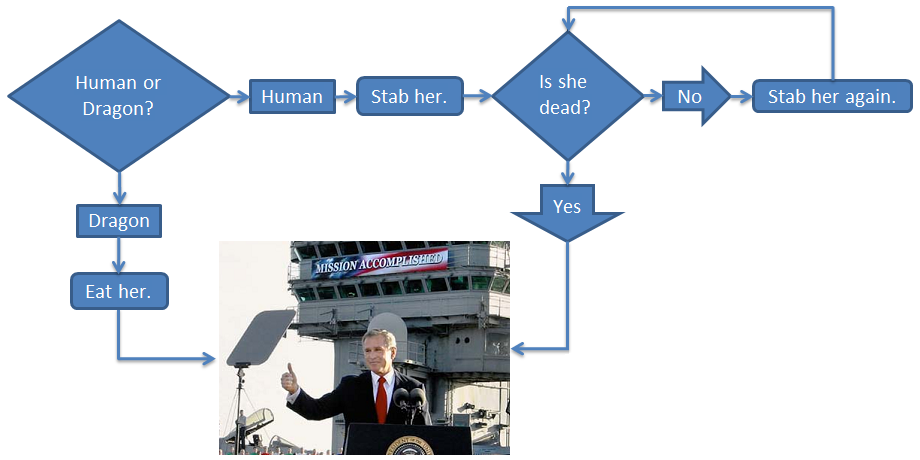 Theoretically, she might be able to anticipate people wanting to kill her. In that case, you’d need to be able to run or fly faster than a little girl.

They get ready for departure and watch the Varden march out to war. Eragon is impressed that they’d be willing to march out after seeing Shruikan, which makes sense because they’ve never fought against a dragon before, except for Thorn. Saphira says if Shruikan shows up again, the Varden will scatter “like so many frightened mice”. Right. Like a herd of mice. Like mice, migrating together in huge numbers.

Eragon looks over at the Varden’s camp and sees Saphira’s shape and a perfect replica of himself. See, the Elvish magicians are conjuring up a perfect replica of him to fool the enemy into thinking that he’s somewhere he’s not. It’s actually not a bad plan, although you’d think any magician worth his salt – and certainly Murtagh or Galbatorix – would be able to figure it out simply by scrying Eragon. Unless, of course, magic

The Varden attack, launching lots of things over Uru’Baen’s walls. FakeSaphira flies in and destroys things until they engineer a fake “accident” and she breaks a wing and falls to the ground. A moment later, Murtagh and Thorn show up and chase after FakeSaphira. Eragon casts a spell to turn himself, Elva, and Saphira invisible, and they take off. Inside the Varden camp, Blodhgarm, Arya, and ten elf magicians are waiting, tied to a log. They throw the log into the air and Saphira catches it and flies, lifting them all off the ground as they head into Uru’Baen. Saphira’s gotten awfully strong, hasn’t she? Able to lift a sizable log and thirteen and a half people all at once?

As they pass over the walls, Galbatorix’s magic makes them turn visible again, which doesn’t actually matter. They land inside the walls and run over towards the gate to the citadel. Arya turns her spear into a blowtorch and begins cutting through the iron gate, essentially doing this.

Once the gate is open, they use the Dauthdaert, one by one, to walk inside the gate into the citadel. The Dauthdaert protects them against the wards Galbatorix has set up, apparently? Why? No real reason. I mean, it used to belong to Galbatorix, but as I recall there has been no mention of it possessing mystical powers that allow the owner to pass through magical wards. In fact, that’s astonishingly stupid. If you’re going to give a magic dragon-killing spear to someone and then send them out to fight the Varden, the very people who want to kill you, and there’s a very strong chance they could be killed or captured and the Varden would have that spear, doesn’t it make more sense to remove this loophole from either the spear or your magical wards?

Anyway, the loophole exists for plot contrivance reasons and now they’re all inside.

A boy comes to tell Roran it’s time. Neither he nor Katrina have slept. I’m not sure what this means. He armors up and Katrina gives him some bread, cheese, and tea. He ignores the bread. Probably a wise decision, it’s not like he’ll need those carbs!

He joins the group of men, Urgals, and elves under his command. We learn that Roran doesn’t care for or trust the elves because they’re too different. Although the only reason they’re even there is to help protect his group against Galbatorix’s magicians. That’s awfully nice of them.

Roran spends a few minutes thinking about how it’s finally down to this. The Last Battle. The Final Countdown. The Last Alliance of Men and Elves. This will be it: after today, there will be no more battles. Unless, of course, Uru’Baen doesn’t fall on Day 1 of the fight or the battle lasts for more than 24 hours. But how likely is that?

They creep towards the walls until they’re spotted and the alarm sounds, and then they charge forward. Roran decides he’ll be the first one up the ladder and up he goes.

He was less than a yard from the battlements when a soldier with blue eyes leaned over the edge and looked straight at him.

“Bah!” Roran shouted, and the soldier flinched and stepped back (page 628).

Okay. Let’s imagine you’re a soldier on the battlements. Enemies are attacking and slamming ladders against the walls and climbing up to try and kill you. Wouldn’t you, I dunno, get a spear and stand there, explicitly waiting for them to get to the top so you could ram the spear into their throat? Or at least anticipate it so when he gets to the top and baas like a sheep you don’t jump backward because you’re so surprised…when you know for a fact that this is coming.

Also, it’s dark out, I find it extremely unlikely that Roran can tell what color a soldier’s eyes are.

Anyway, this gives Roran the time he needs to jump over the battlements onto the wall. He gets stabbed, but Eragon’s magic stops the sword from actually penetrating him, and he kills the rest of them handily, then looks around. The Varden are reaching the top of the other ladders but few are actually clearing the wall because there are clumps of soldiers at the top of every ladder waiting to kill them. Unlike the soldiers at the top of Roran’s ladder, because he’s Special.

Maybe if he’d taught the rest of them his Sheep Trick this wouldn’t have happened.

All the soldiers on the top of the wall have been made unable to feel pain which makes it twice as hard to actually kill them. Setting aside the dubious logic behind this, when Roran fights normal enemies without this magical lack of pain, he’s an Unstoppable Killing Machine that isn’t wounding his enemies and leaving them to slowly bleed out, he’s murdering the shit out of them, usually with a couple of blows. However, here it’s suddenly slightly more difficult.

Except it isn’t, really. It’s just Roran and one other chap from Carvahall, Baldor. Together, the two untrained peasants managed to brutally kill about twenty-five trained soldiers while suffering minimal injuries, until more of the Varden gain the top of the wall.

He sees Thorn and Murtagh swoop overhead, then there’s an enormous crash, a bunch of water jets up into the air [???] and the main inner gate collapses. The soldiers panic and run. Hooray! That was easy!