Helpful piece of advice: Your book doesn’t need both a preface and a prologue. In fact, a lot of the time they don’t really need either.

Tesch explains that Maya and Joey realize they aren’t safe anymore when thirteen airships arrive in Oceanside, looking for the Key to the Underworld. Then a messenger arrives asking them to come to the city in Mundan.

Keep in mind that all of this is going to happen in the next few chapters. Tesch is essentially spoiling her book. For reasons I’m not aware of. This is roughly akin to Tolkien beginning The Hobbit

Bilbo Baggins, a hobbit, is surprised when Gandalf the wizard and a group of dwarves show up at his house and hire him to accompany them as a burglar to help reclaim their stolen gold from a dragon.

In a hole in the ground there lived a hobbit…

It just doesn’t make sense to spoil what’s going happen. Tesch, however, does not seem capable of grasping this rather obvious fact.

Tesch goes on and talks about how last time, they heard about some shiploads of gold disappearing and so on and so forth. Which, fair enough. If she really wanted to include a preface, all it needed to do was state that information. Overall, though, it’s just a waste of a page.

Plouton, Apollyon’s younger son, secretly meets up with the two remaining Titans, Orphilios and Marcarios. They’re planning to assassinate Abbadon. Tesch follows this with several paragraphs of description that are actually pretty well-written. So well-written, in fact, that it does not sound like Tesch. For a moment I was worried that Tesch had drastically stepped up her game and wouldn’t be ridiculously easy to mock any further, and then she gets back to her old style a moment later once the dialogue begins. I’m guessing her editor rewrote that passage. Extensively.

Plouton replied, “I know that this meeting is important for us but why did we meet at this disgusting and stinky place at the end of the world?” (page 3)

The Titans explain that Plouton just needs to bring Abbadon to this cave, and they’ll forge him into the iron. I’m not certain you can forge a person into iron, as flesh tends to smush when you hit it with a hammer, but okay.

“We will chain him to these fetters and command our vultures to feed only on his liver because his liver will grow back again.” (page 4)

Let’s assume that these vultures are really well-trained and that Abbadon’s liver will actually grow back. Even with those out of the way, I don’t think Tesch has a good grasp of human anatomy. You see, to get at his liver, they’d have to claw or chew their way into Abbadon’s abdomen. Which would kill him. Maybe not immediately, but when you have a gaping hole in your torso, sooner or later it’s going to kill you.

Anyway. Plouton agrees, and that’s the end of that. If this is anything like the last book, this entire scene will show up later in the book, rendering this entire preface pointless.

Chapter One – We Need Results!

Abbadon, meanwhile, is quailing under his father’s anger. So apparently Abbadon has suddenly become terrified of his father since the last book.

Apollyon is not particularly happy that they’re still working on finding Maya and Joey’s exact location.

The ruler of the Empire of Evil looked downcast and depressed although his powerful voice floated with pressure into the minds of his sons, Abbadon and Plouton (page 7).

Wait. So he’s screaming angry but he also looks downcast and depressed? Which is it, Tesch?

Plouton, however, realizes Apollyon is pissed with Abbadon, and sees an opportunity. He asks Apollyon to put him in charge.

“To you? Why should I give the command of this important rescue mission to you?” (page 9)

Plouton explains that he wants to bring in Sutornia and Cassandra, a couple of powerful beings, who can also operate inside Maya and Joey’s world. How Plouton knows this, I have no idea. Apollyon looks at Plouton and suddenly wonders if he’s made a mistake in choosing Abbadon as his heir.

“What a terrifying mistake that would be…” he thought, “Maybe I should have developed over time a better relationship with my young son.” (page 9)

If Tesch is going to have our main villain devote this book to working on his relationship with his son…that would actually be fucking hilarious. You know, Apollyon is actually a much richer, more developed and interesting character than Maya or Joey. We know that he cares about nature, loves unicorns and mermaids, has a fine singing voice, and cares about his sons. Aside from wanting to enslave the world, he doesn’t seem like a bad chap. And his desire to kill Maya and Joey only makes me like him more.

Plouton finishes up his plan:

“We have to involve under all circumstances the principalities Sutornia, Cassandra, and their co-workers and move on as a united power team and not as a one man operation if we want to recover the Key to the Underworld.” (page 10)

Which is all well and good, except the Powers of Evil have never been operating as a one-man operation. Actually, they haven’t been operating as any kind of operation at all. They’re remarkably uncoordinated and mostly tend to march around and randomly attack the good guys.

King Apollyon tossed his copper colored hair off his shoulder with a flick of his head (page 10).

So basically he does this.

I am so intimidated by how evil he is.

Anyway. Apollyon thinks this is a great idea. And Abbadon, surprisingly, isn’t bothered at all by his brother butting in and taking charge. Abbadon is totally cool with it. Very mature of him. But, as we know (and as Tesch tells us…again…because we didn’t get it from the last scene of Plouton plotting to kill him) Plouton actually hates Abbadon and wants him to die. 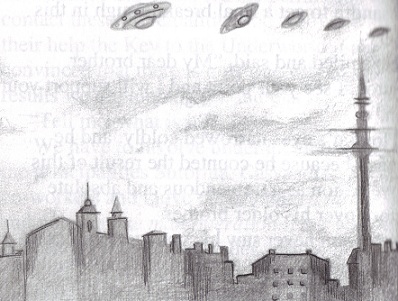 Maya and Joey are relaxing and eating dinner with their family while they watch the six o’clock news. Suddenly a breaking news report comes in with a reporter who explains there are thirteen UFO’s hovering over the beach in Oceanside. People at the beach are jumping around screaming about how the aliens are visiting them.

Then one of the UFO’s comes down to a hundred feet up, a trapdoor opens, and two figures get out and hover in midair. They float away towards Oceanside. Everyone is shocked because the creatures don’t have any heads.

Personally, this wouldn’t bother me much, because they’re aliens. Why should we expect them to even have heads where we have heads? And even if they don’t have heads, who cares? They’re aliens! That just makes them even cooler.

Then, a bit later, they see the creatures are carrying their heads in their hands. Awesome! But for some reason this freaks everyone out even further.

Maya and Joey quickly confer. Joey says the airships have to be looking for them to try and recover the Key to the Underworld. Yeah. The key that Genarius told you to get rid of? That one.

Their parents reassure them that it’s just a hoax or atmospheric light reactions. Maya and Joey pretend to believe them, but then a news anchor comes on and assures everyone that it’s not a hoax, that the Air Force has been summoned, but whenever they get close the UFO’s vanish.

Maya and Joey head up to the attic to have a talk. Joey exposits:

“We have to sleep with our Tarnkappes on because the rulers of the Evil Empire might feel our presence, but they cannot detect us.” (page 17).

So…correct me if I’m wrong…but isn’t feeling someone’s presence kind’ve the same as detecting them? Also, if you’re sleeping with your Tarnkappe on, isn’t there a chance one of your parents might come in to wake you up in the morning and see an invisible shape lying under the covers?

Maya explains that their parents think she might be ill because apparently Maya hasn’t adjusted to living on Earth.

“Like last week, Mom asked me if I wanted to drive to the grocery store with her and I answered, ‘Did our servants prepare the unicorns for the trip?’” (page 18)

I wasn’t actually sure just how long they’d been in Maradonia on their first trip, so I went back through Maradonia and started counting it up. It was pretty difficult, because it’s evident that Tesch did not pay attention to how long this would actually take. Accordingly, there isn’t any clear passage of time. In fact, I think that the first 26 chapters all take place on the same day, which is pretty difficult, considering how much happens, but Tesch never describes the day passing or Maya and Joey sleeping anywhere. It’s just daytime, from chapter to chapter.

Tesch also doesn’t give accurate time frames, opting for lines like “They rode for a long time”, but from my best estimate, they spent 59 days in Maradonia.

And they were made Prince and Princess 44 days into their trip, so they only spent TWO WEEKS as royalty…and at least half of that time they were by themselves. And yet Maya is so used to living with servants and riding on unicorns that she isn’t able to adjust to being back home? Somehow I have a hard time believing that. It might be plausible if Maya had spent six months being waited on hand and foot, and even then it wouldn’t feel realistic. Humans are actually pretty adaptable, it doesn’t take very long to settle into a new routine. Yeah, the first couple days back home would be kinda weird, but after that Maya would adjust back to her normal life…which she has spent fifteen years living, rather than two weeks in Maradonia.

Anyway. As Maya and Joey are talking, their mother comes up and she overhears Joey whispering about all the shit they brought back with them and how Maya is really the Princess of Maradonia. This confuses her, so she decides to figure out what’s going on.