Maradonia™ and the Gold of Ophir » Part 16: Their Sheep Turned Green

We get a description of Mordock. He’s short, wears a bright red robe with a hood and red mask.

He hated the kids in the villages around his castle and he played tricks on them whenever he could.

Count Mordock was a thief and he loved to steal the children’s toys and his specialty was to break into the hen houses of the villagers, stealing geese, ducks and chicken (page 527).

So I think that’s supposed to be ‘chickens’ rather than ‘chicken’, but setting that aside, this guy is rich enough to own his own castle and he spends his time stealing toys and breaking into hen houses? Sure, I can buy into the idea of a rich guy stealing for the hell of it, but hen houses? Where is the sport in that?

Mordock practices magic in his spare time and then tests spells in the villages:

Anyway, a messenger arrives from Dominatio and invites him to a conference on Villusio Island. Mordock asks some questions and then the messenger makes the mistake of calling Mordock one of the leading wizards in the world. Mordock is insulted, so he summons some wind that picks the messenger up and torments him for a bit and eventually asks if the messenger wants to be turned into a dragonfly or a spider. Before the messenger can reply, Mordock decides that dragonflies are prettier, so he turns the messenger into a dragonfly, traps him in a jar, and then pokes a couple holes in the lid.

The count started dancing around the glass jar on the floor and uttered, “Dominatio…Dominatio and your wand, who is the most powerful wizard in the Land?” (page 532)

Seriously? Fucking seriously? I mean, okay, you rip off Snow White and the Seven Dwarfs, fair enough. And yeah, there’s the fact that it doesn’t rhyme. At all. But…you have a count in a red dress dancing around a glass jar that contains a guy he just turned into a firefly, making rhymes about a wizard’s wand? Seriously, Tesch?

I really hope this scene makes it into the movie.

Mordock decides he’s going to turn Dominatio and Melchisedek and Yogananda into cockroaches, and the chapter ends.

Surprise! It turns out that Maya actually followed the messenger in her invisible state and was watching the entire thing, on Dominatio’s advice, because he doesn’t trust Mordock.

The Count was not only a strange man, short and slender, but he was filled with pride. And mostly, he used his own version of the ‘Triple P’…Power, Passion and Poison to reach his goals (page 535).

As Mordock journeys, he has the odd feeling that someone is watching him, which Maya is. Eventually, Mordock notices fresh footprints which worries him, but he decides that it doesn’t actually matter.

Mordock then launches into a two-page speech about how awesome he is and how he’ll turn Dominatio into a cockroach and keep him in a glass jar on his shelf and it will be awesome and he’ll name Dominatio ‘Kakalaki’, which is cute. Then he gets up and dances again.

They arrive at a coastal city near Villusio Island. Some children are following the carriage demanding that Morlock prove his wizardliness, but Morlock gets angry and decides to prove why it’s a bad idea to piss off a sorcerer with anger problems.

He lifted up his arms and cast a heavy cough spell on them (page 540).

The children start coughing and can’t breathe so they all run away, and Morlock screams after them that if they ever piss him off again, he’ll turn them into woodpeckers [???].

Maya jumps off the top of the carriage and grazes one of the horses with her elbow and spooks it. Okay, this calls for an illustration. 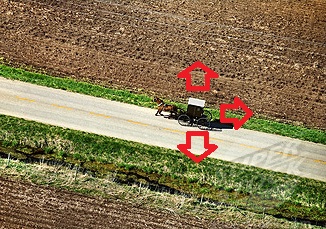 So you have a carriage. The nice things about carriages is that the horses are only at the front of the carriage, so you have three excellent angles for if you need to jump off the roof. Now, if there’s nobody behind you, most people would probably jump off the back, because there’s no chance of accidentally getting tangled up in the wheels if you slip on takeoff. However, if that doesn’t work, leaping off the left or right side is nearly as good: as long as your legs are decent you’ll probably be able to pull it off successfully.

So, what does Maya do? She does exactly what you’d expect: she leaps off the carriage TOWARDS THE FRONT and hits one of the horses as she does so.

And let’s not forget that she’s wearing the Tarnkappe while she does that. The magical Deus ex Machina hat that lets her clear tall buildings in a single bound? Yeah, that one. And she can’t jump more than a few feet.

Anyway, this entire scene doesn’t lead to anything, so it was pointless. Tesch throws in a ‘And so it was…’ and Maya heads off to Villusio Island on a ferry. She meets up with the three wise men but they tell her she doesn’t need to explain anything that happened because they’ve already seen it. Turns out that Melchisedek blessed Maya by touching her forehead before he left. As he explains this, Maya suddenly realizes that Melchie looks a bit like AstroJesus:

A warm shower rained down her spine (page 545).

Melchie rambles for a bit and eventually reveals what happened when he blessed Maya with the spirit:

That’s a little creepy and disturbing. So Melchie and his cronies were sitting there listening in when, say, Maya stopped to pee? And they put this on her without her permission? I kinda expect Maya to go all Jadis on them, but she thinks nothing of it and they move on.

Emoogie then pipes up and says he thinks Maya has the answer to their problems, because she can turn invisible. Plus, the best way to solve the problem of having a powerful sorcerer that wants to kill you is to teach him a good lesson. So: Maya will be invisible and they’ll give her a big mirror. Then, when Mordock gets there, he’ll cast a spell towards Dominatio to turn him into a cockroach, but invisible Maya with her invisible mirror will jump between them and reflect the spell back to Mordock which will turn Mordock into a cockroach. It’s foolproof!

“I am totally convinced that Maya will do this at the right moment and that her timing will be perfect as usual.” (page 550)

You have far more faith in Maya than I do.

“Be prepared my friends… have a big glass available, grab the cockroach and close the lid. Cockroaches love bread. Have it available to feed the sorcerer.” (page 550)

Then, they’ll keep him alive in a jar and talk to him for awhile and see if he’ll give up his anger, pride, and evil powers, and join the side of righteousness, because there is no possible way that Mordock might be furious at being turned into a cockroach and then kept inside a glass prison and fed only bread and then swear to devote the rest of his life to brutally killing each and every one of them.

They ask Maya what she thinks of the idea, and she’s totally on board:

“Basically it makes a lot of sense to me to carry an invisible mirror and protect the wise men from any harm.” (page 552)

Of course it does.

That’s a great chapter title. It’s almost a pity no punches are thrown in this chapter.

Mordock gets to Villusio Island and is so happy that soon it will all be his that he breaks out in a little dance. You know, Tesch really struggles at making her villains…scary.

After some more nothing, Mordock gets inside the castle and Dominatio greets him eloquently and then asks where the messenger is. Mordock explains that he turned him into a dragonfly and pulls out the jar. The three wise men are very impressed and the Dominatio says that while the magic required to turn someone into a dragonfly is pretty awesome, Mordock won’t get any real credit from them unless he can turn the dragonfly back into a man. Mordock takes the bait and changes him back into a man. The messenger starts screaming about how evil Mordock is and runs away.

Dominatio asks Mordock what his real motives are and launches into a speech about how he’s not very nice. Mordock is unfazed and starts monologuing about how he’s incredibly powerful and then he tells them that he’s going to turn them all into cockroaches. Okay, here’s a tip, Mordock, and I won’t even charge you for it. If you’re facing off against three powerful wizards and you’re planning on turning them into cockroaches, it’s a good idea to try to maintain something I like to call “the element of surprise”. What that means is that you don’t fucking tell someone you’re about to turn them into a cockroach, you just do it.

Maya, of course, uses this audio cue to step between them with the mirror. Mordock casts the spell, it hits the mirror and rebounds, and Mordock is cockroach’d. They grab him, stick him in a jar, utter a few dramatic Ice Cream Koans, and that is that.