Maradonia™ and the Gold of Ophir » Part 10: The Sunny Side of Life

I can already tell this chapter is going to be interesting.

Inspector Coleman walks around the rose garden and thinks for a page. It’s not particularly interesting. Essentially, he’s wondering about the disappearance of the ships and how Gertrude and Candace might be involved. The investigation is going nowhere, but coincidentally just then one of his informants shows up with news. The informant saw Mr. Snowblitz talking to Candice and Ginger and relates the conversation.

“I assume it was Candice who broke or grabbed a flower, a rose, and said, ‘Mr. Snowbird…’

‘Yes we know… but your codename for us in all of our conversations is Snowbird.’” (page 253)

Someone should tell Gloria Tesch that villains who cannot even remember their code names aren’t particularly frightening.

Anyway, apparently Candice then told Snowblitz to make sure everything went according to plan (although, surprisingly, they didn’t give away what the actual plan was) and closes with a threat:

The informant takes off and Coleman reflects on what he’s learned about Snowblitz:

“I always though [sic] that the name ‘Snowblitz’ does not quite suit your character! You have more the attitude of a bird, flying from one branch of a tree of opportunity to another one and looking here and there for food.” (page 255)

I’m really not feeling that comparison. Coleman decides he needs to have a serious chat with Snowblitz.

Maya and Joey get up and have a delicious breakfast:

Joey felt so much better. His life threatening experience during the Basio Cyclone was nearly forgotten and he was ready to move on (page 256).

Yep. All he needed was a good night’s rest and that life-threatening experience is practically forgotten.

Maya and Captain Henry share a Moment, and General Goran gives Maya and Joey a couple bags stuffed full of money, because writing is always easier when you remove all obstacles in the way of the Heroes. Maya heads back to her room but randomly happens to overhear two men whispering about an informant seeing one of them. She then realizes it’s Snowblitz and Coleman [!!!], who head into Coleman’s office. Maya goes and fetches her Tarnkappe and slips into Coleman’s office before he shuts the door.

Coleman explains that Snowblitz was seen meeting Candice, and that of Goran catches even a whiff of Snowblitz being dirty, he’s dead meat. However…if he tells Coleman what’s going on, Coleman will keep it secret. Snowblitz sweats for awhile but eventually pulls out a bottle of snake poison and reveals the plan is to poison Maya and Joey. Coleman tells him that he’s insane and if he actually poisoned Maya and Joey they’d be fucked. He then takes the poison, and tells Snowblitz that he has a job for him: he needs Snowblitz to break into Joey’s room and root through his backpack and find a small metallic object (ostensibly, the Key). Coleman says this is because he thinks the object might be stolen so it’s his duty to investigate it. Snowblitz agrees and takes off.

I guess I should give Tesch some credit for actually introducing a bit of intrigue into the story. But you know what would have been actually good storytelling? Including this scene from someone else’s point of view, so Maya and Joey don’t know exactly what’s coming. Then the reader might actually be concerned that something bad could happen.

Maya left the building, very concerned about their future (page 265).

She finds Joey and tells him to head back to his room and secure his backpack because people want to steal it. Joey immediately takes off and comes back a short while later with his backpack over his shoulders, smiling because nothing was missing. Um. Okay. Hang on a second. Let me get this straight:

The Key to the Underworld is essentially this story’s One Ring. It’s an immensely powerful object that pretty much every single Evil person in the entire world wants to get their hands on, and while perhaps it’s not as crucial to defeating the Club of Evil as the Ring was to defeating Sauron, it’s still a pretty big deal. If Apollyon were to get his hands on it, it would be a devastating blow to the Good Guys and could easily turn the war against them. Keeping the Key safe should be first on Joey’s list of priorities.

And he leaves it behind? In his backpack? In his unlocked room? Shortly after being EXPLICITLY TOLD THAT THEY HAVE ENEMIES SURROUNDING THEM AND THERE ARE PEOPLE WHO CANNOT BE TRUSTED?

I’m probably starting to sound a bit like a broken record, but the Encouragers are without any real doubt the stupidest fucking heroes I have ever encountered, and I sporked all 10 books in the Seven Sleepers series.

This needs to become my go-to response. Any time something retarded happens, I’ll hit a button that will send an email to Gloria Tesch that just says “Gloria, what is this nonsense?!”

Maya explains the entire situation for Joey’s benefit, and of course Gloria spends a page and a half of Maya telling Joey instead of a one-sentence “Maya told Joey what had happened”.

Eventually they arrive at the harbor and the Encouragers decide to send Captain Henry, Danny (who have both come with them for reasons that aren’t clear) and their security guards to find the Spelunka Tavern while they check out the Lighthouse. Captain Henry enthusiastically agrees that sending Maya and Joey off by themselves without a single armed guard is a brilliant idea and they part ways.

Maya and Joey put their Tarnkappes on and go to the Lighthouse. Tesch spends two solid pages describing the scenery as they stand on the balcony at the top. Maya raves about how gorgeous it is, but eventually Joey brings the topic around to the lighthouse blackouts and asks the question on everyone’s mind:

“Was the blackout accidental or was it planned and organized by the enemies of King Genarius?” (page 271)

Well. Let’s consider the facts. The nights of the blackout were also the exact same nights that immensely valuable gold ships all mysteriously vanished without a trace. And the guy who runs the lighthouse has been seen cavorting with Candice and Ginger who you know for a fact are traitors and enemies of King Genarius. So yes, I kinda suspect it wasn’t accidental.

Maya and Joey head towards the cottage and overhear a screaming fight between a man and a woman. The fight lasts for two and a half pages which is about two pages longer than it needed to last. Essentially, the woman thinks the man is cheating on her because she’s seen him chilling with ‘these two pretty ladies’, who I assume are Candice and Ginger, so she’s going to go visit her mother. The man protests that they owe him money, which he has to collect so he can pay for medicine for their sick daughter, Theodora.

Maya and Joey sneak inside. The parents are feeding Theodora chicken soup. She talks about how she’s been hearing voices telling her that she’s going to die. They encourage her for another few pages and finally Feluchi, the dad, leaves to get his money. Maya and Joey follow him into town but can’t make it inside the house.

That was not a problem for the siblings because they had the opportunity to look through one of the windows and listened conveniently to the ongoing conversation from the outside (page 277).

I have to agree with Tesch. That is awfully convenient.

Maya immediately recognizes the voice as belonging to either Candice or Ginger. Whoever it is thanks Feluchi for letting them borrow the lighthouse and they give him a sack of gold coins. He’s delighted and takes off. Feluchi hires a doctor and takes him home, where he bursts inside and runs to his daughter’s bedside, happily telling his wife that there’s nothing to worry about as he’s brought the doctor with medicine to heal his daughter. Psych! Turns out his daughter died just before he got home.

I’m actually kind of a fan of this. I’m sure that Tesch secretly intends for there to be a Message in there about not doing the wrong thing, even if it’s for the right reason (such as saving your daughter’s life), but she doesn’t actually say anything about the message, making it a rather pointless and kind’ve heartbreaking death, which I think we can all agree needs to be in children’s books. 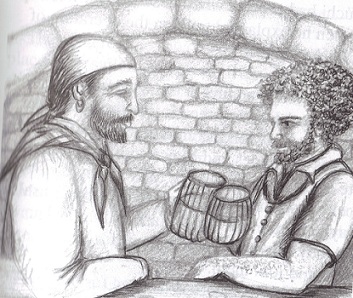 Joey is delighted, because now they have proof that Candice and Ginger are guilty. Okay, technically it’s just his word against theirs, but that’s almost as good.

They head over to the Spelunka bar. Inside, they find Captain Henry, Danny, and their guards drinking and having a good time with a bunch of soldiers, which is awesome because Danny’s about sixteen or so. Maya and Joey wander around, invisible, and randomly overhear some people talking about eliminating people who survived a shipwreck. One of the guys hires the other guy and they agree to split the profits.

The two men cheered with their beers, “Cheers my good friend, we are a team!” (page 284)

I want Gloria Tesch to write a movie about the Mafia. I have a feeling the dialogue she would give them would be so bad it would transcend time and space and curve around until it was almost good but actually it would just be bad again.

About that time two well-dressed ladies enter the bar. Captain Henry, Danny, and the guards all leave. The ladies drink for awhile and finally go into the back corner to meet the two guys who were just planning the murders. Maya and Joey also notice that Candice and Ginger (for it is them) are being followed by two of Coleman’s surveillance team.

Candice and Ginger pay the hitmen, who ask what they should do with the bodies when they’re done.

“Man, think! Get a rowboat and throw the bodies over board behind the Agunda Reef as food for the hammerhead sharks.” (page 288)

Because when I think of Candice, I think of someone who refers to everyone as ‘Man’.

Suddenly Snowblitz shows up and delivers the surprising news that Maya and Joey are going to be visiting the beach to investigate the missing gold transports. He also tells them that Coleman is secretly investigating the Encouragers. Candice and Ginger are delighted with the news and give Snowblitz some gold. Snowblitz goes up to the bar for a drink:

Mr. Snowblitz looked at the bartender and muttered, “It is a smart thing to have friends on both sides and spy for the police department as well as for Candace at the same time. It is the right decision to stay on the sunny side of life.” (page 290)

Coleman’s two surveillance people realize that Snowblitz is working for Candice and Ginger so they leave to report this to Coleman. I love how we’re jumping randomly from POV to POV. We’ve been inside at least five different character’s heads in this chapter alone.

Candice and Ginger give the hit men another job: they are to wait until Maya and Joey and the pearl diver all go underwater, then destroy their boat. After they come back up, they need to kill all three of them. If they succeed, they’ll get a thousand gold coins. And with that, the chapter ends.

Whew! Good thing Maya and Joey overheard everything and now will have no problem outsmarting the hitmen. Just think of how much likelier it would be that they could die if they DIDN’T know exactly what was coming. There could be some actual tension in this book!