Maradonia™ and the Gold of Ophir » Part 14: The Darkness Is Dark

Chapter Forty-Four – The Coin of Immortality

If Maya and Joey become immortal in this chapter, I’m going to kill something on general principle.

There’s a party. It consists of nothing happening for awhile. Eventually, King Pergamon’s doc shows up and informs Joey that Pergamon might not live through the night. Apparently, he gave the doctor three gold coins to give to Joey. After Pergamon bites the dust, Joey needs to put a coin over each eye and put the other in Pergamon’s left hand. Why? Well, it’s tradition, apparently.

Joey talks to Maya, because the image on the coins are the same as the coins they got from the bottom of the ocean. Holy shit, what an incredible coincidence! What are the odds that they would stumble across two pieces of the same kind of money among two countries that do a great deal of trading with each other? Well…actually, I’d say the odds approach 100%.

Over the course of several pages, the doctor explains that with the third coin, when Joey dies, he has a chance to attain immortality by doing something. Also, there are Eight Immortals who live over in Maradonia and know stuff about immortality. File that one under Obvious Foreshadowing.

That night, Pergamon is dying and sends for Maya and Joey. Despite the fact that he’s hacking up blood like a TB patient, he still smiles when they walk in.

Joey was so emotionally touched by the situation that he could not hold back his tears. He cried like a little boy who had lost his mother in an accident and could not stop (page 418).

As moving as this is…actually, it’s really not very moving. Joey has known the king for what, 36 hours? They’ve spent approximately 20 minutes speaking to each other? There is a very large difference between your mother dying and someone you’ve just met dying.

Joey launches into a speech about how every time they’ve built a strong connection, it ends. He cites AstroJesus as his example for this, but I can’t help but think about Genarius, General Goran, or Hoppy, or Danny, or Captain Henry, or the mermaids, and the unicorns. Admittedly, they haven’t built strong connections with anyone, but they’ve built far stronger connections with these characters than with AstroJesus or Pergamon.

The darkness is pretty dark.

Pergamon dies. And with that, suddenly Tesch starts referring to Joey as King Joey. Tesch throws in a ‘And so it was…’ and funeral arrangements start being prepared. There’s an open-casket funeral, everyone is totally psyched about a foreigner as their new king, and finally Joey gets up to address the people and explains that he has an idea: instead of the ceremonial burning of Pergamon’s body taking place on top of the mountains, as is the custom, he’s going to do it down in the city so everyone will have a chance to be a part of the funeral. Um…okay. The average person is going to have precisely the same “part” of the funeral regardless of where it takes place: absolutely none. They’ll be able to watch the fire flickering and that’s about it. It’ll be a bit closer, and a bit smellier.

And how does everyone react to their new king waltzing in and breaking hundreds, if not thousands of years of tradition? Well, exactly the way you’d expect for a book written by Gloria Tesch: everyone loves the idea. There isn’t even a minority group of holdouts. Every single person is immediately on board.

Joey gets up and tells the crowd the story of how Pergamon made him king, which basically consists of Tesch rehashing the story that already took place. Apparently Joey is able to recall the conversations that took place word for word.

There’s a picture of a naked baby here. It’s a little weird.

A few days pass. Maya’s been having dreams where Libertine shows up and tells her that Maradonia needs her. In the dream, Prince Michael (Genarius’ son) is in danger. Maya also saw Felipe plotting to “take care” of Michael, because her dreams are just that helpful. Things can’t be left murky or unclear, because not knowing precisely what will happen before it happens leads to tension, which has no place in this book. Anyway, Maya wants to head back home ASAP.

King Joey looked for a long moment over the tops of the mountains before he said, “Maya, remember my words… I will always do what you ask me to do when it seems right to me” (page 429)

Or, in other words, he’ll only do whatever he feels like doing.

They make the preparations and Maya takes off on dragon-back with Goran, Edmund, and Henry. After a few pages of nothing happening, they land in Selinka. King Genarius is delighted to see them, and they have dinner. Afterwards, they kick everyone out for a private conference. 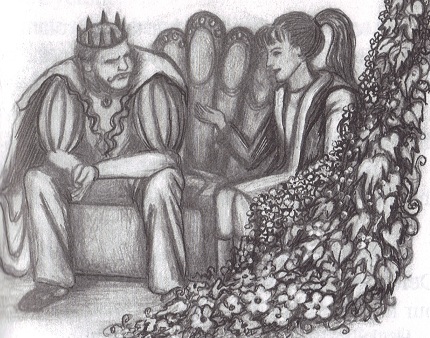 Genarius has an awesome ’stache.

They go in to visit baby Michael and Maya flips her shit over how cute he is. The two nurses snicker at Maya.

Maya looked at the nannies and asked them, “Is there something amusing, nurses?”

If by ‘power’ you mean arrogance, then sure, Tesch. What, precisely, is this scene supposed to demonstrate? That Maya doesn’t have a sense of humor? That she gets angry of anyone who doesn’t show her absolute respect? What a bitch.

Finally they get down to business. Genarius feels guilty. Apparently, he was tipped off about several meetings in different cities of groups that were against him. Genarius put on his Tarnkappe and went to the meetings, invisible. Both times, he got pissed, pulled out his sword Titus, and slaughtered over a hundred people [!!], but was unable to catch any of the ringleaders. He feels guilty because he’s certain that he killed some innocent bystanders. Which doesn’t really make sense…if he was inside a room of people plotting treason against the king, how did he kill innocent bystanders? Maybe he went into a berserker rage and stormed outside and killed some people at the bagel shop down the street or something.

Anyway, Maya has just the speech to cheer him up: the Collateral Damage speech. You’ve all heard it before. Essentially, in any war, innocent bystanders will be killed, so don’t worry about it, because it’s not your fault. Genarius is still a little worried, so Maya steps up her rhetoric:

“In my opinion, all these people who are part of this conspiracy against the kingdom of Maradonia and the royal family have to pay with their lives. That is the law! Let me tell you one more thing… If you have a problem, killing these people with the sword… give me Titus! And, my King, I will finish your job with my own hands” (page 452)

Up until now, I thought Maya was just an idiot, whereas Joey was pure sociopath, but after this…they’re both sociopaths. No doubt in my mind.
Genarius is of the same mind…sort of. He’s shocked to hear Maya’s words, probably because she’s the most callous fifteen-year-old girl he knows, but doesn’t really have a problem with what she says.

Maya has a minor confrontation with Michael’s nurses, but she talks down to them until they quail under her arrogance. She then talks with King Genarius about palace security, because apparently a 15-year-old girl from Florida has a better mind for security than a career soldier.
They chat about the upcoming Blood Red Moon. It’s not particularly interesting, except the part where Genarius names the planets – Venus, Mercury, Sun, Jupiter, Saturn, Mars, and the moon. Uh…okay. So the planets here just happen to have the same names as the planets back on Earth? Or is Tesch trying to say that Maradonia exists on the same plane of existence as Earth?

Maya puts Prince Michael to bed. As she leaves, she meets a woman who I don’t recall. Anyway, the woman explains that she has a bad feeling about Michael’s nurses. But it turns out the nurses are listening to the conversation. They decide that Maya is too suspicious and they’ll need to finish the job quickly by giving Michael a big piece of apple. He’ll choke on it and die and nobody will be able to blame them! Actually, considering that their only job is to protect the prince and keep him safe, I imagine they would be blamed. With extreme prejudice.

Later, Henry and Maya go out for a walk. Tesch throws in a ‘And so it was…’ to keep me properly buzzed and then Henry talks about how beautiful Maya is. Finally he asks if he can kiss her. Maya says yes, and thinks:

‘Captain Henry’s skin looks perfectly smooth except for his lips that crack when he stops smiling.’ (page 465)

Uh….okay. I…honestly don’t really know what to say about that.

So they kiss. Henry is kissing a fifteen-year-old girl. Which, okay, it’s a medieval world, fair enough. Girls there get hitched at ridiculous ages. It’s still a little bit weird, especially since Tesch was writing this scene at age 14. 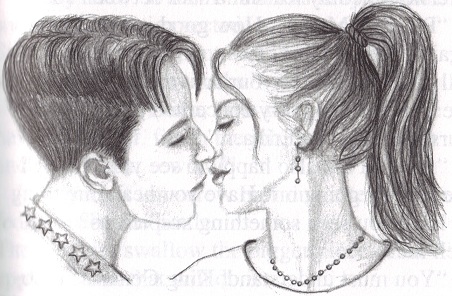 Maya looks really old here. And why is she as tall as Captain Henry?

The kiss is magical:

Maya felt different. It was like tiny little stars had exploded beneath her skin (page 465).

Which is not a terrible simile, although I would have preferred something more down to earth, such as describing Maya’s goosebumps or something. Oh well.

These chapter titles are awesome.

The nurses wake up, get an apple, and head into the nursery. One of them, Emily, feels bad about killing a baby. She’s being blackmailed, and if she doesn’t murder the prince, her own family will be harmed. So she jams the apple into his mouth. Michael chokes, turns red, purple, and then blue.

Emily managed to get a smile on her face, overwhelmed with tears in her eyes (page 469).

Then Maya comes walking down the hall, and the nurses take off.