Maradonia™ and the Gold of Ophir » Part 9: My Needs and My Feelings

Chapter Twenty-Six – On the Edge of Death

Maya gets back to the beach, where Danny’s arm is starting to swell up. Apparently he’s hot like an oven, which makes Danny chuckle. Even though that isn’t a joke. I will accept that Danny knows what an “oven” is, but I don’t think that line would make a kid currently dying of poison laugh.

Maya reacted quickly, turned around and asked Joey again, “Where is the knife? I need the knife, man!” (page 221)

I need a drink, man!

Joey searches through his seawater-soaked backpack for his pocketknife and hands it over to Maya who uses it to slash open Danny’s wound. Without bothering to sterilize it first or anything. Despite the fact that there are fires all around them and it wouldn’t take more then a few seconds. Although she is about to pour Magical Healing Potion all over the wound, so I guess this isn’t too much of a problem.

Maya pours the stuff on three times and makes Danny drink the rest. Danny goes to sleep. All the natives gather around watching and waiting for Danny to die.

After they waited for a long time and saw that no harm had touched Danny’s body they changed their minds and said that Maya and Joey were magicians or healers and were sent by the gods to the land of Isobera, their beloved island (page 223).

Okay. We just established that Maya ran around asking dozens of natives if there were any healers. The NATIVES then told Maya that there was a NATIVE healer, and everyone watched Maya run off towards the NATIVE HEALER and then come back a short while later with the NATIVE HEALING POTION…and the natives’ reaction is to assume that Maya and Joey are magicians or healers?

Anyway, the big cheese of the island invites them all to stay with him. His dad is sick with dysentery – how these natives or Maya and Joey know what the fuck dysentery is escapes me – and the natives tell Maya and Joey to come visit him, hoping they can cure him. Apparently the Encouragers have been protesting their newfound fame and don’t want to go, but then Maya brings up the Miracle Swingword of Magic they learned from the frogs at the swamp.

Tesch throws in a ‘And So It Was…’ and they go visit the sick guy. They touch his forehead and speak the Swingword. Which really should be Swingwords, but that’s a little nitpicky:

‘Not everything may seem to be … what you seem to see…’ and touched the forehead of this man.And miraculously…the fever and the sickness left the man (page 224).

Yeah. It wasn’t enough that Maya and Joey are globally famous royalty, indestructible, there to fulfill a prophecy, have Deus Ex Machina hats that give them godlike powers, and Joey has a ‘key’ that’s a cross between a lightsaber, flamethrower, and grenade launcher – now they have the power to heal people. Using magic.

Maya reminds everyone that they don’t actually have healing power, it’s the word and the faith behind it, which gives me some very strong Biblical vibes, although I’m pretty sure the notion of a word having power, rather than God, is blasphemous.

Eventually they find a ship on the other side of the island in a harbor. This isn’t elaborated on, so maybe it was just a fully operational ship that happened to be abandoned on this island. They continue their journey, accompanied by several dragons. One of the dragons is white and he’s the High Priest of the dragons. Yes, the dragons have a High Priest. It gets better: His name is Emoogie.

They land in Arkadia. Maya asks Joey if he saw the shooting star and wonders if it’s a sign of good luck.

“A good sign for us? I don’t know. Several people think that we are miracle workers, magicians or even healers but Maya, we know better. We are just two normal teenagers from Oceanside who are assigned for a special mission.” (page 227)

You know, I understand why Tesch uses the normal As You Know, Bobs. It’s a quick and easy way to provide exposition and it doesn’t require any talent, making it the go-to choice for poor writers. I get that, and although it enrages me, I know why it’s here.

I really don’t know why Tesch uses these when everyone, including the reader, knows the information that’s being rehashed. We established these facts two pages ago, Tesch. I don’t care how young your audience is, if they’re old enough to make it 225 pages into your second doorstop, they have an attention span that will last for more than two pages.

Maya flips her shit, however, and rants at Joey for an entire page, talking about how they’re anything but ordinary because of all their Sue qualities I just listed. Maya says that she has a feeling Joey is afraid of something, and says he needs to meet the needs of the world. The dirty jokes are too obvious, so I’ll skip past it.

Joey, however, flips his shit right back and launches into a speech that lasts for over two pages.

Cry me a river, you sociopath.

Joey bitches about how he was seasick. And he’s afraid about the future. Maya got to enjoy the storm because Captain Henry (nudgenudge) was there with her but Joey was sick, and wet, and cold and it was very unpleasant. I have to say, I have a hard time mustering any sympathy for him.

“But Maya, can we deliver? Listen to me…Can we deliver? Can we deliver what all these people around us, here, in this world, expect from us? And this is not a rhetorical question?” (page 230)

Maya tells him he needs a hot bath, some food, and some sleep. As luck would have it, a carriage promptly arrives and whisks them off to the Villa Consalsa, the governor’s mansion, where they’ll be waited on hand and foot. Yeah, their lives are so terribly rough.

The next day they meet everyone. The governor’s name is Fernando Dela Concho. His police chief is named Inspector Coleman. And his district secretary is named Mr. Snowblitz. I swear I’m not making any of those names up.

General Goran is there as well, and they get to the point. Concho starts talking about all the shit that’s going down in Maradonia – assassinations, rebellion, and the missing gold ships. Joey jumps in and demands to know if Concho has any contact with Candace, the wife of General Felipe (who are, as you may recall, traitors). Nice and subtle, Joey. Concho says no. But Joey realizes that Mr. Snowblitz looks rather nervous and his hands shake when their names are mentioned. Whew, good thing! Otherwise we might not know who the mole was and there could be some suspense.

Anyway, Candace rents a house in town and is friends with a woman named Ginger, and they’re both friends with a chap named Feluchi who operates the lighthouse. And, in a quick and effortless segue, it turns out that Mr. Coleman (who apparently is a very famous investigator) has a feeling that something strange is going on. Wow. He sounds like a great investigator.

Coleman says what a great honor it is to meet them and starts asking them questions about how they got into Apollyon’s palace undetected, freed the unicorns and mermaids, and what’s all the stuff about the Key to the Underworld. Joey says that now is not the time or place to discuss any of this. Joey asks him where he heard about the Key, and Coleman says he hears lots of rumors, because he’s the chief of police!

Maya and Joey go through the story of what happened to them and dispel a few rumors. Coleman asks them if they lost their backpacks during the ordeal, and Maya says no…obviously they didn’t, because they’re wearing them. And then she Wonders, internally, Why Coleman is Interested in the Backpacks. Foreshadowing!

Coleman explains that Candace and Ginger have secret meetings with the dregs of society in the bar called Spelunka, which is where the criminals all hang out. Maya and Joey are astonished because they know all about Spelunka because Oraculus told them about it, which they tell each other, even though both of were there and remember it. They remember it very well, actually, and are able to quote what Oraculus said word-for-word, even though Oraculus talked for pages.

Concho is speechless, and then he asks Maya and Joey how they know about Spelunka. Which is odd, because they just said how they know.

“It was Oraculus who told us about the Spelunka” (page 238)

The lack of thought that has gone into this book astounds me.

Anyway. Joey has a response for Concho:

“We have our connections, Governor,” Joey uttered (page 240).

That’s the second time in this section Tesch has used the word ‘uttered’ and both times it was ridiculously out of place. Admittedly, there really isn’t any time, I think, when ‘uttered’ is appropriate.

Snowblitz has been getting more nervous and he excuses himself to use the restroom.

Maya also felt that nature was calling and left the conference room (page 240).

Goran wonders why the wife of General Felipe would go to a seedy bar that is known for being the place where the criminals and the gangs congregate. You know, that’s a really good question. I almost think that Mr. Coleman, if he really was a world famous investigator, should have asked himself that question already and started investigating.

Concho mentions that the lighthouse went out a few times recently and during those times some ships hit the reef and sank and there was no wreckage and no survivors. Joey finds this suspicious and wants to talk to the head of their Search and Rescue team. What? No Coast Guard?

Maya comes back in just as Joey says that he and his sister will dive to the bottom of the rocks and investigate. Concho scoffs and says that’s impossible because it’s way too deep and no one can hold their breath for any longer than what it takes to reach the bottom, if that. Maya and Joey smirk and say it’s no problem. The governor says it’s too dangerous and forbids them from going. Surprisingly, neither Maya or Joey point out that since they’re royalty, he really can’t forbid them from doing anything. 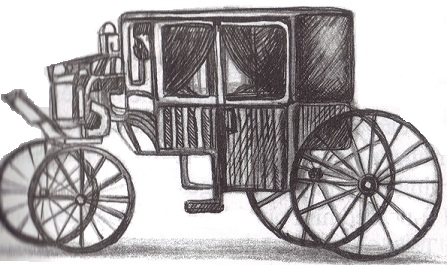 There are Amish buggies here?

Maya and Joey head out. Maya explains that she knows Snowblitz is actually the traitor. See, she popped on her Tarnkappe and followed him out, and he didn’t actually go to the restroom. Instead, he ran out outside across the street to where all the carriages are parked and hopped inside one with two woman and told them everything that was discussed in the conference room, and one of the woman was named Ginger and she gave Snowblitz a bag of coins.

These are the most incompetent criminals I think I have ever met.

“Excellent work, Maya! You did the right thing at the right time with the right results but now we need a good plan.” (page 249)

4 Responses to “Part 9: My Needs and My Feelings”