Maradonia™ and the Gold of Ophir » Part 19: Enough of This Drama 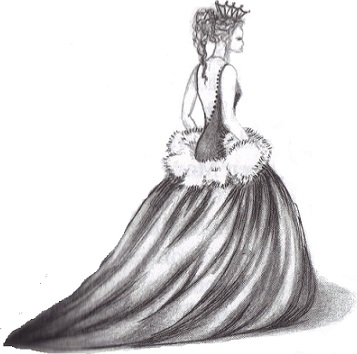 Barbie doll figure much? I hope that isn’t supposed to be Maya, because god damn, she needs a cheeseburger.

Senator Hilton and Judge Kingston decide they need to keep Genarius’ death and the crowning of Maya a secret for awhile. Because they’re afraid that announcing this will lead to riots caused by the enemies of Genarius or something. Anyway, they’ll announce things after Maya is crowned and Genarius has been buried. Now, maybe this is just me, but I feel like this would cause even more problems. I admit, Genarius biting it (especially via suicide) would cause some unrest and maybe even some rioting. So here’s how you handle it: immediately send out messengers calling everyone together, announcing the tragic death of Genarius when he peacefully passed away in his sleep the night before, and that Maya will be crowned immediately. Everyone can mourn Genarius’ passing while celebrating (or, if they’re being realistic, groaning inwardly) Maya’s crowning, and that would be that.

Having the entire thing happen secretly would only make people suspicious. Some would doubtlessly suspect foul play and that Maya had had a hand in Genarius’ death (and they’d be right, but we’ve already been over that). People would be angry that Genarius was buried in secret and they weren’t able to pay their final respects. And they’d be angry the whole succession of power had taken place behind the scenes without any transparency.

The next day the city elders gather and Hilton announces that Genarius’ will says Maya will be the queen. Hilton pulls out the sword Titus and touches Maya’s shoulders and then her head. And just like that she’s the queen. Everyone bows down and she gets an enormous crown. And then….her face starts glowing. Because the deity (it’s not specified, but I assume we’re talking about King Roach) is anointing her with glory.

When the small assembly gazed at the face and the hands of Queen Maya and realized some kind of a supernatural glow, they were amazed and bowed down again (page 658).

Naturally. Maya is just that special that God himself has to make her glow. Also, that sentence is atrocious. Realized some kind of supernatural glow? What does that even mean?

Judge Kingston gets up with tears in his eyes and talks about how awesome Maya is and how she’ll bring Maradonia together with Tyronia and stuff like that, and then Parnell gets up.

Parnell appeared and said, “A snack and something to drink will be served in the dining room” (page 659)

Isn’t that nice? They’re getting a snack!

Maya heads over to the funeral and finds Libertine and the other doves sitting on the pyre, which seems a little disrespectful, but okay. Maya looks at the corpse and cries for a while. Then she looks at Libertine and is suddenly starts wondering why Libertine didn’t realize what Genarius was up to and stop him from committing suicide. Well done, Maya. Blame someone else for your own incompetence.

She doesn’t say anything to Libertine, though. Instead she delivers a very dramatic monologue about how awesome Genarius was and finally comes up with something they should all shout to Genarius as a way of saying goodbye:

I got chills reading that.

They burn Genarius and are watching the smoking remains of his corpse when a messenger arrives and explains that over 120 insurgents have stormed and occupied City Hall. The elders start freaking out, but Maya isn’t worried.

Maya boards the dragon, Dasha, along with Hilton and Kingston, and they fly to the barracks, where she orders General Goran to take four hundred soldiers, surround City Hall, and arrest anyone who flees. Goran, of course, demands to know what the fuck is going on and why she’s wearing the crown of Maradonia.

Maya puts her Tarnkappe on and she and the dragon fly invisibly to City Hall. After they arrive, she tells Dasha to fly around and make a lot of noise to get everyone distracted. Then this happens:

Queen Maya, trained by the best sword fighters in the Valley of the Hovering Spirits, waited for the moment when everybody on the plateau was looking up, watching the dragon.

Then she acted fast… and nearly forty men lost their lives in a blitz action, slain by Titus in the hand of Queen Maya (page 665).

Just like that. No offers to accept their surrender. Nothing. She just slaughters forty of them. FORTY OF THEM. And what do you want to bet she isn’t going to lose any sleep over their deaths?

Everyone else freaks out and runs outside and are promptly arrested.

You know, I bet if Maya had only killed, say, ten or fifteen men, it would have accomplished the exact same thing without ending nearly as many lives. Oh well.

A shooting star whistles across the sky and then stops in midair and hangs there for a while and then vanishes. Setting aside the many physical impossibilities described here, isn’t it a little…I dunno, over the top? I get that Maya is the Chosen One and all that, but did we really need a dramatic shooting star?

The public is informed of Genarius’ death and everyone is completely fine with Maya taking over.

Now, Queen Brunhilda was a massive woman. She was sitting on two chairs and covered her sister more or less with her body (page 669).

Krimhilda appears to be ignoring Joey, but then we jump inside her head and find out she’s quite taken with Joey, despite him being…fifteen. But she’s carefully hiding her interest. Unfortunately, Brunhilda happens to glance over and sees Joey ogling in that direction and assumes that Joey has the hots for her. Which I have a bit of a hard time buying. I think, Brunhilda being a fatty and Krimhilda being a hottie, that Brunhilda probably has low self-esteem and would automatically assume that Joey is interested in her sister, and not her. However, the thought of an obese woman frantically pursuing a 15-year-old is entertaining enough that I’ll let it slide.

The party gets started and Joey asks Krimhilda to dance. She agrees and they start dancing. They gaze deeply into each others’ eyes and forget who and where they are and float away on clouds. It’s very romantic. Then they kiss, which is also very romantic. Brunhilda is infuriated and starts yelling but suddenly a captain named Balthazar with a big red beard pops up and invites Brunhilda to dance and she is all about that beard, despite it probably not being that unusual, and she agrees to dance. And within the space of a page this entire conflict is resolved. Whew! Dodged a bullet there.

They even got pretty wild because Brunhilda loved the wine of Maradonia and after she emptied the second gallon she got real friendly with Balthazar (page 672).

Holy shit! I’m not referring to the implied sexual content, but…two gallons of wine? That’s 258 fluid ounces of alcohol in the space of….I’m guessing a few hours. That’s incredible. It’s like Brunhilda is playing the same drinking game I am.

For no reason, Maya sends Joey to the shore to chat with Aquamarisha, queen of the mermaids. She gives him a present of a basket of fruit. Joe chows down and the fruit is amazing.

Chapter Sixty-Nine – The Gold of Ophir

Whoa! I wonder if this chapter will be even remotely related to the title of this book?

Suddenly, the mermaid Morgana appears and waves at Joey, who heads toward her, but an inner voice tells him to stop, turn around, and run back to the banquet. But he doesn’t. In fact, he doesn’t even stop and wonder why some strange voice is talking inside his head, which usually gives most people a moment’s pause.

Morgana explains she can take Joey to the Gold of Ophir. Joey is interested, so he tells his guards to take the fruit back to Maya and then strips to a t-shirt and boxers. Tesch throws in a ‘And so it was….’ and down they go. They swim along for a bit and go through a cave and tunnel and finally come up at a small island and there’s hundreds of boxes. Joey breaks one open and sure enough, it’s the gold they’ve been looking for. Well, technically they haven’t really been actively looking for it, but, you know, never mind.

Joey wonders why the bricks of gold are so heavy, which really cements him as a total idiot, in my mind, if he hadn’t already been cemented dozens of chapters ago in Book One.

Chapter Seventy – Trapped on a Pile of Gold

Joey wonders how Morgana brought all the gold here, but Morgana has vanished. I do wonder why he thinks Morgana brought the gold there, instead of assuming that the thieves just left it there for the time being. I mean, that makes a bit more sense than a mermaid moving thousands of tons of gold all by herself.

Joey is worried. He realizes that he’s now trapped. Time passes. He yells that he needs to get back to the party, because Maya and a princess are waiting for him. This turns out to be the wrong thing to say, because Morgana shows up and reveals that she doesn’t want Joey thinking about other princesses. She explains that she’s in love with Joey and that her life has no meaning when he’s not around. It turns out that Morgana did bring all the gold here, because she knows that humans like gold and figures Joey would be all about that shit when stranded on an deserted island.

Joey apologizes, explains that he does like her, but as a friend, and in fact he’s in love with Krimhilda. Unfortunately, Morgana doesn’t care.

“You can fall in love with whoever you want! The fact is… it won’t matter! You’re mine! I will never give you up. And believe me, my love, nobody will ever, ever take you away from me.” (page 686)

Joey tries to convince her to take him back to the mainland, but Morgana is having nothing of it. She tells him that when they find his robe and sandals on the beach, they’ll assume he drowned. Then she takes off. Joey is very distraught, but figures he doesn’t have anything else to do besides get some rest, so he falls asleep.

I have to say, this is all completely out of left field, but I still find it monstrously entertaining.