Chapter Fifty-Nine – The Valley of the Hovering Spirits 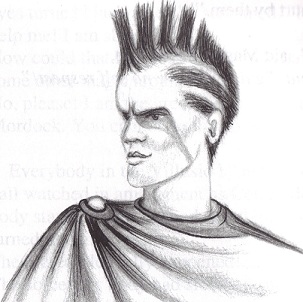 That is an intense haircut.

I’ve mentioned this before, but Tesch really needs to work on her chapter lengths. I’m not saying they need to be exactly the same length or even close to the same length, they just need to be reasonable. Most authors don’t have a huge problem doing that.

Tesch is not most authors. Her chapters are, in many cases, completely arbitrary, ending randomly without any sort of logical gap or cliffhanger that usually denotes chapter splits. Some of her chapters are only one or two pages long. Other chapters are like this one, which checks in at forty pages.

Fortunately, nothing really happens in this chapter, so it won’t take too long.

Later, Maya sits down and starts thinking. She knows she needs to get Michael back to Genarius soon, but before that happens, apparently she needs to visit the River Valley to…

“…to get an education in the art of fighting with one or with two swords at the same time.” (page 567)

Maya thinks about it for awhile. Apparently, learning how to swordfight is “imperative to her future”. Because it’s not like she’s completely indestructible and has a magical Deus ex Machina hat that renders her invisible and allows her to cross football fields in a single stride.

That twilight Maya had a terrifying nightmare (page 568).

Twilight gives me terrifying nightmares too.

The next day they’re getting ready to go to this valley, but Maya is wearing a dress and soft shoes. Dominatio makes her go to the armory and get leather boots, clothes, gloves, and a helmet, along with some wooden practice swords and shields. Fortunately, the armory is well-stocked with equipment that fits sixteen-year-old girls and they take off shortly afterward on dragon-back.

They arrive in a desert and it’s barren and desert-like.

A red fox sat on the side of the place and gave Maya a contemptuous smile (page 570).

Dominatio spends a great deal of time explaining. For each day for twelve days one of the spirits of the great warriors, who are forced to live here and train people for reasons that don’t really make sense, will train Maya. Then on the thirteenth day they’ll bust out the actual weapons and Maya will have to fight all twelve of them one after the other. Tesch misspells ‘Spirits’ as ‘Sprits’, which amuses me.

As soon as Maya draws first blood, the spirit will be redeemed and then get to move on to the wonderful afterlife or something, which doesn’t really make sense. Why are these warriors chilling out and waiting for Maya? Wouldn’t they just let themselves be pricked before while fighting someone else so they can go to the Happy Hunting Grounds?

Nothing happens for a few pages and finally the warriors show up. They bitch for awhile about having to fight Maya, so Dominatio quotes Andrew Carnegie:

“The first man gets the oyster. It will be an honor for the first man to train and fight Princess Maya. The second man gets the shell as well as all the others. You will be astonished about the brain power of Maya.” (page 577)

The three wise guys and the dragons all leave except for one dragon, Dasha. The warriors start training Maya and dispensing their wisdom. One spends a page talking about how the most important thing is footwork. The next day the duels start. They fight all day. Without stopping. We’re talking about fourteen straight hours of strenuous exercise. I have to call bullshit on that one. That’s pretty much impossible for a trained warrior in peak physical condition, let alone a flabby sixteen-year-old.

Of course, by the end of the first day she’s able to whack the trained warrior in the ear with her wooden sword. He bleeds and his blood redeems him and off he goes to Heaven. I guess she’s a prodigy. I do wonder, though, why Dominatio explicitly said that Maya was going to fight all twelve guys on the thirteenth day when that clearly isn’t the case, since she can weed some of them out by injuring them during training.

The next day Maya fights a guy with a net and a trident. I have a feeling Tesch watched Gladiator

shortly before writing this scene. The warrior tries to net Maya but her lightning reflexes allow her to avoid the net. After that narrow escape, she recalls what they taught her about footwork and is able to use it to evade NetGuy for the rest of the day, and even whack him in the knee.

That night Dasha shows up with magical food from the three wise guys which take away all of Maya’s aches and pains and restores her energy, because what would a grueling trial be if you take away the grueling part?

She fights the Roman and keeps dancing away from him and of course, his years of training and experience aren’t able to overcome Maya’s three days of training. Eventually his sword splinters and Maya whacks his shoulder and he bleeds and heads off to heaven.

You know, if a skilled author was writing this, I’d suspect the soldiers were deliberately throwing the fights to get into Heaven, and Maya only thinks she’s doing awesome, but somehow I doubt that’s what Tesch is going for.

That night Maya breaks down crying. Normally I’d have no problem with this, because it’s good characterization, but of course Tesch has to make it weird.

Maya started to cry and said, “I miss my brother Joey. If he would hold my hands right now, I would feel so much better” (page 586).

She angsts about how much fun her school friends are probably having. Uh. I wasn’t aware Maya had any friends. They certainly haven’t been mentioned and Maya hasn’t spent any time thinking about them so far.

The next day she fights a shmuck with a sneezing problem that she stabs in the throat. To Tesch’s credit, the narration explicitly states that Maya was only able to defeat him due to his own sneezing fit which pretty much made him run into her sword.

Tesch throws in a ‘And so it was…’ and Maya fights everyone else. Even though she’s exhausted and covered in bruises, she’s still awesome at fighting.

The last three swordfighters were black men. Maya, although she was used to strong fighters, was frightened just to look at them because she detected a burning fire in their eyes (page 590).

She fights the black guy, and then this happens:

Then, suddenly, he punched Maya in the stomach, and when she bent over to the front, he hit her so hard with his other sword over her lower back that she fell face down into the sand (page 590).

Quickly she cupped her hands around her mouth and shouted at the top of her lungs, “Listen to me! I am Maya, the princess of Maradonia! I will kill you, when I’m done with your two companions.” (page 591)

That’s our Maya, threatening to kill people because of what happens in practice.

Dasha gives Maya some medicine that she drinks and falls asleep. She dreams about Libertine, who explains that she’ll need this training with swords for when Maya is the ‘Law of Maradonia’. As horrifying as the idea of Maya being the law of Maradonia is, it’s even more horrifying to think she’ll be wielding a sword when she does it. Being the law usually means sitting in judgment and using your logic and reason to make carefully considered decisions, not waving a scimitar that some watery tart lobbed at you.

Maya fights the last two guys to a standstill and does an awesome job. She also sees Sagitta the eagle flying around. Remember Sagitta? It’s been awhile.

Finally, it’s the thirteenth day. Maya is picking out her real sword when Joey shows up on Emoogie. She talks to Dominatio a bit and wonders if she should go invisible and fight the men that way. That way she can bleed all of them so they go to Heaven while not suffering at all.

The fighters are all hanging out in the arena and warming up, so Maya decides to do the honorable thing and charge in and take them all by surprise while they’re still stretching out.

Before the fighters knew what was going on, Maya killed two of them and injured the rest seriously with her double-edged iron sword.

King Joey could not believe his eyes! That was a big shocker for him and he realized in a split second that his sister was an experience sword fighter and had changed dramatically since she returned to Selinka (page 599).

She’s even better than Eragon.

But…only three of them disappear. Even though all six were wounded and bleeding. So all six should have gone immediately to heaven, but only three do. Why, you might ask? Well, uh…anyway, only three disappear, leaving three behind, including that one angry black guy. They hurl a few threats and Maya agrees to fight all three at the same time, but on her rules. Which involves a Tarnkappe. She vanishes and the fight begins. She beheads one guy, stabs the other guy through the heart, and then squares off against the black guy. He’s carefully watching the footprints in the sand and puts up a fight, knocking sand into Maya’s eyes. She recovers, runs around the guy, and chops him in half. Vertically. Right through the top of the skull and through his entire body, which falls in either direction.

That’s a very pleasant image to put into a children’s book. What has Tesch been watching recently, Kill Bill?

Maya talks about how she’s redeemed the warriors and then the earthquake starts. They jump aboard the dragons and fly away before the flood waters arrive. Hooray!

Drinks: Too many to count.