Maradonia™ and the Gold of Ophir » Part 4: A Herd of Flying Pigs

Sutornia and Cassandra have warned the psychic leadership not to invite any guests, unbelievers, or critics of the psychic community to this special meeting, because they might die of a heart attack.

The meeting was for insiders of the psychic congregation only and the warning was so severe and creepy that it would send shivers up the spines of even the most potent psychic leaders (page 73).

Sounds terrifying. Actually, it sounds like a rumor that the psychic leaders would laugh off as a dramatic effect. Then again, I still find it stunning that there’s a huge, thriving psychic community in Oceanside. Whatever a psychic community is.

Sutornia and Cassandra, who am I hereby abbreviating to Suttie and Cassie, have explained what rituals they should perform to honor Plouton:

They should bring thirteen healthy pigs, just over the age of one year, three goats, twelve chickens and three roosters for the animal sacrifice, and sprinkle the blood of these animals over the whole congregation (page 73)

The fresh blood of the pigs had to be sprinkled on every attendee of the meeting from the top of the head, then over the face, the hands, the body and down to the naked feet (page 73).

Seriously, holy shit! Setting aside the squick factor in a book aimed at young children, there hasn’t been any signs that the Powers of Evil believed in or used animal sacrifices at any point throughout the first book. Although they do believe in human sacrifice…

Tesch spends half a page explaining why the Panorama Ravine is the perfect place for such activities, because it’s so remote, and then we’re back to Plouton, who is hunting Maya and Joey. He isn’t able to find them because there are so many humans around and he needs the help of the psychic community. Which is strange because it seems like Plouton, Suttie, and Cassie are far more powerful than any of the psychics in Oceanside.

People arrive at the Ravine early to set up. They slaughter the goats, mount their heads on poles, and put the poles in a huge triangle around the ravine. I really hope this scene makes it into the second movie.

We go back to Joey, who puts on his Tarnkappe and follows Libertine to the ravine. They hide in a pine tree nearby with a good view of the proceedings.

Joey wondered and said, “I did not know that Oceanside had such a large group of psychics in the area.”

“Joey, they are everywhere in your world… in great numbers.” (page 76)

Spooky! And it’s also very clever of Tesch to not give a specific name to this so-called psychic community, so I can’t do two minutes of research and point out that they aren’t really that large.

Before long all the psychics are screaming and dancing and completely out of control. Suttie and Cassie have touched everyone on the forehead and sprinkled them with pig’s blood. Now their bodies have started changing:

Joey swallowed hard and his chin quivered when he observed from his position behind the pine tree, that the bodies of the dancers changed their appearance.

Their human bodies changed into the bodies of animals…pigs…the closer the midnight hour came. Joey held his breath (page 77).

The moon reaches its zenith and silence falls. And suddenly it’s just a herd of pigs staring at Plouton, who appears from nowhere. Yes. They changed everyone into pigs.

Joey looked at Libertine and said, “What a scary guy. He reminds me of one of the scarecrows we saw when we crossed the pumpkin fields.” (page 78)

That’s not a scary image, Tesch.

Plouton gets up and launches into a speech about how typically, the psychic community relies on Suttie and Cassie for help, but now they have a chance to return the favor. He explains that Maya and Joey have the Key to the Underworld. The pigs grunt in response. Plouton explains that he’s invited them all because one of them might be able to help him find them because they live in the city. That’s right. He’s not planning on using the collective psychic powers of everyone there to locate Maya and Joey. This entire thing was arranged just to see if one of them happened to know Maya and Joey personally.

And if that was the case, why the fuck did they bother with the whole blood and pigs ceremony? Wouldn’t it be easier, faster, and less noticeable to just call people on the phone and ask them?

But sure enough, one of the pigs is Alana Terrence’s aunt, who explains (because she can still talk in English…which Plouton understands) that there was a girl named Maya who attends Oceanside High School and was proclaiming herself a princess in the middle of the class. And we finally have an explanation for why Maya experienced her whole ‘episode’.

Plouton is delighted. He exposits that they’ll visit Oceanside High School the next day and take care of them. Suttie and Cassie serve the pigs a Wasabani Drink which makes the pigs delirious and then they start floating. Seriously.

But just in case we didn’t get it, Tesch explains further:

The fact was that the congregation of psychics had changed into animals, and were now dancing in mid air around the fire place, but only inside the borders of the goat head triangle…like inside of a strong magnetic field (page 81).

I’m pretty sure magnetic fields don’t work that way. Still, this is a scene that makes me really hope it makes it into the movie.

Libertine tells Joey he should probably leave and pack stuff for Maradonia. Instead of going to school the next day, he needs to get the Tarnkappes and head for the hospital. Libertine will meet him there, but first she needs to fly back to Maradonia and get the Healing Leaves from the Trees of Healing that grow on the Jivin Hills.

Two beautiful women (Suttie and Cassie) show up at the school and explain to the principal, Dr. Schneider, that they’re here to investigate the ‘Maya case’. Dr. Schneider is so captivated by their beauty that he doesn’t bother to ask them for their credentials, or wonder why they refer to it as the ‘Maya Case’, and don’t know Maya’s last name, or which hospital Maya is at. Fortunately, he does know that Maya is in either the Oceanside Foundation or the Bethesda Hospital and she’s in room #333. He also explains that Joey is at school and is just around the corner in class….

They head to Joey’s classroom but he’s not there and pretty soon Schneider realizes that Joey is playing hooky. Suttie and Cassie are disappointed and ask Schneider for Maya and Joey’s last name, street address, and telephone number. Incredibly, even this doesn’t tip Schneider off as being the slightest bit odd. They also want to interview Alana Terrence. Schneider intercoms Alana to his office and starts pulling up Maya and Joey’s information.

I guess Tesch truly believes that a couple pairs of breasts can reduce a man to a stammering idiot, which may or may not be true, but I’m pretty sure it can’t do it to the extent here.

Alana says she has nothing to do with the Maya Case. Suttie explains that she heard from Alana’s aunt that Alana has a rivalry with Maya.

Alana, showing far greater presence of mind than Schneider, demands to see some credentials if this interrogation is going to continue. Schneider shuts things down, though, and says it was just a simple question. Alana gets sent back to her class.

Schneider finally pulls his head out of his ass and asks to see some ID. Things escalate quickly.

“We are not hostile Dr. Schneider, and at the moment we are still talking very friendly with you. We are asking nothing big from you…we just need the home address of Joey and Alana. And listen, if you don’t give us this information right now, you might never see your family again.” (page 89).

Unsurprisingly, the death threats fail to work. Schneider says they can either show some ID or get out of his office, and if they don’t, he’s calling the police.

Suttie and Cassie ask him if that’s his final decision. What is this, Who Wants To Be A Millionaire? But Schneider says it is.

So Suttie and Cassie start floating around in midair.

When Cassandra hit with her head against the ceiling of the principal’s office she said, “The ceiling is not high enough for us. Let us remove our heads…this will give us more room to float freely.” (page 90) 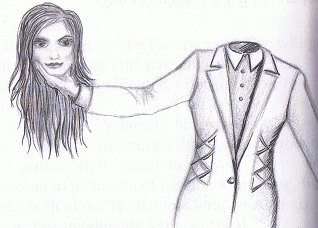 This is my favorite picture of all time.

Instead of…I dunno, floating lower? Wouldn’t that be easier?

I almost gave Tesch a pass on this one, because Suttie and Cassie are doing all this just to scare the shit out of Schneider…but they don’t need to invent a moronic reason for why they’re doing this. Just take your heads off, he’ll get the point.

The two beauties turned their heads three times to the left side, one time to the right and removed their heads from their bodies (page 90).

That’s right kids. Just turn your heads to the left three times and then once to the right. It’ll unlock and then you can take your head off!

“Would you be so kind as to give us the home address of Joey and Alana or would you like to carry your own head in your hands?” (page 90)

That’s ‘addresses’, but even so, it’s a decent threat. Schneider agrees, but before he can do so he has a heart attack, and falls over face-down on his desk, where his favorite metal pen, which is standing upright in its holder, squelches through his eye and into his brain.

. Also, here is yet another scene I’d really like to see in the movie.

A secretary hears the thump and comes in and finds the body. Suttie and Cassie are gone. She screams and they call the cops. They promptly close the school for the day and send everyone home, but not before a rumor starts that the school is haunted by evil spirits [??].

Suttie and Cassie leave the school just before the cops show up and have a bit of conversation:

“The people here in this world are caught in a net of stupidity which they call materialism. They are even proud of this level.”

“Yes, these people are strange and many of them are absolutely hopeless. They die on us when we show them just a tiny little bit of energy from the Fifth Dimension.” (page 92)

I’m not going to try and argue that people aren’t stupid, because they are, but I have to disagree with Cassie. You took your heads off and threatened to rip his head off as well, which gave someone a heart attack, which he probably would have survived if it hadn’t been for his pen.